Rodgers and Hammerstein’s Oklahoma! Bursts Onto the Ogunquit Playhouse Stage Just in Time to Celebrate its 75th Anniversary! 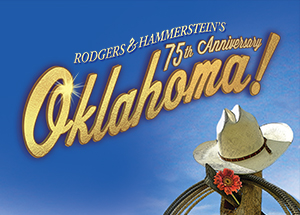 Rodgers and Hammerstein’s great American classic Oklahoma! bursts onto the Ogunquit Playhouse stage June 13 to July 7. The Playhouse is thrilled to create an exciting new production of this beloved classic as part of its 75th Anniversary since first opening on Broadway. This groundbreaking musical was Rodgers and Hammerstein’s first collaboration, and in many ways their most innovative, having set standards for musical theatre that are still being followed today. The lively musical features the timeless classics, “Oh, What a Beautiful Mornin’,” “The Surrey with the Fringe On Top,” “I Cain’t Say No,” “People Will Say We’re in Love” and of course the triumphant “Oklahoma!”

“Now, with Oklahoma! celebrating its 75th Anniversary, it seemed the perfect time to bring this beloved classic to our stage. The Ogunquit Playhouse production will feature the original designs from Cameron Mackintosh’s London and Broadway revival of Oklahoma!, and Susan Stroman’s choreography, which will be tailored for our production by Susan Stroman’s Associate Ginger Thatcher. Our show will be helmed by Fred Hanson, who together with an outstanding cast will create a fresh, lively and exuberant Oklahoma!,” stated Executive Artistic Director Bradford Kenney.

The high-spirited rivalry between the local farmers and cowboys living in Western Indian Territory at the turn of the twentieth century, provide the colorful setting for Curly, the confident cowboy, (Stephen Mark Lukas) and Laurey, the beautiful, head-strong farm girl, (Taylor Quick) to play out their love story. Throw in a fierce rival vying for Laurey’s attention, one flirtatious fiancée, a reluctant suitor, magnificent choreography and one of the most beautiful musical scores ever written and you have a recipe for a rip-roaring good time!

Individual tickets are on sale now with prices starting at $52. Three and four-show packages are also available for the current season. Gift certificates are also on sale. For tickets visit www.ogunquitplayhouse.org, the Box Offices located at 102 and 10 Main Street, Ogunquit or call 207-646-5511.