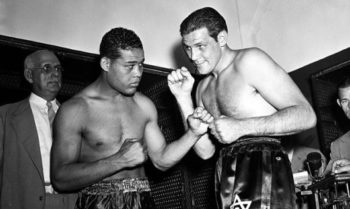 Poking around on social media recently I came across a discussion where the “experts” were once again going on about how today’s big heavyweights would be just too strong for the champs from previous eras. There was little disagreement that guys like Wilder, Joshua, and the Klitschko brothers would walk through fighters such as Joe Louis, Rocky Marciano, and Jack Dempsey. One person commented that all of the big heavyweights of the past 25 years would have beaten all of the smaller heavyweights that came before them. These people seem to believe we were living in Munchkin Land until the past couple of decades. Using their reasoning we would have to believe Jess Willard and Primo Carnera were the greatest heavyweight champions of the past century since they were comparable in size to today’s fighters.

I could go on about the number of “small” heavyweight champs who took apart men much larger in size than they were. I have written in the past that in many of these matchups where the champ was taking on a much larger opponent, not only did the smaller man win, but it was not even close to being his toughest fight.

Since it seems so many of these experts just can’t get past believing size is the most important factor in deciding the outcome of a heavyweight fight I thought I would once again come up with an example of why someone like Joe Louis would have had no problem defeating today’s crop oversized champs. 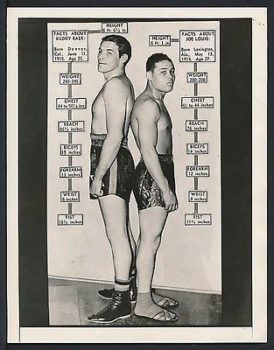 Buddy Baer was a contender for the heavyweight title in the early 1940s. He was the brother of former champ Max Baer. At 6’ 7” and weighing in at around 250 pounds he was comparable in size to today’s heavyweights. Buddy was also a tremendous puncher scoring 49 knockouts in his 53 wins. He lost only 7 fights and was stopped just twice. Baer was also lean and agile. He had excellent boxing moves to go along with his great strength. Unlike today’s wild swinging heavyweights, Baer threw short, accurate punches.

In 1941, Buddy stopped Tony Galento a win that put him in position to challenge heavyweight champ Joe Louis. The fight was set for May 23, 1941 in Washington, DC. Louis weighed in at 201 3/4 to Baer’s 237 pounds. Buddy, at 6’7”, was also 5 inches taller and had a much longer reach. Seeing the two of them step into the ring together gives you a sense of what Louis would have looked like matched up against Klitschko or Wilder. The one difference being that Buddy Baer was a much better boxer that either Deonty or Vlad.

Boxing experts covering the bout in 1941 were bit more savvy than those around today. They made Joe Louis a ten to one favorite over Baer despite the difference in weight and height. The experts I hear from today would have had Baer a hundred to one favorite based on his size. After all, how could Louis possibly beat someone so much bigger than he was? We all know Wilder and Klitschko would just walk through Louis because of their size and strength. The same would have to hold true for Baer. 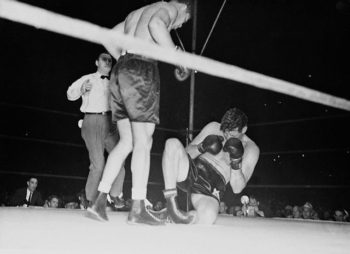 A funny thing happened when the bell rang for the start of the fight. Baer came out aggressively and went after Louis. Baer was not prone to the wild swings such are used by Deonty Wilder. Instead, he used much shorter and well placed punches. He did back Louis up. He even managed to deck Joe with a short and accurate left hook, sending Joe through the ropes. But after that  the fight became pretty much a one sided affair. You see, Louis did something that today’s experts aren’t terribly familiar with; He used his great boxing skills to turn Baer’s size against him. Joe was able to slip inside the big man’s arms and hit him with short and powerful punches that hurt him.

Buddy Baer was no quitter and did manage to stay in the fight trying his best to overpower Louis, but by the sixth round he was nearing the end. In that round Louis floored Baer three times with devastating and accurate blows. The final knock down finished him off. There was some controversy over the ending of the fight as Baer’s handlers argued the last knock down had come from a punch that was landed after the bell. Baer was protecting himself at the time it was landed, so if the bell had indeed rung before the punch had landed neither fighter heard it. It made no difference in the outcome of the fight.

It did make a difference in how the fight was ruled. Baer was helped back to his corner and was on his stool when the bell rang for the seventh round. His handlers argued he should be given the win because of a foul. Referee Arthur Donovan did not agree and instead disqualified Baer because his seconds would not leave the ring and allow the fight to continue.

The minor controversy was enough to get Buddy a rematch with Louis, and on January 9, 1942 the two met again at Madison Square Garden. This time Baer came in even heavier for the fight probably figuring the extra weight would work to his advantage. That theory feel apart before the bell could ring ending the first round. Louis was devastating in taking the giant apart dropping him three times in less than three minutes with the final knockdown being for the ten count.

If you can’t seem to visualize Joe Louis handling himself against the overgrown champs of today just take a look at his matches with Buddy Baer. You will see how the old adage “The bigger they are, the harder they fall” applies.

Joe Louis would have no problem dealing with today’s unschooled giants. They would provide target practice for him. To say a Deonty Wilkder would be too big and strong for Louis is simply laughable. Joe would have had a field day with him.

It should also be noted that when Louis and Baer fought the second time WW II was underway. To help with the war effort Louis donated his entire purse of $47,100.94 from the fight to the Navy Relief Fund. Not only was Joe Louis a great champion, he was also a great American.