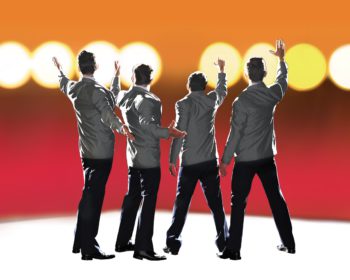 It is an exciting time for theatre goers who will be traveling the short distance to Ogunquit, Maine this summer to attend performances during the 86th season at the legendary Ogunquit Playhouse. In addition to an already fabulous lineup that includes productions of Smokey Joe’s Cafe, Oklahoma!, An American In Paris, and Grumpy Old Men, Executive Artistic Director Brad Kenney has announced that the Northeast regional premiere of Jersey Boys will cap off the season. The hit show featuring the music of Frankie Valli and The Four Seasons will run from September 5 to October 28. Tickets will certainly be in demand for this one.

This is as fine a lineup as I have seen from the amazing creative team at the Playhouse and will certainly be an enjoyable way to mix the theatre experience in with all of the other wonderful things the Ogunquit area has to offer for summer fun.

I’ve been covering the Ogunquit Playhouse for a number of years now, and while no theater is able to bat 1000, the creative team under the very able leadership of Brad Kenney hits the ball to the fences much more often then not and has a very strong record of home runs to its credit. This is as close to Broadway quality as you will find outside of New York City, and I have to say some productions I have seen surpass those on the Great White Way.

The Playhouse has received 17 award nominations from Independent Reviewers of New England (IRNE) for 2017. Five nominations go to Bullets Over Broadway. It been nominated for Best Musical, In addition, Reed Campbell is up for Best Actor for his role as Cheech, and Sally Struthers for Best Supporting Actress for her performance as Eden Bent. Jeff Whiting is up for two awards, Best Choreography and Best Director.

Christopher Ash has been nominated for Best Production Design for his work on From Here To Eternity.

Ragtime has been nominated for eleven IRNE Awards including Best Musical, Best Ensemble, and Best Director to Seth Sklar-Heyn. Jeffrey Campos for Best Music Director, Kevin Heard for Sound Design, and Jesse Robb for Best Choreography. Kirsten Scott is nominated as Best Actress for her role as Mother, and Best Supporting Actor nomination goes to Julian Decker for his performance as Little Brother. Josh Young and Darnell Abraham both have been nominated for a Best Actor Award parts, Decker for his role as Tateh, and Abraham for Coalhouse. And finally, my favorite, Tyler Wladis who has been nominated as Most Promising Young Performer for his outstanding performance as The Young Boy.

Bradford Kenney, Executive Artistic Director at the Ogunquit Playhouse said, “To be recognized once again by the IRNE nominating committee alongside some of New England’s leading theatres is a great honor. We are extremely proud of our beautiful production of Ragtime, the hilarious Bullets Over Broadway and of our regional premiere of From Here to Eternity. Congratulations to our exceptional creative teams and casts who made our 85th Anniversary season a success. We want to extend our congratulations to all nominees who have been recognized by the IRNE Awards.”

The awards ceremony will take place on April 23 at the 1200 Hotel in Brookline, Ma and will be an exciting time for all involved. Pass the envelope please.