“It was midnight when eighteen-year old Archie Moore jumped off a freight train at Poplar Bluff, Missouri. He ran four blocks to catch a truck that was to bring him back to Civilian Conservation Corps camp 3760. It was the summer of 1935….” So begins Murderers’ Row: In Search of Boxing’s Greatest Outcasts by Springs Toledo. To say that this book is just about the lives of eight of the greatest boxers to never win a world title is like saying John Steinbeck’s The Grapes of Wrath is just about a poor family in Depression era America. Springs Toledo has written not only a terrific boxing yarn, but an important social and historical document as well.

“To say this book is just about the lives of eight of the greatest boxers to never win a world title is like saying John Steinbeck’s The Grapes of Wrath is just about a poor family in Depression era America.” 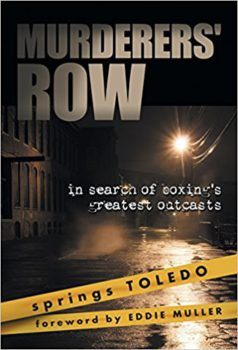 Imagine you are the world’s greatest pianist but the powers that control the concert world will never let you play Carnegie Hall no matter how many great reviews and accolades you receive. Now imagine you are the top rated contender in the toughest and most brutal of all sports but no matter what you accomplish you are denied your ultimate goal—the opportunity to fight for a world championship. That was the situation for eight extraordinarily talented black professional boxers: Charley Burley, Holman Williams, Lloyd Marshall, Eddie Booker, Bert Lytell, Aaron “Little Tiger” Wade, Jack Chase and The Cocoa Kid. At various times during the late 1930s and through most of the 1940s they were all top rated contenders in several weight divisions. Yet not one of the reigning world champions would get into the ring with them. They were denied a shot at the title for reasons that included race, economics and the mob.

In this masterfully crafted and thoroughly researched paean to eight largely forgotten ring greats we not only learn about the amazing athletic achievements of these gifted artists, but also how their futile attempts to land a well-deserved title shot impacted their lives and the lives of their families.

In the early decades of the last century boxing was the only major professional sport that was open to African-American athletes. It was also one of the few professions that gave blacks access to the type of wealth and fame that would have been unthinkable a generation earlier. For the poorest segments of society boxing was seen as a way to escape poverty and attain riches and fame. Nevertheless, the black man’s status as a second class citizen was a burden that extended into the sport of boxing as it did everywhere else. Racism played its part but so did economics. If someone offers a champion enough dough to risk his title against a tough challenger you’ve got a match—most of the time. But if there is a good chance a popular champion will lose his title to a fighter who is less of a drawing card—and many a top black fighter did not have the same following as a popular but less talented white champion—a promoter would be less inclined to put on the match. Yet, as Toledo points out, sometimes even the right price was still not enough to entice a champion into the ring with these dark destroyers.

It was common knowledge that having the right “connections” could help ease the way to a title shot. A mob managed boxer had a better chance at lucrative matches in major arenas than an independent. Realizing that their only chance to secure a title fight involved handing over their careers to the organized crime figures who controlled big time boxing, a few decided to go that route. But in making a bargain with the devil these proud warriors paid a heavy price that included being ordered to throw fights.

“Abused and cheated and unable to make a decent living, some turned to drink, further eroding their spirit and their skills”.

Toledo takes the reader behind the scenes and reveals the sordid underbelly of boxing. Abused and cheated and unable to make a decent living, some turned to drink, further eroding their spirit and their skills. Most poignant is the story of The Cocoa Kid (real name Lewis Hardwick). He was the son of a Puerto Rican mother of Spanish descent and an African American father. The Cocoa Kid had over 246 professional fights. For eighty-one months between 1933 and 1947, he was a top contender in the lightweight, welterweight, and middleweight divisions. No champion dared face him in his prime, not Barney Ross, not Henry Armstrong. By the late 1950s Cocoa was wandering Times Square, homeless and suffering from dementia. Admitted to a hospital, he didn’t know who he was. Fingerprints sent to the Navy (he was a veteran) identified him. He died alone and forgotten on December 2, 1966.

The other stories are just as compelling, if not as tragic. Aaron “Little Tiger” Wade, least known of the group, was for a time rated the third best middleweight in the world. A squat 5’5” powerhouse he defeated Archie Moore, Cocoa Kid and Bert Lytell. Faced with the pressure to throw fights he became a bit unstable and battled alcoholism for much of his career, sometimes fighting when drunk. Wade’s story ends well. In his mid-40s he became a born again Christian, stopped drinking, reunited with his family and took a full time job at the Gallo Wine warehouse (a job that certainly tested his resolve). He also began studying for the ministry, eventually opening a store front church in the Fillmore district of San Francisco that served the poor of his community.

“All told, Marshall and the other Murderers’ Row contingent defeated a dozen future and former champions from featherweight to heavyweight no less than 17 times.”

Lloyd Marshall, one of the most feared fighters of his era, whipped Jake La Motta, Joey Maxim and Ezzard Charles—three future champions at middleweight, light heavyweight, and heavyweight. All told, Marshall and the other Murderers’ Row contingent defeated a dozen future and former champions from featherweight to heavyweight no less than 17 times.

What makes this book such an enjoyable experience to read is Toledo’s descriptive and colorful writing style. He not only knows his boxing history, he understands the nuances of boxing technique. In his segment on Charley Burley, who many consider the best of the golden eight, he writes: “Charley Burley’s style was as complex as tax law. An uncanny sense of timing and distance allowed him to find blind spots and he would often leap into shots that carried enough force to anesthetize anyone, including full blown heavyweights.”

Burley tried for years to get a shot at Sugar Ray Robinson’s welter or middleweight titles. Robinson, along with Joe Louis and Henry Armstrong, had proved to be the exception to the rule. These great black fighters managed the rare accomplishment of becoming cross over stars whose extreme popularity cut across racial lines. No doubt if someone offered enough money to Ray he would have complied, but it would have taken more than a small fortune to entice him into the ring against as formidable a challenger as Burley.
Since they were so often dodged by the top contenders and champions the best way for the elite eight to keep active and earn a payday was to fight each other as often as possible. And fight each other they did!—no less than 62 times. “It was a frenzy”, writes Toledo, “a free-for-all, a battle royal from the bad old days.” They matched up so evenly that a win in one fight could not guarantee the same result in a rematch. In the words of boxing scribe Jim Murray, who witnessed many of these classic encounters, they “put on better fights in tank towns than champions did in Yankee Stadium.”

The last of the Murderers’ Row had his final fight in 1951. Eventually their names drifted off into obscurity. As Springs Toledo points out, they would have remained mostly forgotten if not for Archie Moore. The wonderful “Old Mongoose” would have been counted as a Murderers’ Row member had he not won the light heavyweight title in 1952, at the age of 36, in his 171st pro fight. During the long and frustrating road to a title shot Moore was exposed to more than his share of boxing’s corruption and injustices. He knew that fate had been kinder to him than his former Murderers’ Row opponents.

“They would have remained mostly forgotten if not for Archie Moore.”

It is to Moore’s credit that he resurrected their names out of sympathy and respect. Beginning in the 1960s, whenever he was interviewed about his own remarkable career, Moore made it a point to mention them by name. Although he couldn’t correct the injustices done to them, he could at least make the world aware of their greatness. After all, who would know that better than Archie Moore? All eight were good enough to fight on even terms or better against him.

It was Budd Schulberg who first referred to several of the elite eight (in addition to other notable black fighters) as “That murderer’s row of Negro middleweights carefully avoided by title holders” in an article for Esquire in 1962. Since then authors Alan Rosenfeld and Harry Otty have given us two outstanding biographies of Charley Burley. And now thanks to Spring Toledo’s contribution the story of the Murderers’ Row is complete. “Consider me something of a private investigator”, he writes, “inspired by the memories of Archie Moore and hired by ghosts.” I have no doubt those ghosts are very pleased with the result.

Mike Silver is the author of The Arc of Boxing: The Rise and Decline of the Sweet Science and Stars in the Ring: Jewish Champions in the Golden Age of Boxing.  All are available at Amazon.com