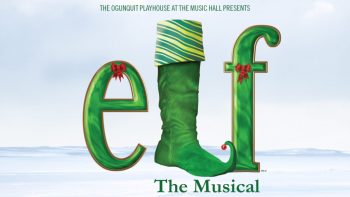 The Music Hall and the Ogunquit Playhouse are thrilled to announce the cast and creative team of Elf The Musical, on stage November 28 – December 16 at The Music Hall in Portsmouth, New Hampshire. Based on the beloved film, Elf The Musical is the hilarious tale of Buddy, a young orphan child who mistakenly crawls into Santa’s bag of gifts and is transported back to the North Pole and raised as one of Santa’s elves. Eventually Buddy’s enormous size and poor toy-making abilities cause him to embark on a journey to New York City to find his birth father, discover his true identity, and help New York remember the true meaning of Christmas.

The Ogunquit Playhouse production is helmed by Broadway director/choreographer Connor Gallagher and features an all-new set designed exclusively for the Ogunquit production at The Music Hall by acclaimed scenic designer Jason Sherwood. Leading the professional cast are New York and Broadway veterans Steven Booth as Buddy the Elf, Diana Huey as Jovie, Jen Cody as Deb, Lothair Eaton as the Macy’s Manager, Annie Edgerton as Emily Hobbs, Blake Hammond as Santa, Philip Paul Kelly as Mr. Greenway, and Christopher Russo as Walter Hobbs. The role of Michael will be played by Calvin Middleton.

Steven Booth stars as Buddy. Mr. Booth recently starred as Charlie in the first National Tour of Kinky Boots, and as Richie in the first National Tour of Happy Days. On Broadway he has performed in School of Rock, Glory Days, and Avenue Q, and for regional theatres has performed in the Signature Theatre’s production of Glory Days, Avenue Q at the Wynn Las Vegas Theatre, Capitol Repertory’s Edges, North Shore Music Theatre’s Three Musketeers, and Coeur d’Alene Summer Theatre’s Pippin.

Diana Huey co-stars as Jovie. Ms. Huey most recently starred in the first National Tour of The Little Mermaid as Ariel. She has performed in numerous New York and

Portraying Deb is Jen Cody. Ms. Cody has starred in numerous Broadway productions including A Christmas Story, Shrek, Pajama Game, Taboo, Urinetown the Musical, Seussical the Musical, Disney’s Beauty and the Beast, Grease, and CATS. Off-Broadway her credits include Cleopatra, The Wild Party, Judith of Bethulia, and Henry and Mudge. In film her voice can be heard in many animated films, including her Annie Award-winning role as Charlotte La Bouff in Disney’s The Princess and the Frog.  On television she has performed in CBS’s Instinct, Bull, Unforgettable, and Blue Bloods, and provided voiceover work for Shrek Live, American Dad, Phineas and Ferb, and Mickey and the Roadster Racers among many others. Ms. Cody was last seen on the Ogunquit Playhouse stage in 2012’s Damn Yankees, 2009’s All Shook Up, 2006’s Cinderella, and was the Choreographer for the 2016 and 2015 smash-hit Million Dollar Quartet.

Lothair Eaton joins the cast as the Macy’s Manager. Off-Broadway Mr. Eaton starred in the original company of Nunsense A-Men, and in the UK Tour of 5 Guys Named Moe. In Regional theatres he has starred in Trav’lin 1930’s Harlem Musical, When Pigs Fly, Sunday In The Park With George, and Show Boat. Additionally, he starred as Papa the Old Steam Train in the Germany, Las Vegas, New Zealand and UK Tour of Starlight Express.

Portraying Emily Hobbs is Annie Edgerton. Ms. Edgerton has starred as Rosie in Mamma Mia! on Broadway as well as in the first two National Tours. She has also performed on Broadway in Kinky Boots, and in numerous Regional and Off-Broadway productions including Fly Me to the Moon, Comedy of Errors, King Lear, Les Miserables, Legally Blonde, Babes in Toyland, Showboat, and Betrayal, among others.

Blake Hammond joins the cast of Elf The Musical as Santa. On Broadway he has performed in numerous productions including Sister Act, Elf The Musical, Billy Elliot, Disney’s The Lion King, Hairspray, The Music Man, Kiss Me Kate, and On the Town, and Off-Broadway in When Pigs Fly, Carnival, and Do Re Mi. Mr. Hammond has also starred in the National Tours of Something Rotten, Cinderella, The Addams Family, and Joseph and the Amazing Technicolor Dreamcoat. Mr. Hammond was most recently seen on the Ogunquit Playhouse stage as Harry in 2018’s Grumpy Old Men the Musical. Additionally he has performed at the Playhouse in 2015’s Sister Act and 2009’s Guys and Dolls.

About The Music Hall

The Music Hall is a performing arts center featuring curated entertainment from around the world in two theaters in its downtown Portsmouth, New Hampshire campus—one, a landmark 1878 Victorian theater, designated an American Treasure for the Arts by the National Park Service’s Save America’s Treasures Program, the other the intimate Music Hall Loft around the corner, recently named “best performing arts venue” by Yankee Magazine and the recipient of the NH AIA award for design excellence.