THE MAN WHO WAS NEVER KNOCKED DOWN: The Life of Boxer Sean Mannion. 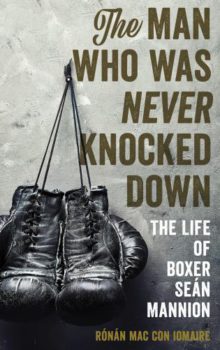 Boxing biographies, like boxers in fiction and film, are usually about champions, those who reached the craggy peak of success, a title. This book is about a contender, who missed being champion, by not that much. In the 1980s, although Sean Mannion was a top contender, with many great fights, he never wore the gaudy belts of the WBA or the WBC, arbiters of the sport. For fellow Irishman Ronan Mac Con Iomaire, his biographer, Mannion deserves a second chance for the public to respect the fighter he was, and honor the man he is. The man who was never knocked down is still standing.

Iomaire has already helped produce a documentary about Mannion. In 2017, his “Rocky Ros Muc” was well received by Irish film critics. Mannion’s story begins in the village of Ros Muc in Connemara, western Ireland. Its most notable inhabitants, including Mannion, had to leave to find fame and success. Ireland’s people, it has been said, is its greatest export. The mother of the current mayor of Boston came from the village.

When Sean Mannion climbed through the ropes for every fight, the label on his trunks read “Rosmuc,” for his village of 500. Mannion was once offered thousands of dollars to change the “Rosmuc” to the name of a business or a product, but he refused. He wouldn’t do it for a million, he said. “Rocky Ros Muc” is a reference to the Rocky of the most popular boxing story on film. That Rocky was a thick tongued, Phillie native, who punches his way to glory against all the odds, from lower class to sports aristocracy. The 20 foot square of the ring has its own truth to tell in the sweat and blood of opponents. Pedigree, privilege, and position don’t count a whit once the bell is rung and the fight is on. At its best, the ring is a meritocracy.

In reality, as Iomaire explains, boxing is a big business, where few are fortunate – Sugar Ray Leonard was the first to make $100 million in the sport – and most of the rest, like Mannion, barely make a living. Managers, those who direct the talent and careers of the boxer, make a major difference, the choice of manager a mix of opportunity and luck. Mannion’s best manager, the legendary Angelo Dundee, appreciated his boxers and called each “my guy.” For Dundee, boxers, their well-being, came first. His job was to enhance their physical and psychological health to make them champions.

Dundee finished his career with 15 champions. He considered Mannion as one of his most talented boxers. Dundee noted how tough Mannion was. It was he who remarked that Sean had never been knocked down, the title of Iomaire’s biography. Mannion could take a punch and distribute its force, roll with it, to lessen its impact. Mannion was a natural fighter, and often sparred out of his weight class. Dundee’s regret is that he didn’t manage Mannion when he was 20, instead of 30, nearing retirement.

Iomaire has a convincing example of the other kind of management, where the boxer’s interests do not come first. In the early 1980s, a fight between the highly ranked Tommy Hearns and the unknown Sean Mannion was proposed. Aside from more money, success or even a good showing in the matchup would have elevated Mannion’s career and prospects. NBC commentator Dr. Ferdie Pacheco vetoed the fight because of Mannion’s manager then, Jimmy Connolly.

In June 1981, Connolly had committed Mannion to fight Davey “Boy” Green in London, but Mannion remained stateside for a wedding. Connolly was on the hook for a fighter against Green. He put in Danny Long after Long, just coming off a hard loss against Alex Ramos, had only 10 days of rest. Against Green, Long was beaten in four rounds, and his face, according to Iomaire, looked like someone had taken a baseball bat to it.

Pacheco was furious. Allowing Long only 10 days of rest was abuse, an example of what’s wrong with boxing. To the newspapers, he complained that’s how boxers got killed. Pacheco wouldn’t  allow any fighter managed by Connolly to be on NBC, not because of the boxers, but their manager. So the bout between Mannion and Hearns didn’t happen.  (Pacheco also told Muhammed Ali to retire when Ali’s reflexes slowed, but the champ ignored the advice.)

Mannion continued his rise in the ranks until he got his chance to fight for the light middleweight crown. On October 19, 1984, in perhaps the most meaningful contest in his career, he went 15 rounds against one of the best of his class, Mike McCallum, whom Tommy Hearns reportedly feared and avoided fighting. A veteran of over 250 fights, a natural warrior like Mannion, McCallum would be his toughest opponent. Mannion, however, was fearless. 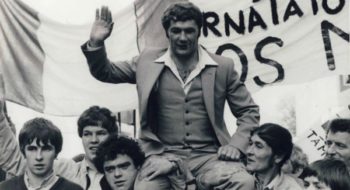 Fortune did not smile on the Irishman. Five weeks before the fight, Mannion’s eye was cut by an errant elbow during sparring. The stitches made it impossible for him to spar. The wound had to heal. Mannion trained, hit the bags and pads, and ran the miles, but he lost the sharpness gained through sparring. In the fight, McCallum’s punches reopened the cut and shut Mannion’s right eye. Although he was lucky to last through the 15th , Mannion lost the decision. McCallum went on to defend his title many times after, but never faced Mannion again, his toughest opponent.

The fight at Madison Square Garden, as Iomaire describes it, explains elements of Mannion’s identity, what made the fighter into who he is. South Station ran extra trains to New York to accommodate all the Boston Irish, on their way to attend the fight. Iomaire estimates that 10,000 of the 20,000 in the arena were Mannion fans.

Like the “Rosmuc” stitched onto his trunks, the Gaelic language of Ireland epitomized Mannion’s roots, and perhaps Ireland’s painful history, the poverty, wars, famines, and oppression. Paddy, Mannion’s brother and cornerman at his fights, used to shout at him in Gaelic to lift Mannion’s spirits and remind him who he was. Mannion feared no man, but he was worried that he would bring shame to Ireland and Ros Muc.

That wasn’t the case. When he returned to Ros Muc after his defeat, he was treated as a hero for representing Ireland in a championship bout. Sean Mannion never became champion in any division. He fought until retiring in 1993 at age 36. He worked construction in Boston to make a living. For a while, he trained boxers, but apparently his gym closed, the interest in boxing waning and the interest in property rising, as poorer sections of Boston gentrified.

Iomaire says little about Mannion’s personal life (we learn late he was divorced, remarried, and has a daughter) or his problem with drinking, perhaps those empty calories one reason he struggled to make his weight class. Readers will be fascinated by the episode when Mannion had to lose nine pounds in a day to make the welterweight requirement, or forfeit the fight. Mannion got through that ordeal, as he did through every challenge in the sport of boxing – except winning the title, champion.