TRINITY REP CELEBRATES THE HOLIDAYS WITH 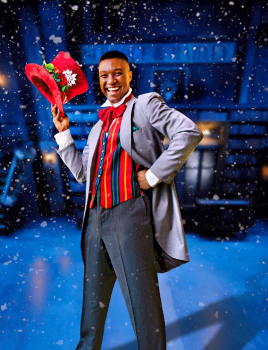 Trinity Rep is proud to present its annual holiday tradition, A Christmas Carol. Noted for being a new production each year, the 2019 production has been inspired by the senses, with a focus on the sights, sounds, and smells of the holiday season. With an abundance of dancing and singing, this year the production will be directed by Kate Bergstrom. Beloved acting company member Jude Sandy will be playing the role of Ebenezer Scrooge. A Christmas Carol runs November 7 through December 29, with press opening on Tuesday, November 12 at 7:30 pm. Among the ten most-attended productions of A Christmas Carol in America each year, Trinity Rep’s production has become a southern New England tradition, serving over 1.6 million people since its inception more than four decades ago. Last year’s production was the highest-selling show in Trinity Rep’s history. More show details are online at TrinityRep.com/carol. Tickets start at $27 and are available online or by contacting the box office at (401) 351-4242.

Trinity Rep will continue offering a Sensory-Friendly Plus! performance of A Christmas Carol , on Saturday, November 16 at 2:00 pm. Designed to meet the needs of children and adults on the autism spectrum, and/or individuals with sensory processing disorders or other cognitive disabilities, this performance features modified sound, lighting, and other adjustments. Patrons are invited to make sounds, enter and exit as needed during the performance, and enjoy this holiday tradition with their family and community.

The Sensory-Friendly Plus! performance features a red warning light that will illuminate before intense sound and light effects, and includes trained ushers in the audience to offer assistance, a social story and plot synopsis sent in advance, and a safe space in the lobby for patrons to return to if they need a break from the performance. More information can be found at TrinityRep.com/sensoryfriendlyplus.

Resident Acting Company member Jude Sandy had to say of his role as Ebenezer Scrooge, “Playing Scrooge at Trinity Rep has been a dream for me ever since I was a Brown/Trinity Rep graduate student. A lot of my prep, apart from consuming every detail I can of the original story, is thinking about how I can honor Dickens and generations of Trinity Rep audiences and the great performances of my fellow acting company members past and present. I hope to wrap myself up in all that glorious history and communal ownership, and aim to reflect all that rich tradition living in our shared present.”

Director Kate Bergstrom said of the production, “Part ghost story, part Odyssey, part party like its 1843, I envision this journey as a livening of the senses. With a full-bodied ensemble-driven world, my hope is to uncover and reveal the transcendental magic of generosity and joy implied in Dickens’ call to A Christmas Carol. Telling this story is a quest for magic. Telling this story is a call for redemption, radical compassion, and hope.”

Founding Artistic Director Adrian Hall first added A Christmas Carol to Trinity Rep’s lineup in 1977, just four years after moving into the company’s current home at the Lederer Theater Center on Washington Street. Since then the production has been a holiday staple for generations of families in Southern New England. Trinity Rep’s production is set apart from other holiday productions by the fact that it is re-imagined every year by a new director, cast, and set of designers.