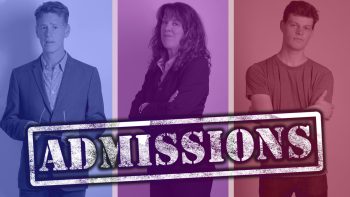 From October 25 to November 30, 2019, SpeakEasy Stage Company will proudly present the New England premiere of ADMISSIONS, the winner of the 2018 Drama Desk Award for Outstanding Play.

From provocative playwright Joshua Harmon, author of Significant Other, Skintight, and Bad Jews, ADMISSIONS is a bold new comedy “of the left, by the left, for the left ̶ for today” (The New York Times). The story centers on Sherri Rosen-Mason and her headmaster husband Bill, who have worked hard for many years to expand the racial diversity of the student body at the small New England prep school where they work. But when their son’s Ivy League dreams are on the line, personal ambition and progressive values collide in this no-holds barred look at privilege, power, and the perils of hypocrisy.

Joshua Harmon’s plays have been produced across the United States at such prestigious regional theaters as Studio Theatre, The Geffen, Actor’s Express, The Magic, and Theater Wit, among others, and internationally in Australia, Canada, Germany, Ireland, Israel, Poland, Russia, South Africa, Sweden, and throughout the U.K. e is a two-time MacDowell fellow, under commission at Manhattan Theatre Club, and an Associate Artist at Roundabout. Mr. Harmon is also a graduate of Juilliard.

SpeakEasy Founder and Producing Artistic Director Paul Daigneault will direct this New England premiere production of ADMISSIONS. Winner of three Elliot Norton Awards including the 2014 Norton Prize for Sustained Excellence, Mr. Daigneault has directed dozens of Boston premieres, including the company’s recent productions of The View Upstairs, The Scottsboro Boys, The Curious Incident of the Dog in the Night-Time, Allegiance, and Fun Home.

ADMISSIONS will run for six weeks, from October 25 through November 30, 2019, in the Roberts Studio Theatre in the Stanford Calderwood Pavilion at the Boston Center for the Arts, 527 Tremont Street in Boston’s South End.

For tickets or more information, the public is invited to call BostonTheatreScene Ticketing Services at 617.933.8600 or visit www.SpeakEasyStage.com.