It’s Been 60 Years Since

Controversy Still Hangs Over The Fight

On October 10, 1949 at the Rhode Island Auditorium in Providence, the up and coming heavyweight prospect Rocky Marciano stepped into the ring with veteran Tiger Ted Lowry. Rocky had won his first 20 fights, 19 by knockout, and was stepping up in class against the cagey and hard hitting Lowry. Ted’s record going into the fight was 63 wins, 49 losses, and 9 draws, but the numbers don’t tell the real story behind what a formidable opponent he was.

Lowry had been fighting since 1942 and had faced many of the best fighters of the time. He had also squared off against champion Joe Louis in an exhibition bout where he more than held his own. He had been stopped only one time in those 121 bouts. He showed no scars on his face, a tribute to his fine defensive skills. His record lists such names as Archie Moore, Lee Oma, Omelio Agramonte, Aaron Wade, and Lee Savold.

This fight would be Rocky’s first big test against a highly skilled fighter who would be able to extend him. The fight was scheduled for ten rounds, and went the full distance.

3,696 fans showed up, the vast majority were there to cheer on Rocky. As the bell rang for the first round it quickly became apparent this was not going to be an easy night for the kid from Brockton. Lowry stung Marciano at the outset with two right hands, and in the second hurt him with a pair of left uppercuts. Lowry held the upper hand in the 4th round as well when it appeared Rocky was close to being stopped.

Things changed in the 5th round when Lowry went into a more defensive posture. Some of the fans started booing as they felt Ted was purposely backing off. Had he been told to back off? Perhaps he was tiring.

At the end of the ten rounds the decision was awarded to Rocky. This did not go over well with the crowd that felt Lowry deserved the win. Of course, when a prospect has been on a roll and has been mowing down every opponent put in front of him, his fans will feel let down when he has a night where he looks less than formidable.

Out of his 49 fights Rocky only had two that could be called at all controversial decisions. This fight with Lowry and his first bout against Roland LaStarza. In the LaStarza fight Marciano decked Roland at the end of the 4th round. Rocky had the 8th taken away from him because of a penalty for hitting low. One judge had LaStarza winning 5 rounds to 4, while the other judge had it for Marciano by the same margin. The referee had the bout even at 5-5 but gave Rocky the nod on points. The press reported the win as paper thin. This wasn’t so much controversial as it was a very close fight that could have gone either way.

In the Lowry fight it is very possible Rocky got the benefit of the doubt in getting the decision, but the controversy was not so much over the scorecards but rather Lowry’s change of tactics in the fight. Even today it is said either the fix was in or Ted was told to back off when he came to his corner after the 4th round.

To the first accusation, that the fight was fixed. This doesn’t hold up at all. If Lowry had agreed to throw the fight why would he have gone after Rocky so hard in those early rounds, almost stopping him in the 4th? He was obviously going for the win, there can be no doubt about that.

The other theory is that after the 4th round his cornermen told him to back off. The reason supposedly being that certain people had spoken to them during the round and told them it would be bad for their health if Ted kept up the his assault. Could this have happened? Well, it is boxing so anything is possible. 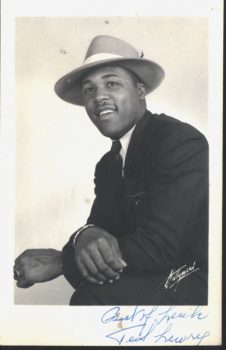 Ted Lowry never ever said this happened. He felt he deserved the decision, and denied he had been told to back off. He told reporters that after the 4th round Rocky had changed his strategy and he only adapted to that change. He still felt that he won two of the last 5 rounds which, coupled with his strong start entitled him to the win. It must also be noted that Marciano came on strong in those later rounds, a trait he would display throughout his career.

Unfortunately, no film of the fight exists. What really happened? If you look at the rest of Rocky’s career, you will see a number of fights where he did not do well in the early rounds. His matches against Jersey Joe Walcott and Archie Moore are two examples. The Moore bout might be the best one to use when trying to figure out what happened in the Lowry fight.

Against Moore, Rocky was decked in the second round by a thunderous right hand. Moore landed heavily on him and appeared to have the upper hand. However, Marciano got stronger as the fight progressed, and by the 9th round had worn Archie down and stopped him.

I believe this fight was on the up and up. It is possible that Lowry deserved the decision, but it was not the Brink’s robbery. What was seen that night was the drive that would lead Rocky to go on to win the heavyweight title.

The two would meet again a year later with Marciano winning a decision. Ted Lowry did not dispute the outcome of the rematch.

It is interesting to note that out of Rocky’s 49 victories, only two could be considered at all close. The win over LaStarza and the first fight with Lowry were close, but in both fights Marciano had a solid claim to victory.

It should also be noted that Ted Lowry was the only man go the distance twice with Rocky, and, with the exception of Ezzard Charles, he fought the most rounds against the Rock. That’s quite the accomplishment.