Jersey Boys!, 42nd Street, Cabaret, and Murder On The Orient Express With More To Follow 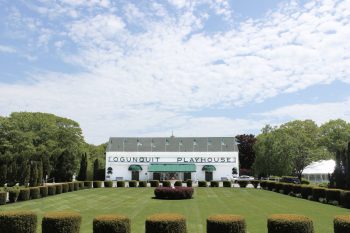 The legendary Ogunquit Playhouse is thrilled to announce a sensational lineup of shows for audiences in 2019. For the first time in over a decade the Playhouse will stage a non-musical play in addition to five musicals, including the return of the multi-Tony Award-winning, international sensation Jersey Boys; the quintessential tap dancing extravaganza 42nd Street; and the iconic and powerful jazz musical Cabaret. The play that will ignite the stage with murder and mystery is the beloved Agatha Christie’s Murder on the Orient Express. Closing out the season is a hilarious musical comedy that will be announced soon and a Tony Award-winning, smash hit musical which will be announced in May.

“As we head into our 87th season, we are delighted to present an exciting lineup of musicals for our audiences,” stated Bradford Kenney, Ogunquit Playhouse Executive Artistic Director. “I am very excited to produce my first play here at the Playhouse. I am a huge Agatha Christie fan and we have carefully chosen one of her most thrilling murder mysteries, a brand new play adapted for the stage by Ken Ludwig. It will be seen here for one of the first times anywhere, live on our stage this summer.”

Season ticket subscription packages are on sale now and the only way to guarantee the best seats for the best price to these exciting shows! Prices start at only $250 for a five-show package and $150 for a three-show package. Gift certificates are also on sale online and through the Box Office. Individual tickets are on sale exclusively for Ogunquit Playhouse members the week of Monday, March 4. Individual public ticket sales begin Monday, March 11 with prices starting at $36.

It’s just too good to be true! The season kicks off with the return of the multi-Tony Award-winning, international sensation that performed to sold-out houses during its run at the Ogunquit Playhouse in 2018, Jersey Boys! The hit show is back by popular demand May 15 through June 15. Returning to the Playhouse stage as The Four Seasons are Jonathan Mousset (Frankie Valli), Matt Magnusson (Tommy DeVito), Andy Christopher (Bob Gaudio), and Matthew Amira (Nick Massi). Follow the incredible story of four guys bound by one dream, who worked their way from the streets of New Jersey to the heights of stardom. Jersey Boys takes audiences on an exhilarating journey with the electrifying performances of the golden greats that took these hometown boys from Jersey all the way to the top of the charts: “Sherry,” “Big Girls Don’t Cry,” “Can’t Take My Eyes Off You,” “Dawn,” “My Eyes Adored You,” and many more. Don’t miss your chance to see this blockbuster show – you’re sure to leave exclaiming, “Oh, What a Night!!”

Come and meet those dancing feet! The ultimate tap-dancing, show-biz musical sensation, 42nd Street celebrates Broadway, Times Square, and the people who make magical musical theatre, on stage June 19 through July 13 and featuring Emmy Award-winner Sally Struthers. The Ogunquit production will be staged by Randy Skinner, the creator of the Broadway revival and recent West End smash hit. Aspiring chorus girl Peggy Sawyer comes to the big city and soon lands her first job in the ensemble of a glitzy new Broadway show. Mayhem and mirth ensue when just before opening night the leading lady breaks her ankle. Will Peggy be able to step in and become a star? The score is chock-full of Broadway standards, including “You’re Getting To Be A Habit With Me,” “Dames,” “We’re In The Money,” “Lullaby of Broadway,” “Shuffle Off To Buffalo” and “Forty-Second Street.” Be sure to shuffle off to Ogunquit for this delightful and dazzling musical!

Decadent nightlife meets dangerous times at Berlin’s alluring Kit Kat Klub in Cabaret, on stage July 17 through August 10. The Ogunquit production is based on the searing Sam Mendez musical recently revived on Broadway and is set in the cabaret underworld on the eve of Hitler’s rise to power. This unforgettable musical tells the story of Cliff Bradshaw, a young American writer newly arrived in Berlin, who falls in love with cabaret singer Sally Bowles. Their romance sizzles amid the back room culture of the cabaret and the tumultuous atmosphere of pre-Nazi Germany. Cabaret is a raw and powerful jazz musical that explores the dark life of Berlin’s natives and expatriates as Germany slowly yields to the emerging Third Reich. The show has had numerous Broadway and London revivals and is the winner of multiple Tony Awards, including Best Musical and Best Original Score for Kander and Ebb’s compelling musical numbers which include, “Willkommen,” “Money,” “Tomorrow Belongs To Me,” “Maybe This Time” and “Cabaret.” Come to the Cabaret, your table’s waiting!

All aboard! The exotic Orient Express is hurtling down the tracks… to a murder! Agatha Christie’s Murder on the Orient Express hits the stage August 14 through August 31 with a train full of suspects and an alibi for each one. It’s the perfect mystery for detective Hercule Poirot, n’est-ce pas? Wax your mustache and hold on to your passport! Newly adapted for the stage from Agatha Christie’s masterpiece by two-time Tony-nominated playwright Ken Ludwig, the beloved mystery unfolds in a fresh and thrilling way. This exciting play will take audiences on a suspenseful, thrilling ride aboard the legendary Orient Express! Don’t go off the rails – hop on board today!