May 31st was the 32nd anniversary of the death of the great Jack Dempsey. On social media people marked the date by showing clips of Jack’s winning the Heavyweight Championship in brutal fashion from Jess Willard. In that bout Dempsey floored the giant Willard seven times in the first round administering one of the most severe beating ever seen in a boxing ring. By the end of the third round Jess was unable to continue having suffered broken bones in his face and ribs. For years it had been rumored that Dempsey’s hands were loaded (something heavy was put into his gloves along with his fists) for the fight. His former manager, with whom Jack had had a falling out, fed the flames by claiming to have taken part in the scheme. His accusations were driven by a desire to hurt his former champion. This controversy has been argued to exhaustion by fight fans over the years with most agreeing the fight was on the up and up, so I will not rehash the arguments here.

“In reality, the boxing glove has made the sport more dangerous.”

What has not been discussed much is the fact that in reality all boxers enter the ring with their gloves loaded, and I don’t mean with just their fists. It is interesting to learn just why the boxing glove and the taping of the hands came into existence, as most people believe it was to make the sport safer. That couldn’t be further from the truth. In reality, the boxing glove has made the sport more dangerous. I will give a very short history of how the boxing glove evolved and I think you will begin to understand what I mean. 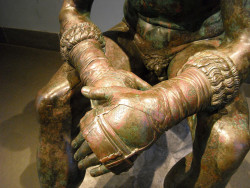 The first version of a boxing glove appeared in ancient Greece. The boxers of that era found they were breaking their hands when hitting each other in the head, so they began wrapping pieces of leather around their fists as a way to give more support to the bones in their hands. The ancient Romans, being the innovators they were when it came to making sports more barbaric, started adding small spikes to the leather hand wraps in order to make them even more deadly. There is an excellent example of this hand wrapping, or what was to become known as the cestus in the remarkable statute of “The Terme Boxer” or as it is more commonly known “The Boxer At Rest” in Rome. I have written about this incredible work of art before and include a photo of it with this article.

I will now skip ahead a couple of millennium to the period in England when boxing started to become very popular. In the 18th Century, James Figg, who has become known as the Father of Boxing, began developing a style of boxing, that while quite different from what we know it as today, set the stage for what would later develop into the modern sport of boxing. Figg incorporated many moves from the art of fencing into a sport that was to become known as boxing. This early version allowed for punching, but that was not the main emphasis. Grappling was also a big part of what went on in these matches. One of the reasons for the lack of punching was the fact that the combatants would break their hands hitting each other on the head. Our hands are made up of many small bones that break and bruise easily. Just ask anyone who has suffered from carpal tunnel syndrome and they will tell you how delicate the human hand can be.

As the sport moved on into the 19th Century, fighters continued to deal with the best way to avoid breaking their hands. In many ways boxing became more primitive as many of the fencing moves were lost and the grappling increased. Many of these later bareknuckle matches would last for hours as neither participant would want to take a chance on throwing a knock out blow until they were sure their opponent had slowed down enough so they could land a clean shot on the jaw, thus not injuring their hand.

Eventually, many of these fighters began wrapping their hands and wearing light gloves in order to allow them the freedom to land more head punches without fear of hurting their hands.

As boxing moved into the 20th Century, hand wrapping became much more sophisticated and the gloves improved quite a bit. At no point were the gloves improved with the idea of making the sport safer. They were further developed in order to allow for more head punching. This actually made the sport much more dangerous, for it was now possible for a large number of punches to be thrown at and landed on the head. This resulted in an increase of head injuries. 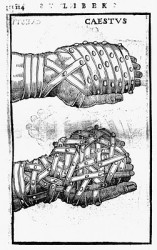 At the beginning of this article I stated that boxing gloves are always loaded. I will explain. If you have ever had your hands properly taped for a fight you will know that first a roll of gauze is wrapped around the hand. This is followed by having the gauzed secured with a goodly amount of tape in order to keep it in place and to greatly strengthen the hand and protect the bones. Once this taping is done, that “loaded hand” is placed into a boxing glove which gives it even more protection. Take a well wrapped hand encased in a boxing glove and you can throw a full throttle blow at a brick wall and not hurt your fist. I have actually done that. Now, just think of how much harder you can hit another human being in the head with this set up.

“The modern boxer does not go into the ring with lead weights in his gloves, but he does enter the ring with a fist that is greatly enhanced for the purpose of causing more damage to the head.”

The modern boxer does not go into the ring with lead weights in his gloves, but he does enter the ring with a fist that is greatly enhanced for the purpose of causing more damage to the head. Dempsey’s hands were not illegally loaded the day he destroyed Willard, but I can guarantee you he would not have been able to land those head punches if his hands had not been wrapped.

The idea that somehow the boxing glove was developed to make the sport safer is a myth. The boxing glove, along with hand wraps, have made boxing more dangerous. An argument can be made that if you wanted to make boxing safer you would ban hand protection.