The Hartford Stage Brushes Up “Kiss Me Kate”
With A Beautiful Production That
Is Pleasing to the Eyes, Ears, and Heart

I last saw a production of the Cole Porter musical “Kiss Me Kate” in 2009 in Boston, and I was very disappointed. I left the theatre thinking that perhaps this wonderful play was too dated to go over today. Well, I was greatly mistaken. In the hands of Artistic Director Darko Tresnjak along with choreographer Peggy Hickey, Kate is alive and well and living on a stage in Hartford.

This is the first musical I have seen at THS and I was impressed. With a sixteen-piece orchestra, yes, a real orchestra led by Kris Kukul, amazing sets and costumes, and a fantastic cast, this production of Porter’s take on The Taming of the Shrew will have you humming Wunderbar as you leave the theatre.

Set in a theatre in Baltimore in the late 1940s, the play revolves around an acting company that is staging Shakespeare’s “Taming of the Shrew”. The actor’s personal problems, which include love, gambling, keeping the production financially solvent, and dealing with the leading actors being a divorced couple who still carry a torch for each other, though they try very hard to hide it, all spill over to their performances of the Bard’s work.

The back stage scenes are very realistic with a multi level rehearsal space and dressing rooms. The center of the stage revolves so we can see the entrances to actor’s quarters as well as the interiors..

As beautiful as these back stage settings are, your eyes are in for an amazing treat when the scenes turn to the staging of “The Taming of the Shrew”. The colors are vivid and absolutely beautiful. The costumes gorgeously detailed. Watching this performance I felt as if I had tuned in to high definition theatre. I don’t think I have ever seen as beautiful a setting in all my years of going to theatre. With the multi level sections now being used as buildings where the actors open doors and pop their heads out, particularly Kate who uses her perch from above to pelt suitors: Just the thing for the woman who proclaims “I Hate Men”.

“While my eyes were drinking in this beauty, my ears were filled with the pleasure of hearing the wonderful songs of Cole Porter”

While my eyes were drinking in this beauty, my ears were filled with the pleasure of hearing the wonderful songs of Cole Porter being performed by singers who knew how to put them over, with choreography that matched perfectly. Of course, it is hard to miss with songs such as “Too Darn Hot”, “Another Op’nin, Another Show”, “So In Love”, and “Brush Up Your Shakespeare”, but this isn’t just a bunch of very good singers belting out a few songs. No, this is a group of actors doing justice to this marvelous play.

Even the statue of Neptune that takes center stage for a good portion of the play gets in on the act in the number, “Tom, Dick, and Harry”. I won’t go into detail, but what would a Shakespeare inspired play be without a touch of the bawdy.

It is too much of a challenge to name all of the actors in this small amount of space, but I can say without reservation that everyone was top shelf.

If you want to brush up your Shakespeare, your Porter, and your musical theatre, get down to Hartford for this one. This is a Kate worthy of a huge kiss. 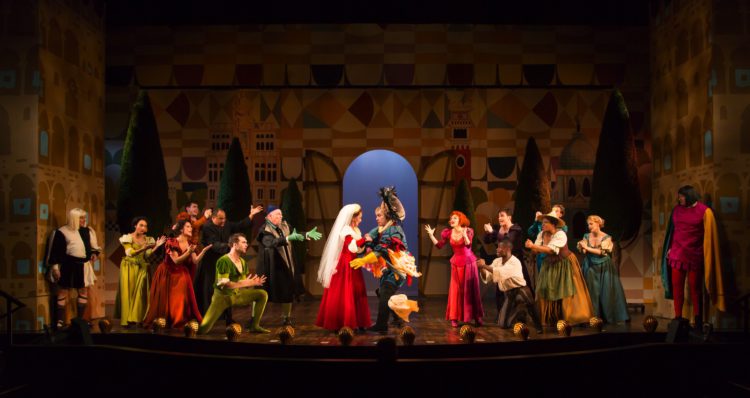 Playing at the Hartford stage through June 14th. Info at www.hartfordstage.org