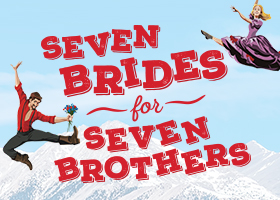 Pull up your boots and hold onto your hats when this all-dancing, all-singing, all-new production of the rip-roarin’ musical comedy classic bursts onto the Ogunquit Playhouse stage September 7 to October 1. Seven Brides for Seven Brothers is a big, brawling, rollicking show filled with rambunctious energy and set in 1850s Oregon Territory with a book by Lawrence Kasha and David Landay, lyrics by Johnny Mercer, music by Gene de Paul, and new songs by Al Kasha and Joel Hirschhorn. This beloved musical based on the glorious MGM hit film and Stephen Vincent Benet’s short story “The Sobbin’ Women” tells the story of Adam Pontipee and his backwoods brothers’ unusual pursuit of brides. When Adam goes to town to get a wife, he miraculously convinces the beautiful and feisty Milly to marry him that same day, and then she immediately starts reforming her six rowdy brothers-in-law. When her plan to marry off the boys backfires, this exuberant rousing musical kicks into high gear with a combination of daredevil dancing and wonderful songs like “Goin’ Courtin,” “Sobbin’ Women,” and “Wonderful, Wonderful Day.”

Broadway performers will headline the Ogunquit production. Starring as Adam Pontipee is Nathaniel Hackmann who is making his Ogunquit Playhouse debut. Mr. Hackmann has appeared on Broadway in Les Miserables, Beauty and the Beast, and Paint Your Wagon. He has also performed in many regional theatres throughout the U.S. in shows that include Oliver!, Sweeney Todd, Oklahoma!,

Camelot and many more. Also making her Ogunquit Playhouse debut is Analisa Leaming who is cast as Milly. Ms. Leaming recently appeared on Broadway in the Lincoln Center production of The King and I and in Roundabout Theatre’s production of On the Twentieth Century starring Kristin Chenoweth. She has performed in regional theatres in shows including Mary Poppins as Mary, The Sound of Music as Maria, The Music Man as Marian Paroo, and many others.

For ticket information visit www.ogunquitplayhouse.org or call the Ogunquit Playhouse Box Office at 207-646-5511.