From Here To Eternity: A New Musical
The Ogunquit Playhouse

James Jones was at Pearl Harbor on December 7, 1941. He had enlisted in the U.S. Army before the war and was stationed in Hawaii in what seemed like a world away from the war raging in Europe that threatened to include the United States. Army life even before the war was not easy. Many of those who enlisted were living very difficult lives in Depression Era America and looked at the Army as being a way out.

Jones wrote about his experiences during this time in the novel From Here to Eternity, which was later made into an Academy Award winning movie. The novel was a no holds barred look at Army life during that period. It was not pretty. The movie shows much, but not all, of what Jones wrote. Now, a musical play with lyrics by Tim Rice, music by Stuart Brayson, and book Donald Rice & Bill Oakes presents us with a work that is much closer to the original novel. It is a painful story but it is told with understanding and sympathy for those involved. All the characters are based on people James Jones knew while serving.

The set at the Ogunquit Playhouse is atmospheric. With large palm trees and multiple levels with lattice work that reaches to the ceiling the beauty of Hawaii is felt but with a dark overtone. Subtle set changes along with images being projected on the walls are used to set the different moods and they are used well.

The score is outstanding and hits hard and fast with the opening number G Company Blues. The choreography is tight and very physical, conveying the hard life these men lived. Other songs such as Thirty Year Man, Don’cha Like Hawaii, and I Love The Army. Something In Return is an amazing number that was superbly done. It allows us to experience the hope and despair of those stationed on the island as well as the women who share this difficult life. These women include prostitutes and the wife of an ambitious and cruel officer.

Those familiar wth the book and/or movie will quickly recognize most of the characters. If not, they will quickly become known to you. The outstanding cast plays each as their own, and with their solid acting and beautiful voices make this a very powerful work indeed. 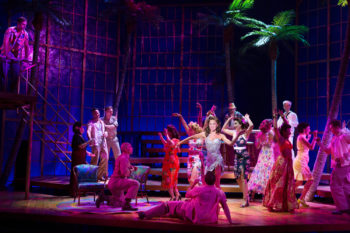 The story of cruelty and the misuse of power hardly seems the material for a musical but it works and works well here. With an outstanding cast led by Derek Carley as Private Prewitt and Kevin Aichele in the role of Sargent Warden the pain and struggles of these individuals is brought to life in a way that is both painful to watch but done with tenderness and compassion.

Robyn Hurder plays Karen Holmes the abused wife of the ambitious but weak Captain Dana Holmes played by Bradley Dean. They make the ugliness of such a marriage almost too real, but it is necessary. We do get to see the tender side of Karen in her scenes with Sargent Warden with whom she is having an affair. And for those who might be wondering how the famous beach scene from the movie is recreated, I will just say this is not a staging of the movie; however, the emotions from that iconic movie movement are captured here.

The wise cracking Private Angelo Maggio has been cast perfectly with Michael Tocconi in the role. His rendition of I Love The Army is heart wrenching. Reed Campbell returns to the Ogunquit stage after his outstanding performance in Bullets Over Broadway, and proves that he was no one shot wonder. He again shows his amazing talent as the sadistic Sargent Fatso Judson. By the time Judson gets what is coming to him there is nobody in the house who feels sympathy for him.

Jenna Nicole Schoen plays the prostitute Lorene that Private Prewitt falls for. She has a beautiful voice and is wonderful in her part. Ms Schoen captures in her character a loving woman who has had to turn her feelings off in order to survive in a hard world. Private Prewitt manages to break through the wall she has put up. Jodi Kimura as Sandra, the madame of the local brothel, conveys the combination of a jaded life along with
compassion and understanding.

The finale with the attack on Pearl Harbor is spectacular with slow motion sequences from the actors as well as magnificent use of the projection equipment that brings the audience into that infamous day. It also shows us how life has been transformed by world events and the tragic consequences of people who wield their power, no matter how small, over others with cruelty that result in such horrific consequences. The song The Boys of 41 which is reprised at the end of the play is poignant and moving as we see the names of those who gave their lives projected onto the walls of the theatre.

I do have to mention the amazing job Richard Latta has done with the lighting for this production. The subtle changes are so very effective in setting the mood for the different scenes.

From Here To Eternity at the Ogunquit Playhouse is truly an experience not to be missed. Artistic Director Brad Kenney has closed out the Playhouse’s 85th season in spectacular fashion.

Just a final note. This is not a play that would be appropriate for children. It does handle the serous themes in a tasteful way but I believe it could be disturbing for children.

From Here To Eternity: A New Musical
The Ogunquit Playhouse
Ogunquit, Maine
Through October 29
ogunquitplayhouse.org
207.646.5511