Will We Ever Know What Really Happened?

On February 25, 1964 the young upstart Cassius Clay stepped into the ring in Miami Beach, Florida to take on Sonny Liston for the Heavyweight Championship of the World. The fight took place just three months after the assassination of President John F. Kennedy and, like the Kennedy assassination, it has sparked many theories about what really happened.

Clay went into the fight undefeated but as a 7 to 1 underdog which was no surprise, Liston had won the title with a devastating knock out of Floyd Patterson and just a year later he had repeated the victory in the same manner.

In Clay’s two previous fights leading up to the title shot he had won a very close decision over Doug Jones and stopped Henry Cooper on cuts. In the Cooper fight Clay was dropped by a left hook thrown by Henry and if the bell had not rung just as he got up may have been kayoed. Neither of these two opponents would have ever been confused with Sonny Liston.

There were some sportswriters who not only didn’t give Cassius a chance, they feared he could be killed by Sonny. But then the unthinkable happened; Cassius Clay “Shook up the world” when Liston quit while sitting on his stool after the 6th round. This was stunnung, and immediately the cries of the fight being fixed rang out.

How on Earth could this loudmouth 22 year kid have made the unbeatable Sonny Liston give up the title by quitting? You have to remember, Liston was not only the Heavyweight Champion but also the scariest and meanest man on the planet. His awesome power and baleful stare sent chills down the spines of not only his opponents but of almost anyone who was in his presence. To the public in1964 this outcome just didn’t make sense.

Why would Sonny Liston quit and give up the most valuable prize in all of sports? Nobody could know for sure and Sonny wasn’t talking other than to say he hurt his shoulder.

One theory has it that Liston had bet a huge amount of money on himself and had planned to lose a fifteen round decision to Clay, but when it appeared Clay was going to quit after the fifth round Liston figured he had better hang it up first or he was going to lose his bet. Liston also knew there was a clause calling for a rematch in the event he lost.

It seems unlikely Liston could have wagered enough money on himself that it would have benefited him more than having the heavyweight title. Perhaps the mob had gotten to him and pressured him to quit. That’s possible too, but it doesn’t explain one thing, the reason Clay wanted to quit.

After the 4th round Cassius came back to his corner and complained to his trainer Angelo Dundee that he had something in his eyes that was burning and he couldn’t see. He told Angelo to cut off the gloves. Dundee washed his eyes out and pushed Clay out for the 5th round. Clay, still not able to see, got on his bicycle and danced around the ring keeping his distance from Sonny. Sonny couldn’t or wouldn’t lay a glove on him. Cassius survived the round and in the fifth he was back on track and was hitting Sonny with beautiful left jabs that were causing Liston’s face to swell. 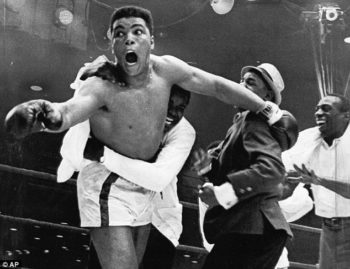 The fact that Sonny’s corner may have put a substance on the champion’s gloves should dispel the theory that Liston went into the fight planning to lose. I recently spoke to boxing historian Mike Silver about this. Mike has written a very good article about the controversy over the gloves entitled “Foul Play In Philly” where he compares what happened in Miami in 1964 to a similar situation that occurred when Rocky Marciano was fighting Jersey Joe Walcott for the title. Marciano was also blinded for a number of rounds during that fight. Rocky was always convinced Walcott’s cornermen had put a substance on his gloves. It is also believed the same thing happened when Liston fought Eddie Machen. It is called juicing the gloves. 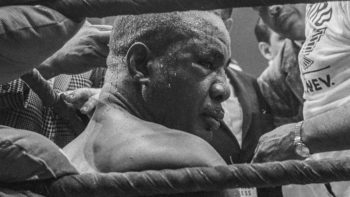 I told Mike his article proves once and for all Liston did not throw throw the fight. “Not necessarily” Mike responded, “What if the people in Liston’s corner didn’t know Sonny was throwing the fight?” This would be the “Lone Gunman Theory”. Liston could have made a deal on his own with the mob, and the less people who know about such a deal, the less likely it would be found out. Knowing Sonny’s background this is very plausible.

Another camp posits that Liston quit because he had been threatened by the Black Muslims and he feared he would be shot if he won. This one could be listed as the “Grassy Knoll Theory” where a gunman is hiding somewhere in the crowd waiting to assassinate Sonny if things don’t turn out as planned. Again, given Sonny’s background dealing with mobsters, this also is somewhat believable.

So, what do I think happened? I used to believe the theory that Liston was going to planning on losing a 15 decision to Clay but then quit when he thought Cassius was going to. I no longer agree with that. The way the fight was going I doubt Liston would have made it the full fifteen rounds. He was tiring and the swelling under his left eye was getting worse. Liston had only a total of less than six rounds of action in the ring since 1961 and only less then two rounds since 1962. He was also confident he could easily beat Clay so he did not train hard for the fight. Meanwhile, Cassius Clay was in superb shape and he had been very active. He had 17 fights since 1961 and a total of 91 rounds of action. Quite a difference.

Clay was also pumped for this fight while Liston wasn’t. Clay’s confidence, or possibly fear, put all of his defensive mechanisms on high alert. His adrenalin was flowing and that made his already amazing reflexes all that much sharper. Put this all together and the outcome does not seem as implausible as many believed. Sonny was ripe for the taking that night and Clay had the tools to do it.

I’ll save the Magic Bullet Theory for when I write about the rematch.

Word has reached us that Doug Jones, the former light heavyweight and heavyweight contender of the early 1960s, passed away recently at the age of 80. Prior to Muhammad Ali’s three and a half year exile that began in 1967 Doug Jones gave the fighter then known as Cassius Clay his toughest fight. On March 13, 1963, before a sold out Madison Square Garden crowd of 18,732 fans, Clay struggled to win a close but controversial 10 round decision over his persistent foe.

Opinion was split as to who deserved to win. Many fans in the Garden and those watching the bout at 40 closed circuit locations thought Jones had done enough to edge Clay who chalked up his 18th straight victory. Doug’s record fell to 21-3-1. (Eleven months and two fights later Cassius would upset Sonny Liston to win the heavyweight title).

Interviewed 20 years later the defeat still rankled Jones. “Clay ran like a thief”, he said. “I carried the fight to him. Suppose I went the other way, what kind of fight would it have been? Clay didn’t hit me with any solid punches. There wasn’t any real power in his punches.”

Few boxers at his weight have engaged in so many tough fights against top competition in so short a time as Doug Jones. He was a talented boxer with a powerful right hand but what separated him from the crowd was his incredible toughness and heart. Doug had an extensive and successful amateur career during military service in the Air Force. (He was alternate light heavy for the 1956 U.S. Olympic team).

Doug turned pro in 1958 with a four round decision over Jimmy McNair. He was rushed much too quickly yet managed to survive and attain contender status in spite of Madison Square Garden matchmaker Teddy Brenner’s tendency to destroy up and coming talent through horrible matchmaking. Doug only had 10 pro fights when he fought his first main event against tough former New York Golden Gloves champ Juan Pomare. After two more victories he took on hard punching Philadelphia prospect Von Clay in back to back10 rounders. His next outing was a nationally televised bout against former middleweight champion Bobo Olsen. Doug ended matters with a left right combination in the 6th round. He followed up with knockouts of Floyd McCoy and Pete Rademacher before taking on Von Clay for the third and final time winning via a 10th round TKO.

Up next was top heavyweight contender Eddie Machen. Doug lost the decision and five months later faced Harold Johnson for the undisputed light heavyweight title. Doug never stopped trying but with only 20 pro bouts under his belt he was just too inexperienced to take the measure of the great boxer and lost a unanimous 15 round decision. On October 20, 1962 Doug was matched with a 9 bout pro named Bob Foster. He stopped the future light heavyweight champion in the 8th round. (Previously Doug had defeated Bob twice in the amateurs while both were in the Air Force).

Although he rarely weighed more than 190 pounds the rest of Doug’s career was spent fighting heavyweights. A dramatic 7th round KO of top ranked Zora Folley (a few months earlier he dropped a decision to Folley) moved Jones into the ranks of heavyweight contenders and led to his match with young Cassius. Doug’s manager Alex Koskowitz and his trainer Rollie Hackmer decided the best strategy was for Doug to slip past Clay’s jab while constantly pressuring him, upset his rhythm, and land the right.

Jones at 188 pounds and 6 feet tall was 14 pounds lighter and three inches shorter but was significantly faster than Clay’s previous opponents. In the first round Clay was sent back on his heels by Jones’s right cross. He was tagged solidly again in the 4th and 7th rounds. Clay responded with swift combinations and it was anybody’s fight going into the ninth round. Clay turned it on in the final round landing frequently with combinations to seal his victory.

After splitting two fights with Billy Daniels, Doug’s tenure as a heavyweight contender ended with an 11th round TKO loss to George Chuvalo on October 2nd 1964. During the fight Chuvalo centered his attack on Doug’s body and many punches strayed into foul territory. As a result of the punishment Doug suffered a hernia and was out of action for close to a year. His last chance for a title ended with a 15 round loss to WBA heavyweight champion Ernie Terrell on June 28, 1966. By the time up and coming Joe Frazier knocked him out in the 6th round on February 21, 1967 Doug was pretty much used up and punched out. If he needed any more convincing to retire it was provided six months later by young Boone Kirkman who TKO’d him in six. The Harlemite ended his career with a 30-10-1 (20 KOs) record. He appeared in 11 nationally televised bouts.

Doug was an unlucky fighter. He came along at the wrong time when Harold Johnson was light heavy champ. If not for that Doug was a good bet to have won that title but he chose to go for the big money and take on heavyweights. Never an easy opponent at any time during his nine year pro career, he would be a terror among the light heavyweights of today. They did not come any tougher than Doug Jones.

Mike Silver is the author of The Arc of Boxing: The Rise and Decline of the Sweet Science (McFarland Publishers) and Stars in the Ring: Jewish Champions in the Golden Age of Boxing, A Photographic History (Lyons Press).