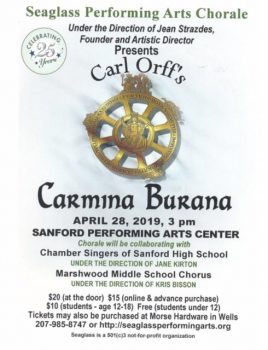 Seaglass Performing Arts Chorale, conducted by Artistic Director and Founder JeanStrazdes, will be performing Carl Orff’s Carmina Burana at the new Sanford Performing Arts Center at Sanford High School, Sanford, Maine at 3:00 pm on April 28, 2019. The performance will be one of the premiere concerts at the new center and is in celebration of Seaglass Performing Arts’ 25th anniversary performance year. The Chorale will be collaborating with the Chamber Singers of Sanford High School under the direction of Jane Kirton and the Marshwood Middle School Chorus under the direction of Kris Bisson.

Seaglass Chorale is proud to present Carl Orff’s masterwork, Carmina Burana, featuring soprano Sierra Marcy, baritone Will Prapestis, and a children’s choir from Sanford Middle School. Carmina Burana is a scenic cantata composed by Carl Orff in 1935 and 1936, based on 24 poems from the medieval collection of the same name. The first and last movements of the piece are called “Fortuna Imperatrix Mundi” (“Fortune, Empress of the World”) and start with the very well known “O Fortuna”. Carmina Burana was first staged in Frankfurt, Germany, by the Frankfurt Opera on June 8, 1937, to wide acclaim. Since then, no other Orff composition has approached the renown of Carmina Burana, as evidenced in both pop culture’s appropriation of “O Fortuna” and the classical world’s persistent programming and recording of the work. In the United States, Carmina Burana remains intensely popular.

Tickets for this single performance of Carmina Burana are $20 (at the door); $15 (online and advance purchase); $10 (students 12 to 18); free for students under 12. Tickets can be purchased online at seaglassperformingarts.org, from any chorale member and are also available at Morse Hardware on Route 1 in Wells.

Seaglass is a 501(c)3 not-for-profit organization.