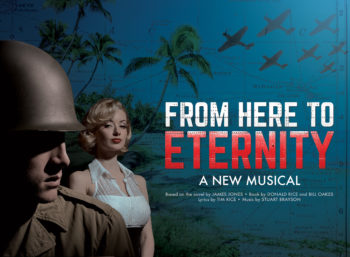 The Ogunquit Playhouse is honored to be part of the North American rollout of the new musical From Here to Eternity, on stage October 4 through 29. The musical is based on the acclaimed novel (which also became a multi-Academy Award-winning film), by James Jones with lyrics by Tim Rice, book by Donald Rice and Bill Oakes and music by Stuart Brayson. As part of its development path to Broadway, Sir Tim Rice is collaborating with the Ogunquit creative team to mount this compelling new musical set in Hawaii in the weeks before the 1941 attack on Pearl Harbor. “The epic story by WWII veteran James Jones, From Here to Eternity, is one of the most searing, honest and romantic views of the men and women who served our country during World War II. The way in which this story had to be told more than 60 years ago due to censorship, softened some of the reality of military life at that time. Today, we are able to tell the story as it was originally intended, revealing the grit and intrigue of military life that Mr. Jones experienced. It has been a great honor to collaborate with Sir Tim Rice, Donald Rice, Brett Smock and our entire creative team on this new musical adaptation to tell this iconic American story in a new way,” said Ogunquit Playhouse Executive Artistic Director Bradford Kenney.
This epic tale follows the powerful story of two U.S soldiers, the soulful Private Prewitt played by Derek Carley and ardent Sergeant Warden, played by Kevin Aichele, as they embark on doomed and dangerous love affairs with the wrong women. The sultry wife of G Company’s commanding officer, Karen Holmes, is played by Robyn Hurder, and Lorene, the beautiful escort who is looking to make a better life for herself, is played by Jenna Nicole Schoen. As the infamous date of December 7th approaches, the claustrophobic world of the four lovers and the desperation of the soldiers of G Company splinter amidst an escalating war. The compelling story of men at war along with a fantastic new score is not to be missed.
Returning to the Ogunquit Playhouse is Bradley Dean as Captain Dana Holmes, commanding officer of G Company. Mr. Dean last appeared in 2016’s The Hunchback of Notre Dame as Frollo, for which he was nominated for an Independent Reviewers of New England (IRNE) Award for Best Actor in a Musical. On Broadway he has starred in numerous productions including Dear Evan Hansen, A Little Night Music, The Last Ship, Doctor Zhivago, Monty Python’s Spamalot, The Story of My Life, Evita, and Man of La Mancha.

Kevin Aichele (First Sergeant Milton Warden) most recently portrayed Warden in the Finger Lakes Musical Theatre Festival production of From Here to Eternity. Some of his selected credits include, Sam in Mamma Mia!, Captain Von Trapp in Sound of Music, and Javert in Les Miserables. Derek Carley (Private Robert E. Lee Prewitt) regional credits include Ghost, Daddy Long Legs, Titanic, Big, and Gay Bride of Frankenstein, and he was in the first National Tour of Flashdance. Robyn Hurder (Karen Holmes) returns to the Ogunquit Playhouse after previously starring as Norma Cassidy in 2015’s Victor/Victoria. On Broadway she has performed in Nice Work if You Can Get It, Grease, Chicago, Wedding Singer, and Chitty Chitty Bang Bang. Ms. Hurder starred in NYCC Encores! productions of The New Yorkers, and Paint Your Wagon, as well as Off-Broadway in Play It Cool. She was in the National Tours of A Chorus Line, Monty Python’s Spamalot, and Starlight Express. Jenna Nicole Schoen (Lorene) recently appeared in the National Tour of Jersey Boys. Her regional theatre credits include CATS and Monty Python’s Spamalot at Pittsburgh CLO, Theory of Relativity at Goodspeed Opera House, and La Cage Aux Folles at Theatre By The Sea. Michael Tacconi (Private Angelo Maggio) is reprising his role from the Finger Lakes production of From Here to Eternity, and recently portrayed Nick in New World Stage’s Bare. Mr. Tacconi has also appeared on television on ABC’s The Family, and LMN’s I Love You…But I Lied. Reed Campbell returns to the Ogunquit Playhouse as Sergeant James Judson. He was seen earlier this season in his critically acclaimed performance as the hit-man “Cheech” in Bullets Over Broadway. Mr. Campbell was Cookie McGee in the National Tour of Nice Work If You Can Get It, and performed off-Broadway in Important Hats Of The Twentieth Century at the Manhattan Theatre Club, in The Comedy Of Errors at The Public Theater’s Shakespeare in the Park, and regionally as Judas Iscariot in Stage 773’s The Last Days Of Judas Iscariot.
www.ogunquitplayhouse.org 207-646-5511.