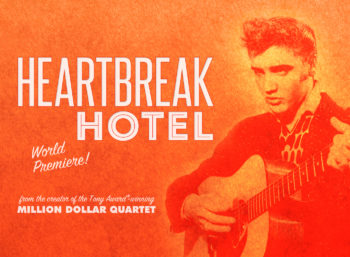 From the creator of Tony Award-winning musical Million Dollar Quartet, the Ogunquit Playhouse is proud to produce the World Premiere of Heartbreak Hotel, as part of its 85th anniversary season, on stage August 30 to September 30. This brand new musical tells the story of Elvis Presley’s journey from an unknown musician to the cusp of his super-stardom. This new musical features hit songs from the King himself, as well as the legends who influenced his iconic music, with chart-toppers including “Blue Suede Shoes,” “Tutti Frutti,” “That’s All Right,” “Shake Rattle and Roll,” and, of course, “Heartbreak Hotel.”

Executive Artistic Director Bradford T. Kenney stated, “Throughout this year I have had the privilege of working very closely with Floyd Mutrux, the creator of the Tony Award-winning musical Million Dollar Quartet on its prequel, Heartbreak Hotel, now making its premiere on our stage. It has been an incredible journey working hand in hand with Floyd, the commercial partners, and Authentic Brands Group/Elvis Presley Enterprises, to bring the rich story and music of Elvis to life. Elvis became one of the great icons of our popular culture. He made a lasting imprint on our society, and his career changed the course of popular music, not only in our country, but around the world – all during a time of great change in America. I am thrilled that Ogunquit audiences will be the first to see this exciting new show.”

This brand new tribute to the “King of Rock ‘n’ Roll” features actors who also play all their own instruments. It stars Eddie Clendening in the role of Elvis Presley, as well as Co-Musical Director. Mr. Clendening originated the role of Elvis in the Broadway production of Million Dollar Quartet, which he played for 1500 performances, and later Off-Broadway for 523 performances. He will recreate the role for this tender story that follows Elvis Presley in the early years of his bourgeoning career as he and Sam Phillips create the music that will forever change their lives. As Elvis’ career skyrockets, both lifting and shattering the lives of those he loves, a secret love story is revealed, a betrayal is discovered, and “Colonel” Tom Parker changes the course of history. When describing the show, Writer/Director Floyd Mutrux explained, “This is the story of 18 months of the life of a truck driver, and how he and his music impacted the world around him.”  Jerry Kernion makes his debut at the Ogunquit Playhouse as Col. Tom Parker, Elvis Presley’s long-time manager. Mr. Kernion has performed around the world with The Reduced Shakespeare Company for the last 15 years; many regional and international productions including Cirque du Soliels’ The Beatles, LOVE, Cirque du Soliels’ Banana Shpeel; and various shows at regional theatres including Laguna Playhouse, Merrimack Repertory Theatre, San Diego Repertory Theatre, and many more.

Joining the cast as Sam Phillips, the record producer who founded Sun Records and is credited with discovering Elvis Presley, is Matt McKenzie. He recently debuted on Broadway in Monday After the Miracle with Jane Alexander, directed by Arthur Penn. He’s played leading roles at many regional theatres across the country. In the Academy Award-winning film Gods and Monsters, he played Colin Clive opposite Sir Ian McKellan.

Also returning to the Ogunquit Playhouse is Christopher Sutton who will portray Dewey Phillips, one of Rock ‘n’ Roll’s early disc jockeys. He was last seen on the Ogunquit stage as Prince Herbert in Spamalot.

Los Angeles music scene veteran Geno Henderson serves as Co-Music Director and also appears as B.B. King, Ike Turner and Chuck Berry in this production. Mr. Henderson is a guitarist, vocalist and songwriter, who has toured, recorded and/or made television with: The Gap Band (featuring Charlie Wilson), The Pointer Sisters, Billy Preston, Roberta Flack, James Ingram and Patti Austin (at Carnagie Hall), Smokey Robinson, Sly Stone, and many others. In 2011, he made his Broadway debut originating the role of Jocko Henderson in the musical Baby It’s You.

Bassist Nathan Yates Douglass returns to the Ogunquit Playhouse as Bill Black, one of the pioneers of Rock ‘n’ Roll music and bassist in Elvis Presley’s trio in the early days of his career. He was last seen on the Ogunquit stage in the 2016 production of Seven Brides for Seven Brothers and Million Dollar Quartet. His National Tour credits include The Buddy Holly Story and The Tammy Wynette Story, and Off-Broadway On the Bum.

Drummer Jamie Pittle will perform as DJ Fontana, a drummer for the Louisiana Hayride radio broadcasts and Elvis Presley’s drummer for fifteen years. Mr. Pittle appeared Off-Broadway in the US Premiere of Missed Connections and Requiem for a Lost Girl. In regional theatres he has appeared in Million Dollar Quartet as Fluke, and The Buddy Holly Story as Jerry Allison. Guitarist Matt Codina will make his acting debut in Heartbreak Hotel as Scotty Moore, the guitarist and recording engineer who was known for backing Elvis Presley in the first part of his career, up to the beginning of Elvis’s Hollywood years.

Brenna Bloom portrays Marion and the queen of Rockabilly, Wanda Jackson. She has performed Off-Broadway in One Day and in regional theatres in such productions as Spring Awakening, Chicago, Grease and A Chorus Line. Erin Burniston plays Elvis’ girlfriend Dixie Lock. She recently performed in the National Tour of Spring Awakening and in regional theatre productions of Gypsy, La Cage Aux Folles, Hello, Dolly!, George M!, Seven Brides for Seven Brothers and many more.