New Version Of The Hit Musical Opens May 16 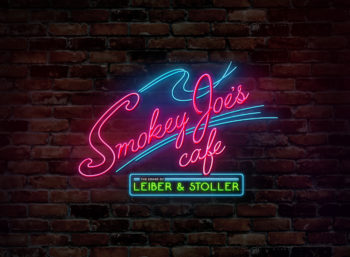 sizzling song and dance celebration Smokey Joe’s Cafe: The Songs of Leiber and Stoller on stage May 16 to June 9. This exuberant production of the record breaking Broadway smash hit is directed and choreographed by Emmy Award-winner and Tony Award-nominee Josh Bergasse who will bring new life to more than 30 classic songs including “Stand by Me,” “I’m a Woman,” “Hound Dog,” “Fools Fall In Love,” “On Broadway,” “Yakety Yak,” “Pearl’s a Singer,” “Treat Me Nice,” “There Goes My Baby,” “Love Potion #9,” “Jailhouse Rock,” and “Spanish Harlem.” The all-new production heads to Stage 42 (422 West 42nd Street, NYC) following its Ogunquit run.

“We are thrilled to be partnering with the original producing team to create this fantastic show,” stated Executive Artistic Director, Bradford Kenney. “It has been our honor to work with Jack Viertel who conceived Smokey Joe’s Cafe with Stephen Helper and the New York producers, Richard Frankel, Tom Viertel, Steven Baruch, and Marc Routh, who have made this collaboration possible. It has also been our honor to bring this incredible creative team to Ogunquit led by Director/Choreographer Josh Bergasse and Tony Award-winning designers Beowulf Borwitt and Jeff Croiter as well as Costume Designer Alejo Vietti and Sound Designer Peter Fitzgerald.”

The original production of Smokey Joe’s Cafe: The Songs of Leiber and Stoller made history as Broadway’s longest running musical revue, earned a Grammy Award and multiple Tony Award nominations. The show celebrates the best songs of the legendary songwriting duo, Jerry Leiber and Mike Stoller and their generation-defining songs that climbed the Billboard charts and provided hit after hit for icons like Elvis Presley, Ben E. King, The Coasters, and The Drifters.

The cast of this all-new production features Broadway and Off-Broadway veterans including, Dwayne Cooper, who appeared on Broadway in Motown and Hairspray, and the National Tours of Smokey Joe’s Cafe, Showboat, and Seussical The Musical; Emma Degerstedt who was most recently seen in the lead role in the Off-Broadway musical, Desperate Measures; John Edwards, whose credits include the Broadway production and National Tour of Jersey Boys, In the Heights at The Kennedy Center and the National Tour of Hairspray; Dionne D. Figgins, who began her career as a member of Dance Theatre of Harlem, and has been seen on Broadway in Hot Feet, Memphis, Leap of Faith, and Motown. Also joining the cast are Nicole Vanessa Ortiz, who made her theatre debut as the leading lady in the Off-Broadway parody, Spamilton; Kyle Taylor Parker, who was most recently seen on NBC’s “Jesus Christ Superstar Live in Concert,” and the original Broadway productions of Kinky Boots and Charlie and the Chocolate Factory; Jelani Remy, who most recently starred as “Simba” in Broadway’s The Lion King; Max Sangerman, who starred in the first National tour of The Lightning Thief, as well as Blue Man Group Off-Broadway; and Alysha Umphress, who performed on Broadway in On the Town, American Idiot, and Priscilla: Queen of the Desert, among others.