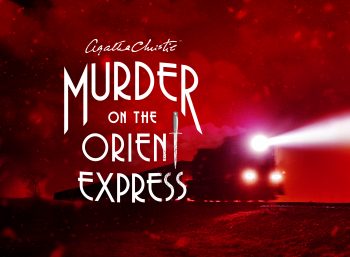 All aboard! Ogunquit Playhouse is thrilled to announce the first non-musical production at the theatre in over 12 years, Agatha Christie’s Murder on the Orient Express, on stage August 14 through August 31. This suspenseful play takes audiences on a delightful journey alongside a train full of suspects, each one with an alibi! There are twists and turns aplenty in this intrigue-filled story, newly adapted for the stage from Agatha Christie’s masterpiece by two-time Tony-nominated playwright Ken Ludwig. This beloved mystery unfolds in a fresh new way that takes audiences on a thrilling ride, and is complete with a professional New York and Broadway-based cast including Tony-nominee Anita Gillette as Princess Dragomiroff and Steven Rattazzi as the mustachioed sleuth, Hercule Poirot. This lavish production is directed by Shaun Kerrison and includes an original set designed by Tony Award-winner Beowulf Boritt and stunning costumes designed by Tony Award-winner William Ivey Long.

“I am very excited to produce my first play here at the Ogunquit Playhouse. I am a huge Agatha Christie fan and we have carefully chosen one of her most thrilling murder mysteries that has been newly adapted for the stage by Ken Ludwig. It will be seen in Ogunquit for one of the first times anywhere, live on our stage. We are delighted to share this new play with our audiences,” stated Bradford Kenney, Ogunquit Playhouse Executive Artistic Director.

Steven Rattazzi leads the cast as Agatha Christie’s beloved character, Belgian detective Hercule Poirot. He has performed in Indecent on Broadway, and Off-Broadway in numerous productions including Henry V with Liev Schrieber, The Black Crook, Galileo, The Tempest with Mandy Patinkin, Stunning, Dinner Party, Painted Snake on a Painted Chair, and McGurk. In regional theatres his credits include Ken Ludwig’s Sherwood, Indecent, Lempicka, David Greenspan’s The Bridge of San Luis Rey, Seder, The School for Wives, and Marie Antoinette. He can be seen in the film The Family and is the voice behind the character Dr. Orpheus on Adult Swim’s The Venture Brothers.

Tony-nominee Anita Gillette returns to the Playhouse to portray Princess Dragomiroff. Perhaps best known for her performance as Mona the mistress in the film Moonstruck, or for her portrayal as Tina Fey’s mother in NBC’s 30 Rock, Ms. Gillette has had an illustrious career on stage and screen, with more than fourteen Broadway shows to her credit, including Chapter Two (which earned her a Tony Nomination for Best Actress in a Play and an LA Drama Critics Award), as well as the Off-Broadway production of The Big Meal for which she was nominated for a Lortel Award. She has performed at the Playhouse numerous times, starting in 1976 with Sabrina Fair, followed by Chapter Two in 1980, The Inkwell in 1982, Steel Magnolias in 1990, How the Other Half Lives in 1994, and Alone Together in 1998. and in guest appearances on Modern Family, Blue Bloods, Elementry, Cold Case, Sex & The City, Frasier, Law & Order, and Mad About You.

Tickets are on sale now with preview performances starting at just $36, and economy seating at $51 each. To learn more about becoming a Playhouse member, subscriber, or to purchase tickets and gift cards, visit www.ogunquitplayhouse.org or call the Ogunquit Playhouse Box Office at 207-646-5511.