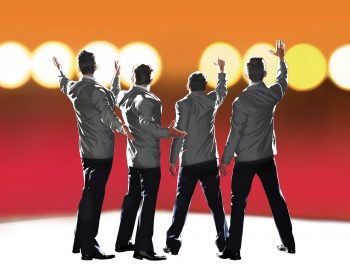 The multi-Tony Award-winning, international sensation that took Broadway and the world by storm, makes its Northeast premiere at the Ogunquit Playhouse, on stage September 5 through October 28. Jersey Boys takes audiences on an exhilarating journey behind the music of mega-stars Frankie Valli and The Four Seasons. The musical was penned by Marshall Brickman and Rick Elice with music by Bob Gaudio and lyrics by Bob Crewe. It follows the incredible story of four guys bound by one dream, who worked their way from the streets of New Jersey to the heights of stardom. Audiences around the world have gone wild over the electrifying performances of the golden greats that took these hometown boys from Jersey all the way to the top of the charts: “Sherry,” “Big Girls Don’t Cry,” “Can’t Take My Eyes Off You,” “Dawn,” “My Eyes Adored You,” and many more.

Starring as Frankie Valli, lead vocalist of The Four Seasons is Jonathan Mousset. He has performed in many regional theatres across the U.S. in such shows as Newsies, In the Heights, and Godspell. Mr. Mousset has also performed in concerts at New York City venues including 54 Below, the Times Center, and the Town Hall. Matthew Guy Magnusson makes his Ogunquit Playhouse debut as Tommy DeVito, lead guitar player of The Four Seasons. Mr. Magnusson has numerous regional theatre credits including Grease, Spring Awakening, American Idiot, and Ring of Fire.

Performing as Bob Gaudio, songwriter behind The Four Seasons is Andy Christopher. Mr. Christopher has performed as Buddy Holly in the National Tour of Buddy: The Buddy Holly Story and in many regional theatres across the U.S. including Bucks County Playhouse, Flat Rock Playhouse, West Virginia Public Theatre, The Muny, Pittsburgh Civic Light Opera, Great Lakes CFA, Fulton Theatre, Maine State Music Theatre, Casa Mañana, and the Ogunquit Playhouse where he got his start in 2012. Returning to the Playhouse to star as Nick Massi, The Four Seasons bassist is Matthew David Amira. Mr. Amira was last seen at the Ogunquit Playhouse in the 2016 production of The Hunchback of Notre Dame. His many regional theatre credits include Madame Defarge, She Loves Me, Fiddler on the Roof, and South Pacific among others.

1 thought on ““Jersey Boys” Comes To The Ogunquit Playhouse”