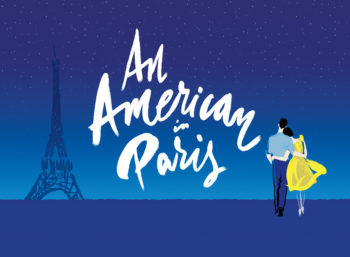 One of the most captivating musicals ever to be adapted for the stage, An American in Paris, makes its regional premiere at the Ogunquit Playhouse July 11 through August 4. This exquisite musical is inspired by the Academy Award-winning film that starred Gene Kelly and Leslie Caron and features music and lyrics by George and Ira Gershwin with book by Craig Lucas. The Ogunquit Playhouse is proud to be the first regional theatre in the U.S. to produce this new musical, which won four Tony Awards in 2015. The stunning combination of iconic music, timeless love story, breathtaking ballet, energetic tap dancing and an all-new design created exclusively for the Ogunquit Playhouse results in a spectacular musical that includes the Gershwin songs “I Got Rhythm,” “Liza,” “’S Wonderful,” “But Not for Me,” “Stairway to Paradise,” and orchestral music including “Concerto in F,” “2nd Prelude,” “2nd Rhapsody,” “The Cuban Overture,” and “An American In Paris.”

An American in Paris tells the romantic story of World War II veteran Jerry Mulligan (Clyde Alves) who, hoping to start a new life, chooses newly-liberated Paris to make a name for himself as a painter. His life becomes complicated when he falls for Lise (Julie Eicher), a young Parisian shop girl, only to learn he is not her only suitor. This lavish new musical is guaranteed to sweep you off your feet, and into the arms of a story you’ll never forget.

Starring as Jerry Mulligan is Broadway’s Clyde Alves in his Ogunquit Playhouse debut. Mr. Alves’ numerous Broadway credits include Bullets Over Broadway, Nice Work If You Can Get It, Anything Goes, Wicked, Hairspray, Oklahoma!, On The Town, for which he received an Astaire Award nomination, and The Music Man, for which he won an Astaire Award for his performance as Tommy.

Co-starring as Lise, the mysterious Parisian shop girl who catches Jerry’s attention, is Julie Eicher who is also making her Ogunquit Playhouse debut. Ms. Eicher was in the National Tour of Phantom of the Opera, and has performed at Lyric Opera of Chicago in Carousel, and Theatre by the Sea in Young Frankenstein. She has also performed with the Nashville Ballet, Dayton Ballet, Ballet Neo, and Artisan Dance Company as well as on television’s “So You Think You Can Dance.” This fall she will be joining the National Tour of Miss Saigon.