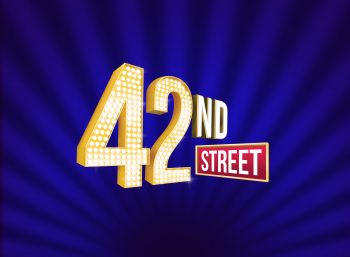 The delightful and dazzling show tells the story of aspiring chorus girl Peggy Sawyer who leaves her small town for the big city and soon lands her first job in the ensemble of a glitzy new Broadway show. Mayhem and mirth ensue when just before opening night the leading lady breaks her ankle. Will Peggy be able to step in and become a star? The musical 42nd Street isbased on the novel by Bradford Ropes withbook byMichael Stewart and Mark Bramble. The score by Harry Warren(music) and Al Dubin (lyrics), is chock-full of Broadway standards, including “You’re Getting to Be a Habit with Me,” “Dames,” “We’re In the Money,” “Lullaby of Broadway,” “Shuffle off to Buffalo” and “Forty-Second Street.”

Rachel York returns to the Ogunquit Playhouse as Dorothy Brock, the quintessential Broadway diva. Ms. York last dazzled Playhouse audiences as the Lady of the Lake in Monty Python’s Spamalot. She was most recently seen on Broadway in the musical Head Over Heels, and is best known for her critically acclaimed Broadway performances in City of Angels, Les Misérables, Victor/Victoria (Drama Desk Award) with Dame Julie Andrews, and for her portrayal of Lucille Ball in the CBS TV movie, Lucy. Ms. York has stunned audiences of the stage, screen, and concert halls across the country through her numerous National Tours, regional theatre appearances, concert performances, and TV guest-starring roles.

Two-time Emmy Award and Golden Globe Award winner Sally Struthers joins the cast as Maggie Jones. Ms. Struthers is best known for her role as Gloria in the groundbreaking TV series, All in the Family as well as reprising that role in the series spin-off, Gloria. She also appeared on Fox television series 9 to 5, and in recurring roles on the CBS’s Still Standing and the CW network’s Gilmore Girls. Sally Struthers has performed many roles at Ogunquit Playhouse including Punky Olander in Grumpy Old Men the Musical, Evangeline Harcourtin Anything Goes, Duchess Estonia Dalworth in Nice Work If You Can Get It, Mama Morton in Chicago, and Paulette in Legally Blonde.

Broadway veteran, Steve Blanchardstars as the notorious Broadway director Julian Marsh. He is probably best known for his portrayal of Beast in Disney’s Beauty and the Beast in both the Broadway production and First National Tour. Other credits includeFred in A Christmas Carol, Lancelot in Camelot with Robert Goulet, Pulitzer in Disney’s Newsies, and Pa in Little House on the Prairie. Joining the cast as the starry-eyed chorus girl, Peggy Sawyer is Jessica Wockenfuss who also performed the role in the North Shore Music Theatre’s 2017 production. Off-Broadway, she has been seen in Hey, Look Me Over!, and Me and My Gal. Her National Tour credits include Jersey Boys, Irving Berlin’s White Christmas, The Little Mermaid, and Monty Python’s Spamalot. ConO’Shea-Creal will make his Ogunquit Playhouse debut as Billy Lawlor. His Broadway credits include Irving Berlin’s White Christmas and Side Show, and he has performed in many National Tours including Cameron Mackintosh’s Mary Poppins as Bert, Irving Berlin’s White Christmas with Randy Skinner, and Something Rotten.

For ticket information visit www.ogunquitplayhouse.org or call the Ogunquit Playhouse Box Office at 207-646-5511