Returns Us To The Bright Side Of Life

In the early spring of 2020 hope began to fade that the Corona Virus was going to recede, and the reality that life for all of us was going to be quite different for some time was setting in. At the time Brad Kenney, Executive Artistic Director of the Playhouse, had to make the announcement the 2020 Season would be canceled. Brad did this via video and the poor guy could not have looked more beaten down. His heart and soul is in the Ogunquit Playhouse and having to let the public know the curtain wouldn’t be going up last year was heart wrenching. It seemed sure the place would  remain dark for a long time. Some wondered if it would be able to survive.

Well, Brad may have been staggered and even floored, but the count never got to ten. He soon recovered and was back in the fight, a fight he was not going to lose. After having to refund over 50% of the ticket sale money for the up coming season Brad went to work on fundraising, and more importantly, keeping the flame burning at the playhouse. This began with video talks with Playhouse Alumni such as Sally Struthers. The mood was changing for the better. Next was the Playhouse Cabaret Series where performers from past seasons displayed their talents before small crowds outside the theatre in a cafe setting. So, even though the season was officially canceled, there were still performances taking place before a live audience.

As the 2021 Season approached it was still unknown if the COVID restrictions would allow for the theatre to reopen. Since it takes some time to put together full scale productions it was decided to build a pavilion next to the theatre where it would be easier to allow for social distancing and ventilation.

With generous donations from the many loyal supporters of the Playhouse, and a huge gift from benefactors Carol and Noel Leary, the Leary Pavillon was erected and a four show season was planned.

The laughter that came from the audience in response to those lines shows the resilience people have and how, just like the Ogunquit Playhouse, we are not giving up.

It was an interesting choice as the first musical to play since the pandemic hit in that it opens with references to plague and deaths. Grim? Not at all, gallows humor is exactly what is needed at this time. The laughter that came from the audience in response to those lines shows the resilience people have and how, just like the Ogunquit Playhouse, we are not giving up.

Charles Shaughnessy is excellent in leading the cast as Arthur the King who just can’t seem to command respect. Sent by God on a quest to find the Holy Grail, Arthur is accompanied by his faithful companion Patsy (Jen Cody). Along the way the King assembles members of his Knights of the Round Table, a motley crew who often take things Arthur says literally which causes more than a little Pythonish confusion.

Dennis Galahad (Daniel A. Lopez) is not easily convinced to become a knight as he has the radical idea leaders should be chosen by the people and not by Divine Right. The Lady of the Lake (Mariand Torres) appears and wins over Dennis with Come With Me who now becomes Sir Galahad. Ms Torres while singing hilarious songs shows her talent as a genuine Broadway Belter with the Diva’s Lament and Find Your Grail/The Song That Goes Like This.

Jen Cody is outstanding as Patsy. Her performance of the show’s best known song Always Look On The Bright Side Of Life was pitch perfect, and she showed great comedic expressions when Mr. Shaughnessy sang I’m Alone. Poor Patsy who had stood by the King throughout thick and thin was a riot as she looked to the audience with “What about me looks?” as Arthur spun his tale of loneliness.

With many of the devices that make Monty Python so popular, such as a giant wooden rabbit, the huge hand, poking fun at the French, and riding on horseback sans horses, fans won’t be disappointed.

The big show tunes are a treat as well. You Won’t Succeed On Broadway (Josh Grisetti) is Mel Brooksian in its formula for it’s humorous take in what you need to produce a Broadway Show while His Name Is Lancelot (Nic Rouleau) is best described as Lancelot’s coming out song.

Music, laughter, beautiful sets, and the joy of the Ogunquit Playhouse is back. Life is good again.

By the finale the audience was fully back in theatre mode. Music, laughter, beautiful sets, and the joy of the Ogunquit Playhouse is back. Life is good again. 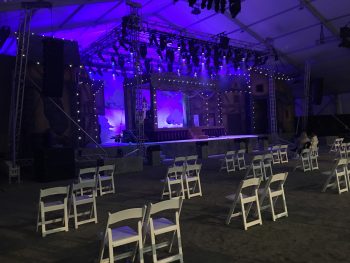 I’d like to say a few things about the Leary Pavilion. While it is different from the main theatre it is a very interesting setting for a play. It accommodates 75% of the Playhouse’s indoor capacity. The 25,000 square foot steel structured, fully covered, open air performance venue has a 96 foot wide stage, a full array of lighting, and much better acoustics than I expected. A major plus is having the seats arranged in “pods” of two for social distancing. This also ensures every audience member is guaranteed an aisle seat with plenty of leg room. For a fidgeter like me this is a positive delight. Site lines are clear and unobstructed. You doin’t have to crane your neck to look past people’s heads. Is the pavilion better than the indoor theatre? No. Is it worse? No. It is a different and very interesting experience, and it works very, very well.

Brad Kenney deserves more than high praise for making this all happen. Don’t think twice about buying tickets for Spamalot and the rest of the season. Come out of your cocoon and step into the world of outstanding musical theatre at the Ogunquit Playhouse. It really feels good to be back looking at the bright side of life!