Over my lifetime in boxing I
have heard the story of the first
Louis – Conn fight countless
times. Most followers of the Art
of Boxing are familiar with it.
Conn was boxing rings around
Joe Louis for twelve rounds and
leading on all the scorecards.
All he had to do was keep
dancing and jabbing and he
would win the fifteen round decision, but instead, the former light heavyweight champ got cocky in the thirteenth round and went for the knockout and ended up getting kayoed himself.

I recently noticed that ESPN Classic was going to show the fight and I began to realize, even though I was sure I knew just what happened during the match, that I had never seen more then some highlights from the bout. The memory I had of it was from what I had heard from boxing people throughout the years. I made some calls to a number of people well versed in the sport and asked each one how they believe the fight went, specifically, what punch did Conn rely on the most. With one exception, I was told that Conn had used his jab extensively and danced around Joe keeping himself at a safe distance from the champion’s power. It wasn’t until he decided to knock out Louis that he got close and Joe was able to end the fight. I also remembered a bit different version of the bout that was related to me by my trainer many years ago. I decided I was going to record the ESPN showing of the fight and see for myself how it went. They did show all the rounds, but many of them were not complete. Though I would like to see the fight in it’s entirety, I do believe I saw enough to understand Billy’s strategy against Louis.

It is also interesting to note that in his seven bouts against the big men [Conn] scored kayos in five of them.

A little background  first. Billy Conn was taken seriously as a challenger to Joe Louis. Conn had given up his light heavyweight title a year before in order to campaign full time as a heavyweight. He defeated a number of leading contenders including Bob Pastor (KO 13), Al McCoy (UD 10), Lee Savold (UD 12), and Gunnar Barland (TKO 8), so he had earned his chance at the championship. It is also interesting to note that in his seven bouts against the big men he scored kayos in five of them. That is almost half of the knockouts he scored in his entire career. Conn is not remembered as a big puncher, but he did show power against larger opponents. It was not because Conn had bulked up, as he did not. I would argue it was because the bigger opponents were slower and easier targets for his shots.

In the title fight Louis’ weight was announced as 199 1⁄2 (Joe worked hard to get below 200 for the weigh in as he didn’t want to seem to be a lot bigger then Billy). Conn came in officially at 174. It is believed by many that when they stepped into the ring their weights were 204 and 169 respectively. Giving Louis an advantage of over thirty pounds. 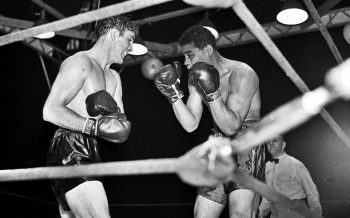 Now to the fight itself. Did Conn actually dance circles around Louis while sticking him with repeated jabs? No. Billy knew from the outset that it would be suicide to trade jabs with Joe, as the champion possessed the best left jab in heavyweight history. On top of this, Louis was also a genius at slipping and countering his opponent’s jab, and Joe had a great reach advantage over Conn. So, what was Conn to do?

Billy kept moving on his feet while feinting, but he didn’t stay that far away from the champion.Instead, he would move in and out. He would begin a jab, but then as Louis would start to counter it, Conn would turn it into a left hook, this is known as hooking off the jab. Billy would also get in close and throw left and right hooks to the body and head along with uppercuts, then he would tie up the champ. He was very fast and accurate, and he threw very few jabs throughout the fight. 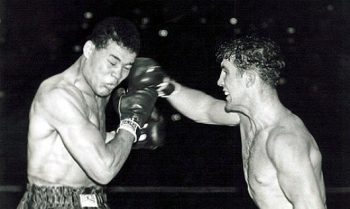 Of course, during all of this Louis wasn’t just standing there. Joe was having a lot of trouble dealing with Billy, but he never lost his cool. The very hard punching champion was landing a lot of solid shots to Conn’s body. These punches began to take a toll in the later rounds as Billy’s legs began to weaken and he was losing strength. In the eighth round Conn shook Joe with a left hook. Billy had a very good round in the eleventh and shook his fist in the air after the bell rang as if to say, “The title will soon be mind”. Even though the eleventh round saw Conn landing solid blows on Joe, he was paying a price for it as Louis continued punishing him to the body.

Things became very interesting in the twelfth round. Conn came out on fire at the bell. His hands were still moving very fast, but his legs had slowed down just a bit. He continued mixing it up inside with Joe even staggering the champion a couple of times. On one of
these occasions as Joe was sent reeling, he threw his weight onto Billy. Billy pushed him off, but expended a lot of energy in doing so.

Billy’s knees buckled, and after the bell sounded he seemed disorientated and was confused as to where his corner was.

Now, and this is something you have to look very carefully to see because of the camera angle, just before the bell rang ending the round, Louis hit Conn with a very hard right hand. Billy’s knees buckled, and after the bell sounded he seemed disorientated and was confused as to where his corner was. His seconds seemed to notice this as they jumped into the ring and started splashing water on his face. This was the beginning of the end.

As the bell sounded for the fatal thirteenth round, Conn came out and tried to continue with his strategy of slipping inside and throwing hooks, but he was weaker now. He seemed to be going all out with what little he had left in him, but Joe could smell blood. Billy got off a couple of great combos, but then Joe went to work. He started connecting with uppercuts. Conn was hurt, and he was in with a guy who knew how to finish a fight. Louis ended the bout with a right uppercut and devastating left hook. Conn valiantly tried to get to his feet, but his legs would not respond. He had given it his all.

The narrative after the bout that has lived on is that Conn had the title and only had to dance around for the last three rounds in order to gain the decision. That instead, he got cocky and decided to slug with the champ. I believe Conn did not changed his tactics, that he had been worn down by Louis’ superior strength and body punches, and that he had no choice but to make a last stand and try to win by knockout.

It should also be noted that, while Conn was leading on the scorecards, he did not have the fight in the bag.

It should also be noted that, while Conn was leading on the scorecards, he did not have the fight in the bag. The scores through twelve were 5-7, 4-7-1 even, and 6-6. He had a good lead but Louis still could have won on points by taking the last three rounds. 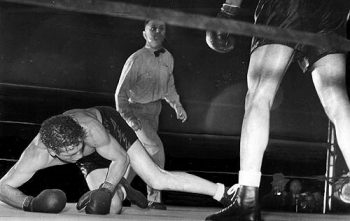 None of this is meant to take anything away from Billy Conn. He fought a brilliant fight against a man considered by many to be the greatest heavyweight champion of all time. He showed guts, speed, power, and amazing skill, but Louis showed the patience that is the mark of a great champion and never lost his cool. This is a fight that should be studied by all boxing aficionados. It is one of the great fights of all time, and there is much to be learned by watching it.