A Play with Original Songs by the Author of Silent Sky, I and You, 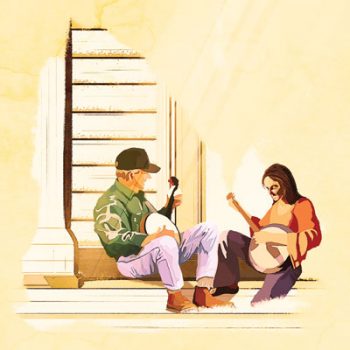 Merrimack Repertory Theatre (MRT) will present the world premiere of The Heath by Lauren Gunderson, one of the most produced playwrights in America (Silent Sky, I and You, Miss Bennet: Christmas at Pemberley) from February 13 to March 10 at the Nancy L. Donahue Theatre at Liberty Hall, according to Artistic Director Sean Daniels and Executive Director Bonnie J. Butkas.

A new play with music about the playwright’s relationship with her grandfather, The Heath is directed by Artistic Director Sean Daniels (The Lion, Miss Bennet: Christmas at Pemberley, Little Orphan Danny). The play includes banjo, four original songs, and several traditional tunes.

In The Heath, Gunderson turns her prodigious storytelling skills on herself as she wrestles with how you make peace with a beloved relative who seems unlike you in every way. This beautiful, funny meditation on her grandfather’s life draws on everything from Shakespeare to Bluegrass in a soul-stirring story of redemption, love, madness, and the science of memory.

Of The Heath, Gunderson said, “I started the script before my PawPaw died as it occurred to me that the only reference I had for his condition was the literary figure of King Lear. It’s a love letter to him, an apology, and a reckoning, as well as a chance to discover a man I thought I knew so well.

“I was inspired to add banjo to the play when I remembered how much PawPaw loved Flatt and Scruggs bluegrass music. It felt like a crazy challenge to myself. The songs are simple but full of emotion and heart. The big ending song, Storm Still, was the most cathartic to write. It really allows me to say, ‘I love you, I miss you, I’m proud of you,’ to my grandfather,” she said.

The cast features Miranda Barnett as Lauren and George Judy as KD, her grandfather, and King Lear.

A classically trained musician-turned-actor, Barnett has been studying the banjo for the past three months in anticipation of the show. A native and resident of South Carolina, her credits include The Rocky Horror Picture Show; Vanya, Sonia, Masha and Spike; Sweeney Todd; and Les Liaisons Dangereuses.

George Judy is the Gresdna A. Doty Professor of Theatre at Louisiana State University, as well as the former head of the MFA Acting Program there and former Artistic Director of Swine Palace, LSU’s Equity theatre-in-residence. He has appeared in numerous Shakespeare productions, including King Lear, The Tempest, The Merry Wives of Windsor, and A Midsummer Night’s Dream, at the John F. Kennedy Center for the Performing Arts in Washington, D.C., Royal National Theatre in London, and the Utah, Texas, and Kentucky Shakespeare festivals, among many other venues. FUN FACT: George Judy was Sean Daniels’ acting coach in college.