“In the clearing stands a boxer and a fighter by his trade and he carries the reminders of every blow that laid him down or cut him till he dried out in his anger and his shame, I am leaving, I am leaving, but the fighter still remains.”  Paul Simon, The Boxer

There has a been a strong connection between boxing and the arts that goes back thousands of years. The Terme Boxer from 1st Century ancient Greece is one of the finest pieces of sculpture ever created, and it shows clearly the face of a veteran boxer who has suffered the blows that Paul Simon wrote so expressively about. Look closely at this work and you will see the broken nose and cauliflower ears that is the trademark of boxers throughout the ages. Note how his hands are bandaged to not only protect his fists, but to also

allow him to inflict more punishment on his opponents. The grim determination in his face is very moving. After a visit to New York City, this warrior is back home in Rome.

Fighters have been portrayed in plays and movies over and over again. On the stage Golden Boy, by Clifford Odets first played on Broadway in 1937 with Luther Adler playing the lead role of Joe. The supporting cast was absolutely amazing and included Lee J. Cobb, Karl Malden, Elia Kazan, Harry Morgan, Howard DeSilva, Karl Malden, and John Garfield.  It doesn’t get any better then that. Garfield would go on to play the lead role in a revival of the play in 1952. Garfield also portrayed Charley Davis in the movie Body and Soul, another great boxing movie and his most famous role. Years later Sammy Davis Jr. would step into the same role of golden Boy. He got some expert coaching for the part from a guy who knew a little about boxing, the great Sugar Ray robinson.

In 1997 I had the good fortune to see the world premiere of a new play, Tunney / Shakespeare In Six Rounds. The play was written by David E. Lane and starred Jack Wetherall. Appropriately, it opened at the Merrimack Rep in the great boxing town of Lowell. The story line is based on the time Gene Tunney gave a lecture on Shakespeare at Yale University. Wetherall was superb in the role of Tunney and showed the intellectual side of the great champion who loved Shakespeare as much as boxing. I hope to see it revived some day, as it deserves to be seen by a larger audience.

Rocky, The Musical will be opening on Broadway this February. I am curious to see how that is staged. Will Rocky be serenading Apollo Creed? Could be interesting.

Boxing lends itself very well to the big screen. I have already mentioned Body and Soul, but there are so many others. Who can ever forget Marlon Brando as Terry Malloy in On The Waterfront. His lines, “I could have been a contender” are firmly embedded in the American culture. Robert Ryan was outstanding in the role of Bill Stoker Thompson, the washed up pug stepping into the ring in The Setup, a great film noir and one of the best boxing movies ever made. Ryan had been a champion college boxer and it shows in the fight scenes. Other great boxing movies include Fat City with Stacy Keach, Champion starring Kirk Douglas, and Raging Bull, the life of Jake LaMotta with Robert DeNiro in the lead role. Filmed in balck and white and filled with raw intensity, it is considered one of the best American movies ever made.

Both Thomas Eakins and George Bellows did some great paintings of boxers. Bellows was from the Ashcan School of Art and portrayed the fighters in his work as almost blending into each other. Stag at Sharkey’s was his most famous, but he also did a terrific piece with his subject being the Dempsey Firpo fight. Bellows always included himself in his paintings. It is a bit like how Alfred Hitchcock always made an appearance in his films.

Eakins’ work was more traditional but very detailed and impressive. His two most well known boxing pieces are Between Rounds and Salutat. Both were painted in the 1890s and appear to be set in private clubs. They look quite sanitized when compared with Bellows’ work, but are beautiful works. 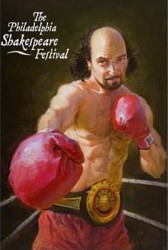 Take some time to explore this connection between the arts and boxing. You will also find plenty of music, literature, and poetry on the subject. It is a rich and fun topic. If Will Shakespeare had been around back in the glory days of boxing, I am sure you would have found him hanging out at Stillman’s Gym.

Happy New Year to all of my readers. I do hope this is a safe year for all those brave boxers who enter the ring, and I hope they are respected and cared about by those who make so much money off of them.