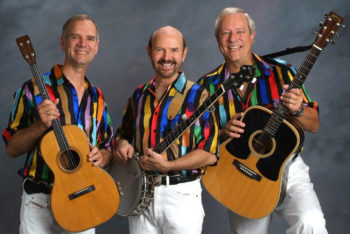 In 1957, The Kingston Trio emerged from San Francisco’s North Beach club scene to take the country by storm, bringing the rich tradition of American folk music into the mainstream for the first time. During the late 50s & early 60s, the Trio enjoyed unprecedented record sales and worldwide fame, while influencing the musical tastes of a generation. Through changing times, the Trio has played on, remaining popular for a simple reason…great songs that sound as good today as the first time you heard them.

…great songs that sound as good today as the first time you heard them.

And fifty-eight years after Tom Dooley shot to the top of the charts, the Trio is still on the road thirty weeks a year, bringing back all the great memories and making new ones.

The Narragansett Bay Chorus is the performing unit of the Providence Chapter of the Barbershop Harmony Society – the largest male singing organization in the world! Competitively, the chorus has been the Society’s District winner on fifteen separate occasions.

Based in the Greater Providence area since 1949, the Narragansett Bay Chorus is a premier chorus that sings popular music a cappella in four-part harmony. They perform, primarily in the New England area, but have also performed in England, Canada, and across the United States. Membership includes men of all ages from Rhode Island, Massachusetts, and Connecticut.

American A Cappella featuring The Kingston Trio will be presented on Saturday, September 10 at 2:00 pm and 7:30 pm. The theatre is located at 1245 Jefferson Boulevard, Warwick, RI. Tickets are $50 for premium seating, $40 for standard seating and $25 for value seating and are on sale at the box office Monday through Friday from 12 noon – 6:00 pm, Saturdays from 12 noon – 4:00 pm and performance days from 12 noon – curtain. Tickets are also available online 24 hours a day at www.OceanStateTheatre.org and via telephone during normal box office hours by calling (401) 921-6800.