A Very Important Film That Will Save Lives 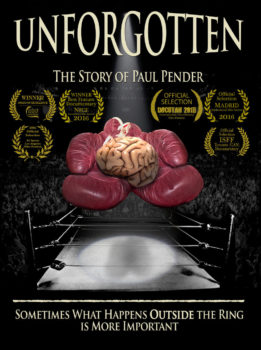 A few years ago film director Felice Leeds got in touch with me about a film she was making about Paul Pender. She told me it would be dealing with more than just Paul’s career as a boxer. We exchanged emails and phone calls. Occasionally, I would hear the production was making progress, but I have been approached by other people trying to make boxing films, and they never seem to go anywhere. With this history, I really wasn’t expecting much from Ms Leeds’ project.

Last Sunday I finally got to see the finished product at a screening at the Boston Film Festival. Not only is this documentary one solid production, it is also an extremely important film.

In 2003 former World Middleweight Champion Paul Pender died at the age of 72. For the previous 15 years it had been thought Paul was suffering from Alzheimer’s Disease. It wasn’t until his brain was examined after his death that it was discovered not to be Alzheimer’s but rather Chronic Traumatic Encephalopathy (CTE), a disease caused by mild repetitive trauma to the head. These sub-concussive blows to the head are most serious when received at a young age. It was found that Paul had a very serious stage of the disorder CTE (stage 4). It became the  index brain for the research that is ongoing Boston University and is the brain all other cases are compared to.

Unforgotten, The Paul Pender Story tells us about Paul’s life, his boxing career, his outspokenness about the corruption in the sport, and his battle with recurring hand injuries that often put his quest for the title on hold. There is amazing footage of Paul’s fights, of him training at the New Garden Gym, as well as taped interviews with the champ. Watching the Brookline fireman’s rise to the top culminating in his winning the title from Sugar Ray Robinson is a great story in itself, and boxing fans will be thrilled with just that.

However, there’s much more to this fine movie. We learn that on top of being a great boxer, Pender was also a very intelligent man who attended elocution school and loved to quote Shakespeare. If things had been a bit different for him he very well may have ended up a college professor. He certainly possessed the intellect for it. We also become aware that his very strong brain was also being damaged over his years of playing contact sports.

While CTE was first thought to primarily affect boxers (dementia pugilistica) it has been found to be prevalent among football players as well. It is a progressive disease that can also occur in anyone, not just participants in contact sports, but also in those who have suffered repeated repetitive head trauma in other ways.

Dr. Ann McKee directs the Boston University CTE Center based at the Veteran’s Administration Medical Center in Bedford, MA. In the film she points out how the younger a person is when they suffer a head injury the more susceptible they become to developing CTE later in life. It is very possible Paul Pender already had damage from his days of playing high school football

in Brookline. If that damage already existed it would have been exacerbated by his career as a boxer. This is something that should give every parent pause when they are considering allowing their son or daughter to play a contact sport. Once damaged, the brain does not heal.

In a panel discussion after the film Dr. Robert Cantu, author of Concussions And Our Kids, talked about someday having tests that will show whether or not signs of CTE are beginning to show in the brain. Right now the only way to know for certain is to examine a brain after the patient has died. Could finding markers early on help prevent the onset of symptoms later in life? That is a question that can’t be answered, but at least the person, such as a boxer, could be denied a license to fight so that the damage is not made worse. He also points out that research needs to be done on the brains of people who have participated in contact sports but are asymptomatic. It has always been a puzzlement as to why some athletes, in spite of having received repeated blows to the head, never develop CTE. There is so much more to be learned about this terrible but preventable disease.

This movie is great on so many levels. It finally gives Paul Pender the respect and recognition he deserves for his great boxing ability. He has been known as the forgettable boxer, but

after watching this film you will never forget Paul Pender

after watching this film you will never forget Paul Pender.

Audiences are also brought back to the days when boxing was one of the most popular sports in the country. The time when great fighters like Tony DeMarco made Bostonians proud. Tony, along with fellow boxers Joe DeNucci, Tom McNeeley, and Matt Farago are interviewed. Former great amateur boxer Richard Torsney, a longtime friend of Pender’s, gives us insight into the personal side of the Champ. Historian Dan Cuoco and author Mike Silver (Stars In The Ring and The Arc of Boxing) not only share their insights about the finer points of the art of boxing, but also discuss the emotional side of  what it means to be a boxer. Mr. Silver describes it as a “Calling”.

Director Felice Leeds reminds us of a person who should definitely not be forgotten, and that is Rose Pender, Paul’s widow. Ms Leeds describes her as the true hero in this story, and I couldn’t agree more. It is Rose who got this all started by making the difficult decision to allow Paul’s brain to be used for research. This courageous woman who spent years caring for her husband while raising a family now has allowed the rest of us to benefit from the research that is based on her husband’s brain. Her action will save lives and prevent much suffering. We all owe Mrs. Pender much gratitude.

Felice Leeds has made a fine documentary. As I wrote earlier, it is an important piece of work and deserves a wide audience. It is time we as a society look at what is happening on the playing fields and in the boxing rings. It is time we consider the danger we are putting our fellow human beings into for the purposes of entertainment. It is time we work to make sports safer while still retaining the competitiveness that builds character and self-discipline.

Richard Johnson, the curator of the Sports Museum in Boston, best described this film during the panel discussion. I believe he was quoting Paul Pender when he said “It is a full day if you have laughed and cried.” This documentary will make you do both.

Many thanks to Felice Leeds for making this film. I urge everyone to see it when they have the chance. It will make you laugh and cry. And I hope it will make you think about the price so many athletes pay for entertaining us.

Trailer: Unforgotten, The Story of Paul Pender from Felice Leeds on Vimeo.