Tony DeMarco To Be Inducted 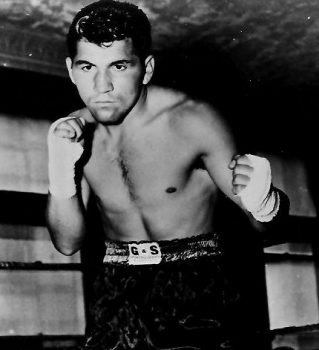 Former Undisputed Welterweight Champion and Boston favorite son Tony DeMarco was known in his day campaigning in the professional ring as having  a devastating knockout punch. In 58 victories he kayoed 33 opponents. While he did go the distance on a number of occasions, no fight lasted as long as the time he has waited to be honored with an induction into the International Boxing Hall of Fame in Canastota, NY. Politics and personalities play a role in these things, but Tony is finally being recognized for the great champion he was and is. It is an honor he deserved long ago and, as the saying goes, all good things come to those who wait.

Tony will be inducted on the weekend of June 6, 2019. He will now be part of the Hall of Fame that includes his most famous rival and long time friend, the late Carmen Basilio.

Tony’s boxing career was remarkable. During his 14 years in the professional ring he defeated eight world champions. The biggest of these victories came on the night of April 1, 1955 when he won the welterweight title from champion Johnny Saxton with a brutal 14th round knockout. It was an impressive performance in the Boston Garden just down the street from where Tony lived. He was magnificent that night putting on an outstanding performance. He had his shot at the title and was not going to let it get away from him.

During his 14 years in the professional ring he defeated eight world champions.

Later that same year he would lose the championship to Carmen Basilio. In the Basilio fight Tony was ahead on all the score cards and was headed to victory when he ran out of gas. The bout was voted Fight of the Year by Ring Magazine, and it was one of the most exciting ring battles of all time. Carmen and Tony became friends and remained close until Carmen’s death in 2012.

It is important to remember that when Tony was champion there were only 8 recognized divisions with one champion in each of those different weight classes. In contrast to today when it seems like anybody with a couple of pro fights is called champion, Tony DeMarco was truly a world champion.

Tony DeMarco was born January 14, 1932 on Fleet Street in Boston’s North End. His original name was Leonardo Liotta. He changed it so he could fight in the amateurs. He was too young at the time to compete as an amateur boxer, so he borrowed the name of a boy who was old enough. The name stuck and he continued using it for the rest of his life.

In a professional career that spanned the years from 1948 to 1962, the “Fury of Fleet Street” compiled a record of 58 wins, 12 losses, and 1 draw. Among his opponents, you will see listed, in addition to Basilio and Saxton, the names Johnny Cesario, George Araujo, Jimmy Carter, Chico Vejar, Vince Martinez, Gaspar Ortega, Denny Moyer, Don Jordan, Walter Byers, and Kid Gavilan. That’s a pretty amazing array of talent, and is just part of the list. With a pulverizing left hook, Tony was never in a dull fight. A Tony DeMarco fight was always an electrifying experience.

In 1962, Tony retired from the ring. For a time he lived in Phoenix, Arizona where he ran a successful night club. He later returned to Boston where he still lives with his lovely wife and best friend Dottie, not far from where he won the title. In 2011 his autobiography, Nardo: Memoirs Of A Boxing Champion, was published. If you haven’t yet read it I urge you to get a copy. It is a fascinating story.

Fleet Street has been renamed Tony DeMarco Way in his honor. On October 20, 2012 a statue of Tony was erected at the corner of Hanover and Cross Streets, the entrance to the North End. The beautiful statue represents just how well loved and respected he is by the people of Boston.

The main criteria for induction into the Hall of Fame is a fighter’s record in the ring. By that standard alone Tony should have been inducted years ago. But there is more to being a champion than wins in the ring. A true champion also knows how to carry himself with dignity and a strong measure of character. Tony DeMarco passes this test with flying colors. He has never forgotten where he came from. He greets everyone he meets with a warm smile and is quick to answer questions and to share stories of his long and remarkable life. For a man who has received so many honors and accolades, he has never allowed it to go to his head. Tony is always Tony.

On January 14 Tony DeMarco will turn 87 years old. The honor of being inducted into the Hall of Fame will be a great gift for him to celebrate. There is, however, an even greater gift he can cherish. That is the love the people of Boston have for him. No matter how many years have passed since he was champion, the affection shown him by those who live in Boston and those in the world of boxing has never faded, in fact it has grown.

We are all very proud to know Tony will receive this honor, but he was in the Hall of Fame of the people of Boston years ago. We love you Tony and share in your joy!

The International Boxing Hall of Fame is located at 1 Hall of Fame Drive, Canastota, NY. The phone number is 315.697.7095. There website is: www.ibhof.com