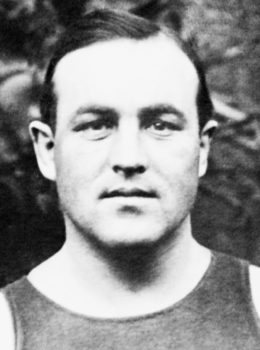 Unfortunately, Tommy Burns is best remembered for being the man from whom Jack Johnson won the Heavyweight title. That fight took place in 1908 in Sydney, Australia with Johnson winning a one sided victory. The fight has been recorded as a stoppage win for Johnson, but in some records it is stated Johnson won on points. The reason for the discrepancy is because an agreement had been made before the bout that if the police stepped in and stopped the fight it would be decided on points. Indeed, the police did put an end to the action, but it was apparent Tommy was not going to last much longer, so a stoppage victory is more the truth.

It has also been reported that Burns went into the fight still suffering from the effects of influenza. This is not to imply he would have beaten Johnson if he had been in top shape, but it goes to show the tremendous courage Tommy showed in standing up to Johnson for 14 rounds. Tommy not only stood up under a heavy physical beating, but also had to endure Johnson’s humiliating taunts. In spite of all this Burns never took a backwards step and gave it his all.

Born Noah Brusso on June 17, 1881 in Normanby Township near Hanover, Ontario, Canada, his family was of German descent and very poor. Tommy was the 12th of thirteen children, five of whom died before reaching adulthood. Tommy eventually landed in Detroit where he began his boxing career. He changed his name to Tommy Burns and began gaining quite the reputation as a small man who would take on opponents regardless of size. Burns had very strong legs from where he got much of his power.

Tommy’s first major bout was against all-time great Philadelphia Jack O’Brien, and while he lost a decision to O’Brien he gave a good account of himself. He would go on to fight O’Brien two more times, both matches being in defense of his heavyweight title with one bout ending in a draw that most people thought Tommy won and the other in a clearcut victory for the champ.

At 5’7” Tommy Burns was the smallest heavyweight champion to ever hold the title. He was also one of the most active, as well as a true world champion defending the title all around the world and against all comers.

Burns first laid claim to the heavyweight championship with a victory over Marvin Hart. Hart had been designated the champion by Jim Jeffries when Marvin defeated Jack Root. Jeffries, who had retried as undefeated champ, thought he could name a successor, but the public never really accepted Hart. Nor did they accept Burns when he defeated Hart. Tommy knew this and decided to prove his worth by traveling the world and fighting the best fighters different countries had to offer. This took him to such places as London, Dublin, Paris, and Melbourne, Australia. Eventually he would gain public acceptance.

Because of his small stature Tommy was often the underdog even when defending the title. He proved the oddsmakers wrong time and time again making thirteen defenses of the crown, the 4th most of any title holder. Two of those defenses came on the same night. Eleven of the victories were by knock out with only Jack O’Brien lasting the distance with him which he did on two occasions by running and holding. Burns’s kayo of Bill Squires at 1:28 of the first round is one of the fastest wins in any heavyweight title fight.

It has been widely reported that Tommy was ducking Jack Johnson and was forced into fighting him when Jack pursued him around the world. In reality, Tommy was also a smart businessman who managed himself. He held out for a big payday knowing the fight would be a huge attraction. When his demand for $30,000.00, more than twice the amount ever paid to a heavyweight champ was met, he quickly signed for the fight.

Burns was the first and only Canadian born boxer to win the heavyweight title. He holds the record for consecutive knock outs in heavyweight title fights with eleven. He is ranked 4th highest in heavyweight history for the number of times he defended the title. Jack Johnson was the first man to stop him in a fight and he would only lose by stoppage one more time, in his last fight when he was 39 years old and had been inactive for two years.

Tommy Burns may not have been an all-time great, but in his day he was a force to be reckoned with. Always in shape with an aggressive counter punching style, he packed dynamite in both fists.

Burns retired from the ring in 1920. He engaged in several business ventures including managing boxers and running a saloon. He eventually became a minister. Burns passed away in 1955 at the age of 73.

There is a Youtube clip of him speaking long after he retried. His voice is clear and strong and he shows no effects from having engaged in 58 fights, a testament to his skills. His final record stands at 46 wins (34 by knockout), 4 losses (2 by stoppage), and 8 draws. Very impressive.

Tommy Burns deserves to be remembered for much more than his bout with Jack Johnson. He was a true World Champion.