For its 22nd season Commonwealth Shakespeare Company will be presenting Romeo and Juliet on the Boston Common. The production, which is free to the public, will run from July 19th through August 6th.

Brandon G. Green, will be taking on the role of Benvolio, Romeo’s cousin and friend. Brandon grew up in Selma, Alabama and earned his Bachelor’s Degree from Alabama State University. He moved to the Boston area to attend Brandeis University where he received his MFA. He now teaches at Brandeis.

Most recently he was seen on a Boston stage in the part of Mr. Tambo in the critically acclaimed SpeakEasy Stage production of The Scottsboro Boys. He also won the 2016 Elliot Norton Best Actor Award for his role in the Company One/Arts Emerson production of An Octoroon.

I had a chance to speak with Brandon before rehearsal at the Sorenson Center for the Arts at Babson College in Wellesley.

When we began our conversation I was struck by his rich, deep voice. I could immediately imagine Brandon in the role of the peacemaker Benvolio. His tone would convey both a calming effect and a command that would certainly enable his message to be heard and understood. Accepting that message will prove to be another thing.

Brandon Green grew up in Selma, Alabama. I asked him if there was much opportunity there for a student to pursue acting. “I went to a school that was very much about the arts when I was in the 6th grade, the School of Discovery. I got the bug there. Well, I actually had the bug before then.”

When I asked about what he used as an outlet in his younger, pre 6th grade days, he responded “Yes, I had the bug way before then. I would take part in school assemblies, Christmas Plays, as well as at church.” Was he a class clown? “No, actually, I was really quiet, very quiet. In high school I was in the marching band and choir. There wasn’t a lot, but what they did have helped me out.”

He recalls his time at Alabama State University in Montgomery fondly, “It was a really amazing program. I would argue it is one of the best undergraduate programs in the country.”

Our conversation turns to his latest project, playing Benvolio for CSC. “I kind of feel like I’m playing a bit of myself. The peacemaker almost reluctantly taking care of his cousin. Benvolio has his own things but he is definitely there for Romeo, and definitely the peacemaker. I was very much that in my friend circles. I was also the one people would come to for counsel in a way. I found myself there a lot of times, and there were times I was in need of a Benvolio in my life.”

When I ask about Benvolio being a voice of calm and reason in a play where so many characters are irrational, Brandon gives some insight. “Benvolio means good will, well wisher, peacemaker. I feel like the straight man to a lot of the chaos that goes on. He is the cool head that is trying to prevail and survive in a way.” Why is Benvolio no longer in the play after Act I? “The peacemaker in this world has decided go away. He’s not there and that dims the lights a bit.”

Brandon tells me he has always loved Shakespeare. At Selma High while in the 10th grade he took a theatre arts class. He remembers, “LeBaron Mack taught us the Scottish Play (MacBeth). It was my first way into it and I fell in love with it there. When I got to Alabama State I saw Othello. It was amazing.” Brandon would go on to the Shakespeare Theatre of New Jersey in 2010 and then to Brandeis where he got more training in classical theatre. Two years ago he played Oswald in the CSC production of King Lear.

Does he have a dream role? “I kind of already played it and that was in An Octoroon. I could not have dreamt up that role. It scared me. That was the perfect storm. A role that called on all my facilities as a performer. It was fun. It was challenging to myself and the audience. I got to let loose in a way I wanted to, or that I didn’t know I wanted to. I will carry that with me forever.”

As our conversation winds down I ask Brandon why people should see the CSC production of Romeo and Juliet on the Boston Common. “It is a magical experience. I truly believe that. Also, seeing a cast this diverse telling the story is incredible. There is nothing like this, it is transformative. You are out there with thousands of people. It’s crazy and it’s beautiful. A very unique experience.” His enthusiasm is contagious.

“Theatre is a collaborative between the audience and the performers..”

In closing I ask Brandon what he would like to say to the audience. I found his comments very thoughtful, sincere, and important. “Theatre is a collaborative between the audience and the performers, so please, we need your energy as much as you need ours. It’s reciprocal.”

Shakespeare said “All the world’s a stage.” Well, you have a wonderful opportunity to share that stage this summer with a very talented and committed actor. Join Brandon Green and the rest of the Commonwealth Shakespeare Company on the Common for what will surely be a great experience. 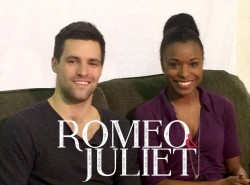