If you drive down Rt. 128 through Wakefield you will still see an exit marked Pleasure Island Road. It is one of the last vestiges of a place that in fondly remembered by many of a certain age. 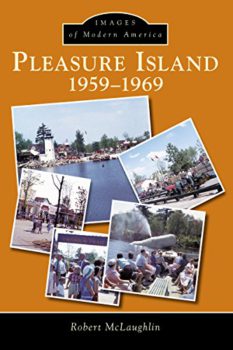 Pleasure Island was a family recreation center inspired by Disneyland and Storytown. It was a huge undertaking encompassing a total of 168 acres of dryland and meadowland. The park was conceived by a man named William Hawkes and the story of how it all came to be is the subject of the book Pleasure Island: 1959-1969 (Images of Modern America) by Robert McLaughlin. It is quite the story and Mr. McLaughlin’s passion for preserving the history of the ten years the park survived is evident on every page of his book which is also filed with wonderful archival photographs and excerpts of interviews with Mr. Hawkes as well as many of those who worked at Pleasure Island. 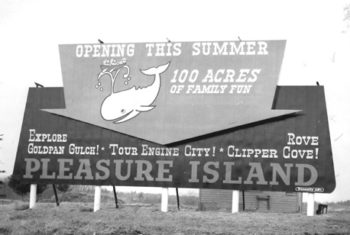 Pleasure Island wasn’t an amusement park with thrill rides. Rather, it was a theme park with many themes including Western City, Pirate Cove, Monkey Island, and Old Smokey Locomotive Ride among many other things. It also had a whale boat ride where visitors would get to see Moby Dick rise from the depths and see water gush from his blow hole.

In an area of the park was the Show Bowl where many famous entertainers of the day appeared. Among them were Ricky Nelson, Hugh O’Brien, Jimmy Dean, Neil Sedaka, Chuck Connors, The Three Stooges, Fess Parker, and Johnny Crawford. In 1960 the Boston Jazz Festival was held there with appearances by Nina Simone, Dinah Washington, and Duke Ellington. As you can see, there was no lack of first rate talent.

While walking through the park you might confront a pirate who would be quite to draw his sword and pose for a photo, or you might happen upon a shootout between cowboys. 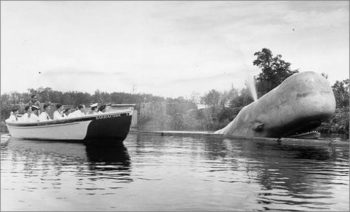 Mr. McLaughlin’s book brings back memories for those of us who were fortunate enough to have been there and it will be of interest to those who have never experienced such a hands on adventure. The story and interviews are extremely interesting and the photographs are pure gold.

Eventually, Pleasure Island closed, the victim of many forces including unpredictable weather, the struggle to find backers, and the changing times. It is now an office park with only a few traces of that once magical place still to be found. On Sunday, May 20th from 10:00 am to noon, rain or shine, Mr. McLaughlin will conduct a walking tour of the site and will discuss the history of Pleasure Island while pointing out the places where it all happened. Many former employees of Pleasure Island show up for these walks and also share their memories. I took this tour last year and I can tell you it is a terrific experience.

The location is Audubon Road in Wakefield (Rt.128-Exit42). The tour meets in the first parking lot the left after entering Edgewater Office Park. There is no charge. Mr. McLuaghlin will have copies of his book as wells two others he has written for the Images of Modern America series, Magic Mountain and Freedom Land: 1960-1964.

If you have any photographs or memorabilia from a visit to Pleasure Island be sure to share them with Robert.

For more information go to friendsofpleasureisland.org