A fresh take on a classic helmed by 2015 Emmy Award winner Richard Jenkins and Sharon Jenkins May 5-June 5, 2016 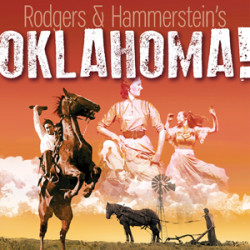 At the turn of the 20th century in the western territories, cowboy Curly vies with mysterious farmhand Jud for the heart of Laurey, the woman they both love. Packed with humor, romance, square dances and an unforgettable score, Oklahoma! is a portrait of both the naiveté and complexity of American pioneer settlers.

“We are absolutely thrilled to have Richard and Sharon bringing their signature style and relentless approach to Oklahoma!,” artistic director Curt Columbus said of the pair that brought Trinity Rep’s critically acclaimed 2014 production of Oliver! to life. “They are an incredible team, because of their commitment to emotionally evocative story telling through world class acting. Richard and Sharon personify what it means to be Trinity Rep artists. This is sure to be an Oklahoma! unlike any other.”

Richard Rodgers (composer, 1902–1979) and Oscar Hammerstein II (librettist/lyricist, 1895–1960) joined forces in 1943, creating the most successful partnership in American musical theatre. Oklahoma!, their first musical together, was the first of a new genre—the musical play—blending Rodgers’ sophisticated style of musical comedy with Hammerstein’s innovations in operetta. Oklahoma! was followed by Carousel (1945), Allegro (1947), South

Director Richard Jenkins was a Trinity Rep acting company member for 14 seasons, starting in 1970. He served as artistic director for four seasons (1990-1994) and directed numerous productions during that time. Richard has appeared in over 60 feature films, the HBO drama series Six Feet Under, and has been nominated for three Screen Actors Guild Awards, two Independent Spirit Awards, a Critics Choice Award, a Gotham Award, and received a Satellite Award, a Spotlight Award, an Emmy Award for Outstanding Lead Actor in a Miniseries or Movie for the HBO miniseries Olive Kitteridge and an Academy Award nomination for Best Actor for his performance in The Visitor. Recent credits include the film God’s Pocket with Philip Seymour Hoffman and Trinity Rep’s own Peter Gerety, as well as his Emmy-winning role opposite Frances McDormand in Olive Kitteridge.

Director and choreographer Sharon Jenkins has worked as a choreographer on productions at Trinity Rep for over 40 years, where she has worked with artistic directors Adrian Hall, Richard Jenkins, Amanda Dehnert, Oskar Eustis, and Curt Columbus. She has choreographed The Music Man, Annie, West Side Story, The Fantasticks, The Mystery of Edwin Drood, Cabaret, Camelot and Oliver!. Sharon spent 20 years as the dance director at Hope Arts Magnet School in Providence, 15 years as a dance specialist with the RI State Council on the Arts, 10 years as a dancer with RI Dance Rep, and 10 years as choreographer for The Arabella Project. In addition to her work at Trinity Rep, she has worked at Long Wharf Theatre, Arena Stage, Hartford Stage, Center Stage, South Coast Rep and was the choreographer for Paramount Pictures feature School Ties.