“We Hold These Truths”

When the lights first illuminate the stage for the opening act of We Hold These Truths now playing at the Lyric Stage, Michael Hisamoto in the role of Gordon Hirabayashi is sitting in a chair facing the audience. There is a very long pause before he begins to speak. This creates an expectation that what we are about to hear from Mr. Hirabayashi is going to be very important. In fact, not only what develops on the stage is important, it is also deeply moving.

The story based on the real life Hirabayashi is about an American citizen of Japanese ancestry who had the courage to stand up to his government during the onset of WWII when citizens were being rounded up and placed into internment camps while being denied the due process afforded them by the Constitution. That they were denied their rights solely because of their ancestry is a frightening tale. Most of these citizens, and it must be remembered that these people were American citizens, also lost their homes, furnishings, and businesses. Some had relatives who at the same time were in the military defending the nation, and yes, its Constitution.

Michael Hisamoto commands the stage for a little over 100 minutes portraying a man who is both charming and steadfastly determined. Playwright Jeanne Sakata has included much humor in her work which makes this tragic story bearable. Using this humor, Mr. Hisamoto, with his infectious smile, is able to break the tension when it begins to overwhelm while at the same time using his eyes to covey the steely determination of his character. Make no mistake, Gordon Hirabayashi, though good natured, is tough as nails. And, as he points out using a Japanese proverb his mother taught him, “The nail that sticks out is the one that gets hit.”

Mr. Hisamoto plays all the characters with the exception of those that are voiced from off stage. He is accompanied by three kurogos, characters from Japanese theatre whose faces  are fully covered and do not speak on their own. The kurogos move about while Hisamoto voices their lines. The use of lighting cast onto a minimally furnished stage along with some projections on the back wall and subtle mood music is all wonderfully effective. Director Benny Sato Ambush has done a masterful job.

As I watched We Hold These Truths I thought about the temptation to slip into feelings of self-righteousness as I felt a bond with Mr. Hirabayashi, but would I have felt the same way if I were there in 1942 after the attack on Pearl Harbor? I would like to think I would have been, but it is easier looking back at this dreadful period with the emotions of the time removed.

What I did conclude was how important it is for our Constitution to be upheld by judges who will not be ruled by emotion or the temptation to legislate from the bench. In the Hirabayashi case, which he fought all the way to the Supreme Court where the justices ruled unanimously against him even though this was certainly a clear case of his due process being denied. The fact that there was little public support for these Americans who were being deprived of their rights should never have played into the judge’s decision, but it certainly did.

Michael Hisamoto’s stirring performance not only honors Mr. Hirabayashi, but is also a reminder that while we may look back and like to believe we would have stood up for this courageous man, we should test ourselves as to whether or not we would do the same today in different situations. In this age where so many look to the courts to create laws we have to ask ourselves if we are able to respect the process, and if we can support decisions we are not happy with but are what is dictated by the Constitution. If that process had been followed in 1942 we would not have seen so many of our fellow Americans treated in such a shameful way.

I urge you to see We Hold These Truths and watch it with your eyes wide open. It is an important work, and one that should cause you to reflect no matter where on the political spectrum you fall.

Hold These Truths is the true story of Gordon Hirabayashi, the American son of Japanese immigrants, who resisted internment during World War II, a policy which continues to be cited and debated today.  Michael Hisamoto (Stage Kiss) plays Hirabayashi, a college student and a Quaker, whose hope and unquenchable patriotism over 50 years will leave audiences cheering.  The theatricality of this production will be enhanced by the addition of three kurogos, stage assistants/dancers who make magic happen in the Kabuki tradition.

Sarah Ruhl’s Stage Kiss now playing at the Lyric Stage is two plays within a play that centers on the problems that arise when former lovers are cast opposite each other in a revival of a 1930s melodrama, The Last Kiss, which is also about two former lovers.

Make no mistake, this play is very funny.

He (Alexander Platt) and She (Celeste Oliva) the former lovers who haven’t seen each other in over ten years are brought together when trying out for roles in a revival of a 1930s Noel Coward style play The Last Kiss. Sexual tension immediately arises as old passions become inflamed. She, who is now married and has a daughter while He is in a relationship with a woman from either Iowa or Illinois (you’ll understand when you see it), don’t take long to act on their desires. 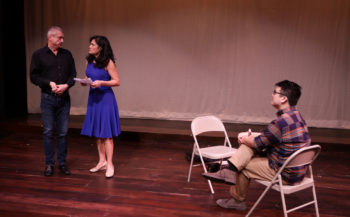 Make no mistake, this play is very funny. Ms Oliva, as She, is a positive riot as she reads for the part in front of director Adrian Schwalbach (Will McGarrahan). It is her first time trying out for a production in years and Oliva plays the part with a frenetic humor that conveys She’s self doubt. I couldn’t help but think this might not be much of an exaggeration of what many actors have been through. Mr. McGarrahan as Schwalbach is the perfect straight man. His timing is excellent as he knows just when to deliver a line or a look to allow the lines to sink in. I have seen him in a number of productions and he as yet to disappoint.

He is played by Alexander Platt. He, shallow and self centered, lives just in the moment. He seems not at all concerned with the fact that She is married and has a child. At first this doesn’t seem important as the laughs keep coming and it is amazing to see the set for The Last Kiss come together as the action moves along. The play begins with an almost bare stage that evolves into a beautiful setting with lovely costumes. It is magical to see as it happens bit by bit while the lights are dimmed.

Director Courtney O’Connor also plays a bit with the audience on when intermission is about to start. It is all fun and a nice touch.

In Act II things begin to falter a bit. The Last Kiss has been a flop and now He and She are teaming up with Adrian in a new play he has written and is producing in Detroit. She has left her husband Harrison (Craig Matthers) and her daughter Angela (Theresa Nguyen) to be with He. He’s former girlfriend Laurie (Gillian Mackay-Smith) and Harrison have taken up with each other. Angela’s reaction to all of this is not hurt but anger that doesn’t seem all that real. She also seems quite self centered.

And this is why things don’t quite work in the second act. While there are plenty of funny situations, we are still seeing a marriage torn apart and a child whose mother has walked out on her. I never got the sense anybody really was feeling much pain about all that had happened. Towards the end Craig Mathers gives a very moving and well done monologue about marriage that feels out of place as he appears to be the only one who grasps what has really happened. The lines he delivers include “Marriage is about repetition. Every night the sun goes down and the moon comes up and you have another chance to be good. Romance is not about repetition.” Beautiful words, and while She does go back with him, I don’t believe it is the words that have moved her. Her shallowness still rings through. Without an emotional investment in the characters it is hard to feel much even when listening to these lovely words so well delivered by Mr. Mathers.

Now, I do have to say something here about Michael Hisamoto who plays a number of parts including the Kevin the understudy in The Last Kiss and a pimp in the play in Detroit. Mr. Hisamoto almost steals this production. He is positively hilarious in his scenes with Ms Oliva in Act 1. Their kissing scene is side splitting funny. Every time he steps onto the stage you can feel his energy. His presence is subtle but very strong. He can elicit laughter with just a sidewards glance. He is a very talented young actor and I hope we get to see more of him soon.

Stage Kiss may have some flaws, but it is still a production worth seeing. It is refreshing to sit in a theater and laugh. It is nice in this very heated political era to be able to step away from all the arguing and be able to escape for a couple of hours. Theatre plays many roles in our society. Some of it is political. But it is also important that it gives us a break from the anxieties that creep into our lives. Stage Kiss does that.