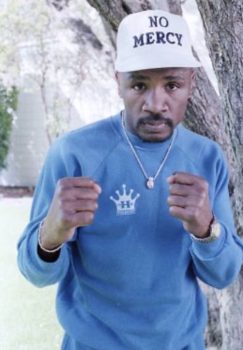 Last Saturday night I was logging onto the internet to check my email when I saw on the newsfeed the headline “Marvin Hagler, Former Middleweight Champion, Has Died”. It couldn’t be true I thought. The story said his wife Kay had posted the news on Marvin’s Facebook Page. Knowing the unreliability of social media and how rife for rumors it is I assumed some person with a sick mind had started the rumor and things would be cleared up soon.

Unfortunately, I was wrong. Soon, other media sources also reported the story. The Champ had died unexpectedly at, or near, his home in Bartlett, New Hampshire. The indestructible Marvelous Marvin Hagler, winner of 62 fights with 52 knock outs was gone. He was only 66 years old and appeared fit enough to still go fifteen rounds at a moments notice. It just couldn’t be.

In 1967 Marvin’s mother moved the family from Newark, NJ to Brockton, MA. Newark had been torn by riots and she wanted a better life for her children. Soon after settling in Brockton Marvin found the Petronelli’s gym and began a career in boxing that would take him to the National A.A.U. Championship and then onto to a spectacular professional career culminating in winning the World Middleweight Championship.

The road to the title was not an easy one. Hagler had a few strikes against him when it came to his quest for a title shot. He lacked connections, he was very good and he was a southpaw. Those at the top avoided him at all costs.

Another thing about Hagler; he was never satisfied. No matter how much he improved he believed he could be better and he kept working at it.

But Marvin had another quality, he was determined and unrelenting. He knew he would be champion some day and he kept working at it. Rising early mornings he would do his roadwork. After finishing running he would spend the day working his job at roofing and construction. Evenings he would be in the gym working to perfect his technique. Another thing about Hagler; he was never satisfied. No matter how much he improved he believed he could be better and he kept working at it.

Fighting for short money Marvin took on the likes of Bennie Briscoe, Willie Monroe, Bobby Watts, Eugene Cyclone Hart, Kevin Finnegan, Mike Colbert, Doug Demmings, Sugar Ray Seales, and Johnny Baldwin. He lost only two times and in both those cases he returned to decisively beat his opponent. And remember, this was all before becoming champion.

It wasn’t until his 49th bout and after six years of fighting that he finally landed a title shot. On November 30, 1979 he got his chance against Champion Vito Antuofermo. After fifteen rounds it appeared to all who had seen the fight that Marvin had won the crown. Unfortunately, two out of the three judges did not see it that way and the fight was ruled a draw allowing Vito to retain the title.

Hagler was crushed but he did not let it stop him. He went on to rack up three more wins and then challenged Alan Minter for the title in London, Minter’s home town. Alan had previously won the championship from Antuofermo.

Marvin did not leave it to the judges this time. He destroyed Minter inside of three rounds. Finally, the title was his, but he was not allowed to celebrate. The British fans rioted and Hagler was lucky to get out of the ring without being injured or worse. He was denied the joy of being presented with the championship belt in the ring.

Marvin would go on to successfully defend the title 12 times with only one challenger, Roberto Duran, going the distance with him. To say he was dominant would be an understatement. He had no soft touches in his title defenses. He took on the best and showed what a true champion was made out of.

It was in his thirteenth defense that he agreed to fight Sugar Ray Leonard. Leonard’s career was everything Marvin’s was not when it came to getting breaks. His first pro fight was a televised main event. He made money from day one and was carefully guided to the championship, and he was a media darling. He had retired three years earlier but decided to make a comeback when he perceived Hagler was starting to show signs of slowing down a bit.

The fight was held in La Vegas, the site of the robbery in Marvin’s challenge to Antuofermo. The terms were all set in Leonard’s favor, from the location, to having a large ring, to the distance of the fight being reduced from 15 to 12 rounds. In spite of all this and with Marvin coming off wars in his two previous fights, against Hearns and Mugabi, he appeared to have won the fight. But once again two of the three judges did not see it that way and Leonard was given the decision and the title.

Again, Marvin was crushed by this theft. The title had been stolen from him. It was believed that he would come back and fight Leonard again, but Leonard did not immediately agree to a rematch. He decided he would leave Marvin dangling. However, Hagler did something not expected and very wise; he walked away from the game. He knew he had defeated Leonard. He had accomplished everything he set out to do in boxing. He had to do it all the hard way, but Marvin knew how to work hard. He left the sport with his head high and his mind intact and a healthy bank account. Not many do.

The adjustment to a life away from boxing was at first a bit rocky, but after some struggles and a divorce Marvin found his stride, He moved to Italy where he made movies. He remarried and bought a second home in the quiet town of Bartlett, New Hampshire. The intensity with which he had to live and fight for so many years was now in the past. Watching interviews with him that were done in recent years you see a content man. He had no demons haunting. He was happily married to his wife Kay for thirty years and they had a great life together. They traveled extensively making personal appearances. The fans still admired him.

Marvin was truly the last of the great throwback fighters. He was without a doubt an all time great. He could have fought in any era and been champion. While it can be argued that some of the greats of the past could have beaten him, it cannot be said for certain that any of them would have.

Marvin Hagler was also a throwback in another sense. He never gave up his dignity, he was always classy and decent. Hagler never let setbacks keep him down, nor did he ever embrace a victim mentality , a way of thinking that is so common today. He was able to channel his disappointments and anger into positive forces that contributed to his successes. I doubt his like will ever be seen again, and we are the lesser because of it.

Rest In Peace Champ. You were taken too soon and will be missed.