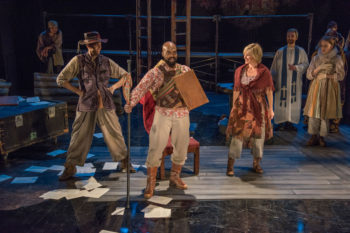 “It has become a New Rep tradition during the holiday season to present a play that invites audiences of all ages to revel in this celebratory time of year,” says Artistic Director Jim Petosa. “This year we dream the impossible dream as we present the Tony-award winning musical Man of La Mancha. This classic musical adventure recounts the boundlessly idealistic tale of Don Quixote, epitomizing our season’s theme of resilience. We’re thrilled to bring this spirited revival to New Rep this winter.”

“New Rep is pleased to welcome so many new faces to our stage for our holiday production of Man of La Mancha,“says Managing Director Harriet Sheets. “Besides those joining us for the first time, we welcome back director Antonio Ocampo-Guzman and long-time collaborator Maurice Emmanuel Parent in the role of Don Quixote. Maurice’s presence on our stage over the years has been a highlight of many seasons, so we’re excited that he’s able to join us once again in this starring role.”

Tickets may be purchased by calling the New Rep Box Office at 617-923-8487 or visiting newrep.org.