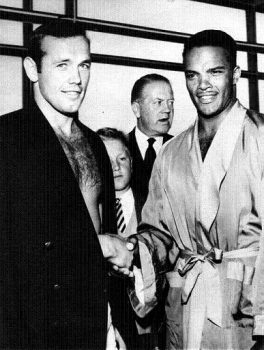 In 1958 Eddie Machen was the leading contender for the heavyweight championship held by Floyd Patterson. Machen was undefeated and held victories over such men as Joey Maxim (twice), Nino Valdes, Bob Baker, and Tommy Jackson. Of course, having a strong claim to a title shot during the reign of Floyd Patterson was a sure way of never receiving one. The leading contenders of the day were routinely bypassed in favor of inferior opposition.

While the top contenders included men named Liston, Valdes, Pastrano, and Folley, Patterson’s manager Cus D’Amato opted instead for bouts with the likes of unranked Roy Harris, Pete Rademacher (he was making his pro debut in his title shot), Brian London (whose ticket to Floyd was a loss to a young Henry Cooper), and Tommy Jackson (Floyd had already defeated him before becoming champion). It was truly a dark time for the heavyweight championship.

Meanwhile, over in Sweden a young star was making some waves. His name was Ingemar Johansson and he was undefeated. Ingo was scoring knockouts with a lethal right hand that was known as “Ingo’s Toonder”. His record was impressive but not his opposition. He had won the European Heavyweight Championship when he kayoed Franco Cavicchi in the 13th round. 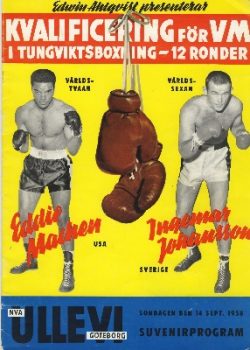 His other notable wins were a 10 round decision over Brit Joe Bygraves, a one round kayo of Hein Ten Hoff, a 5th round knockout of Henry Cooper, and a decision win over American Archie McBride. None of these opponents were near the quality of Machen, Liston, or Folley. Also, Ingemar had not been seen by fans in the U.S., so he was truly an unknown quantity. On top of this, ever since Tommy Farr had given Joe Louis a very tough go of it in his title challenge, European Heavyweights had not been taken seriously.

What happens next in the heavyweight division is something that is worth looking into. It is 1958 and we have Eddie Machen as the top contender. He is undefeated in 24 fights with 15 knockouts. In any other era he would have received a well deserved title shot. But the title is now controlled by D’Amato and he is having nothing to do with signing Floyd to fight a serious opponent. Machen now signs to fight number two contender Zora Folley, another deserving contender. The two fight to a draw. Meanwhile, Patterson bypasses both men and takes on Harris and London instead. A disgrace.

After the Folley fight Machen is offered a match against Ingemar Johansson in Sweden. The fight doesn’t make any sense for Eddie other than it would be a decent payday, but number one contenders do not look for decent paydays, as the ultimate payday is winning the crown. Why would he take on an unknown quantity such as Johansson in Ingo’s home town and risk everything, while having nothing to gain?

For years it was thought Machen took a dive in the fight. When I was young that was the word among all the knowledgable fight people. The story was that D’Amato’s people, and he had some very shady people around him, had told Machen that if he lost to Johansson they would guarantee him a title shot later on. This was not unprecedented. Jake LaMotta had agreed to such a deal when he fought Billy Fox. He threw the fight and did get a title shot in return.

Why would D’Amato want Ingo to win? In Ingo he saw the potential for a big draw with little risk of Floyd losing. He had heard Johansson was another slow moving European heavyweight who would pose no threat to Floyd. His undefeated record would make good copy for publicity, and a win over Machen would give him number one contender status, a status none of Floyd’s previous challengers had ever come near to having.

The story gets really interesting here. Machen travels to Gothenburg and is knocked out in one round. Word in the States is Eddie took a dive. Movies of the fight were not distributed here so the rumors were easy to believe. It wasn’t until decades later that footage of the bout made its way to the U.S. 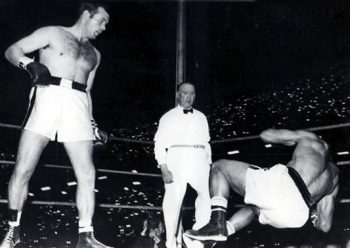 Looking at the film you see that not only did Ingemar legitimately kayo Machen, he nearly killed him. At the opening bell both fighters came out tentatively. Machen was standing straight up in a classic boxer’s stance throwing left jabs. Johansson was moving very quickly on his feet and circling Eddie while pawing with his left jab. About a minute into the fight, Ingo landed a tremendous right hand that dropped Machen. Eddie struggled to his feet and was dropped again by an Ingo right. He went down hard but managed to get to his feet. The fight should have been stopped here, but the “courageous” referee let it continue. Machen was driven to a corner and sank half way down while Johansson pummeled him mercilessly. The referee stood idly by. Finally, Machen fell to the canvas unconscious. It was as brutal a knock out as you will see. 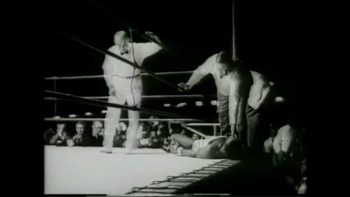 It looks as if this proves the fight was not fixed, right? Well, no. The fight could have been fixed and at the same time Johansson could have legitimately knocked out Machen. You see, Eddie would have been planning on losing a ten round decision. He would fulfill his end of the bargain and eventually get a title shot, though I very much doubt that would have happened. At the same time, Ingo proved to be much better than anyone believed and he was too much for Machen. His Toonder was the real thing. It ends up Machen ws knocked out before he could throw the fight.

Now, another question arises. If D’Amato was so hell bent on avoiding serious competition for Floyd, why would he now agree to have him defend against Johansson? Not only did Ingemar prove he could fight, he also showed he had one of the hardest right hands in heavyweight history. Cus would have taken Floyd and run for the hills to get away from him. If things had followed their usual M.O. it would have been Machen who would have been more likely to get a title shot after having been destroyed.

I believe D’Amato never saw a film of the Machen v Johansson bout. He believed Machen lost as planned, though made his exit sooner than expected, and still figured Ingemar was an inferior opponent. Looking at how Cus managed Patterson it makes no sense he would have signed to fight Johasson after what he did to Machen. This was one time when Cus outsmarted himself, as Ingo took the title from Floyd in his next fight. Not only did he win the title but he destroyed Patterson in much the way he did Machen, only in this bout it ended in the third round.

There is one final question that begs to be answered. If Machen was going to take a dive anyway, why didn’t he just stay down after the first knockdown? That’s easy to answer. Eddie was a pro with tremendous heart. He was seriously hurt when he went down the first time. It is likely he no longer knew where he was and began fighting on instinct, and his instincts were those of a courageous fighter. If you look at the film of the fight you will see Machen sitting in his corner after being stopped. He is seen mouthing the words “What Happened?” When his seconds respond you can read his lips again and see him saying “Really?”

And what did really happen? We’ll never know for sure, but I think the evidence backs up my theory.