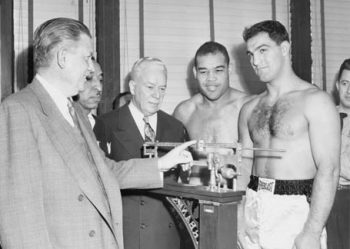 Rocky Marciano cried the night he knocked out Joe Louis. Louis had retried in 1948 after defending his title against Jersey Joe Walcott. Joe stopped Walcott in the 11th round. Seven months earlier Louis had won a controversial 15 round decision from Jersey Joe, so winning decisively was a great way to cap off his career and make a dignified exit.

Unfortunately, money problems forced Louis to embark on a comeback. He had a huge outstanding debt with the IRS, and the only way he knew how to make money was by stepping back into the ring. His first bout back after a two year layoff was against Ezzard Charles in an effort to regain the crown now held by the Cincinnati Cobra. After 15 brutal rounds Charles prevailed by earning a unanimous decision.

That fight did not earn Joe the money he needed to pay off his debts, so he continued fighting in the hope of getting another shot at the title. Louis fought often over the next year engaging in 8 fights with 8 wins. He still flashed signs of greatness, but it was clear his reflexes had slowed. At 36 years of age and after a lifetime of hard training his body was just worn down. On top of this, even with fighting so often, he could not earn enough money to pay off his debt. The interest kept compounding, and he was up against a tide that would not recede.

His bout against Rocky Marciano, which took place on October 26, 1951, was a classic match of the young up and coming star versus the fading veteran. It’s a script that has played out many times, but in this case it was cloaked in sadness. Joe Louis was well loved by the public. Everyone knew that he would rather have been enjoying a richly deserved retirement but had no choice other than to fight. So it came to be that a man who was arguably the greatest heavyweight who ever lived would face a future great.

Even after all of these years it is still painful to watch the footage of that October night 67 years ago at Madison Square Garden.

Even after all of these years it is still painful to watch the footage of that October night 67 years ago at Madison Square Garden. Louis, now 37 years of age, entered the ring a 6 to 5 betting favorite against the unbeaten Brockton Blockbuster. Many felt experience would win out over youth, but the years had caught up to Joe.

When the bell rang for the first round a balding Joe Louis moved out in his classic stance. Rocky came out very aggressively and won the first two rounds big, landing numerous overhand rights that Joe just could not avoid. He had not been hit like this since his first fight against Max Schmeling in 1936, 15 years earlier. 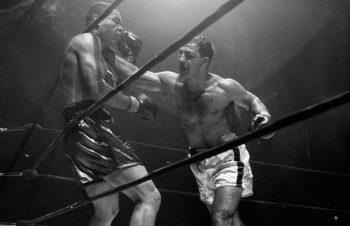 It is a testament to Louis’s championship heart that he was able to become competitive against his younger opponent when he won the 4th and 5th rounds. Even though he took those rounds it was obvious he was a shadow of his old self. He was throwing combinations but his punches were not firing off like they used to. It was taking just that much longer for his body to respond to what his brain was telling it. While Joe outweighed Rocky by nearly thirty pounds he could not keep the younger man off of him. The fifth round would be the last round Joe would win in his career.

In the sixth round you can see how Joe’s legs appeared stiff. He lost the bend in his knees and could not move away from Rocky. There was no spring in his legs. At this point he began to take an awful beating. Rocky was landing rights to the head while punishing Joe’s body. It was just a matter of time before the end.  Suddenly, Joe became an old man. Boxing is a cruel sport where old age strikes early. 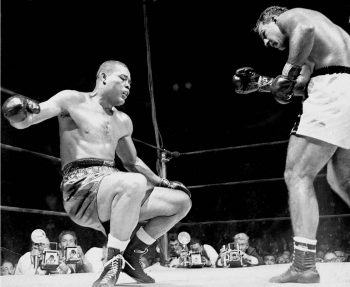 When the bell rang for the 8th round an exhausted and bruised Louis stepped forward slowly. He was not only worn out from the blows of Marciano, but also from the years of fighting and training. Louis had been fighting professionally since 1934 and as an amateur before that. He had always trained hard and he had fought often, only taking time out to serve his country during WW II. He had never failed to give his all and was doing it again on this night. However, his tank was now empty and his opponent was relentless.

About a minute and a half into the round Marciano floored Louis with a short and powerful left hook. Louis stayed on one knee while taking an eight count. When Joe rose Rocky went in to end the fight. He backed Louis up to the ropes and landed two left hooks. After the second hook, Louis’s hands dropped to his side and Marciano landed a right that drove Louis down and through the ropes. As he landed on his back members of the press sitting at ringside reached up to help him. You can see the look of sadness on their faces. A police officer jumped onto the ring apron. Cornermen and the ring doctor rushed to him and made a protective circle around the fallen champ. There was a sudden outpouring of grief that can still be felt while watching the old black and white footage. The scene made me think of a line from Shakespeare’s Richard II, “For God’s sake, let us sit upon the ground and tell sad tales of the death of kings”.

As you look at Rocky’s face as they announce him the victor, you see no joy. It has been reported Marciano wept in his dressing room. He said to Louis, “I’m sorry Joe”. Joe responded “What’s the use of crying? The better man won. I guess everything happens for the best.”

Joe Louis would retire for good after this fight, but his financial problems continued. He turned to professional wrestling for a time and did some refereeing. He eventually ended up working as a greeter in Las Vegas. While his life didn’t turn out the way it should have, he never lost the love and admiration of the American people. He was buried in Arlington National Cemetery, a fitting tribute to a man who gave so much to his country.

Rocky Marciano went on to win the championship and retired undefeated. The Rock remained retired, being one of the few who was not lured back into the ring. Tragically, he died in a plane crash in 1969 at the age of 45.

Joe Louis and Rocky Marciano were two of the greatest heavyweight champions. Both displayed class and dignity in and out of the ring. That class was displayed by each man when they met in the ring. If you want a lesson in how to be a good winner, how to be a good loser, just follow their example.