Leonard Nimoy, who was born and raised in Boston’s West End, passed away recently. While Mr. Nimoy was never a boxer, and is best known for his role as Mr. Spock in the Star Trek TV series and movies, boxing did have a part in shaping his acting career.

I was never a big fan of Star Trek, but I have always found Leonard Nimoy to be a very fascinating man outside of the role he is famous for. He led a very interesting life and was active in many different art forms. Not only was he a TV and movie star, he also spent time on stage, was an accomplished photographer, poet, narrator, and even released a record album.

I recently viewed a 2014 documentary, “Leonard Nimoy’s Boston”, his son Adam made about him. Mr. Nimoy and Adam spend time reminiscing and walking through the areas of Boston where Leonard grew up. The stories are wonderful to listen to, (tales of selling newspapers, working for a vacuum cleaner dealer, and selling greeting cards), and it brings us back to a very different Boston then the one we know now, before urban renewal destroyed a vibrant neighborhood and displaced many poor but happy families.

The old West End was a lively neighborhood where many immigrants first settled when they came to this country. Leonard’s parents arrived here from Ukraine and were Jewish. There were many Jews in the area and also a huge population of Italians plus many other ethnic groups. The West End was a beautiful representation of the American Melting Pot.

The Nimoys lived at 87 Chambers Street, which has since been covered over by the Charles River Park luxury apartments. Three doors down from their building was a synagogue where the Nimoys would worship. The only remaining Jewish House of Worship from that period is the Vilna Shul on Phillips Street . A number of years ago Leonard Nimoy narrated a documentary about the Vilna Shul in an effort to raise money to restore and preserve it. Towards the end of the film the camera zooms in briefly on a golden pair of hands that appear to be giving the Vulcan sign of greeting. Mr. Nimoy in interviews has said that it was his memories of seeing this ancient symbol while worshipping that gave him idea for it in the Star Trek series. He remembered seeing worshipers using it while he was at the synagogue and thought it was a beautiful gesture, and seeing that Earthlings of all backgrounds make some gesture towards each other when first meeting, be it a handshake, bow, salute, or something else, he thought it would be fitting for Vulcans to have such a thing. I believe it was in a Boston synagogue that the young “Spock” first saw this, so I think Boston can take some credit for what has become a gesture of peace known throughout the galaxies.

Leonard got his first taste of acting at the Elizabeth Peabody Community Settlement House at 357 Charles St. While there he was spotted by a priest who was so impressed with his talent that he offered to fund 50% of a scholarship for him to attend a summer acting program at Boston College, and offer the young Nimoy jumped at. It would take years before he found success in the world of acting. While working to get by he tells the story of the time he was driving a cab in California when a young Jack Kennedy hailed him. They had a wonderful conversation in which they compared the commonalities in politics and acting. Kennedy told him that while there were many competing for leading r 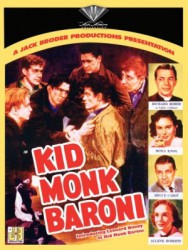 oles in both professions, “There was always room for one more good one.”

So, where does boxing fit into all of this? Well, it turns out the first major film role Mr. Nimoy had was as a boxer in the movie “Kid Monk Baroni”. I watched the movie recently and it is pretty good. The future Mr. Spock plays the lead role of Monk Baroni, an angry young man with a disfigured face who finds an outlet for his anger in the boxing ring. It is appropriate that a priest leads him in this direction as that mirrors his journey to acting in his own life. The movie follows the usual boxing movie formula with the leading man finding success in the ring and love outside of it only to squander both but to be led back to a good and meaningful life by his friends who never lose faith in him. Jack Larson, who portrayed Jimmy Olsen in the Superman TV series, plays Monk’s best friend Angelo. 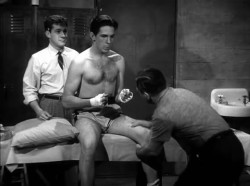 Bruce Cabot is Monk’s manager Mr. Hellman. Cabot is best remembered for his role in the original King Kong with Fay Wray. The entire movie was filmed in nine days and Mr. Nimoy was paid less then a thousand dollars for the part. It did receive decent reviews and was shown at the Bowdoin Square Movie House where the marquee proudly proclaimed “The West End’s Own Leonard Nimoy Starring in Kid Monk Baroni”. 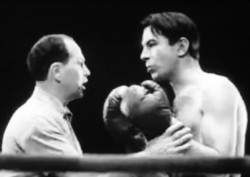 . Nimoy has said that the role did not lead to fame and fortune, it would be many more years before that happened, but it did something very important for him. He said it gave him the confidence that he could do the work. This confidence would serve to motivate him to keep sticking with it until he finally made it. He had the determination of a championship boxer. Oh, and he also showed some good footwork and hand movement in the movie. I have not been able to find out if he ever actually spent any time in the ring outside of the movie, but he certainly showed ability in the scenes I saw.

In 2012 Mr. Nimoy was given an honorary degree by Boston University. In his speech he said to the graduates, “You are the creators and curators of your own life and work. Give us your best. We crave it, we hunger for it.” Leonard Nimoy always gave us his best and we are all the better for it.