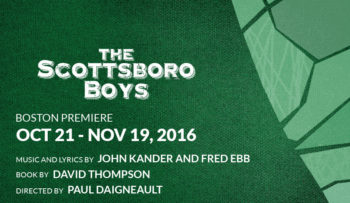 The musical, with a book by David Thompson, and which was originally directed and choreographed by Susan Stroman, brings to light the shocking true story of nine African-American teenagers jailed in Alabama in 1931 for a crime they did not commit. With an exhilarating and infectious score that mixes gospel, jazz, and vaudeville, THE SCOTTSOBORO BOYS flips the script on the classic minstrel show to lay bare the fateful case that inspired the American civil rights movement.

THE SCOTTSBORO BOYS was the final collaboration for Kander and Ebb

Nominated for 12 Tony Awards, THE SCOTTSBORO BOYS was the final collaboration for Kander and Ebb, whose works include such musical theatre classics as Cabaret, Chicago, and Kiss of the Spider Woman.

SpeakEasy Founder and Producing Artistic Director Paul Daigneault will direct the New England premiere of THE SCOTTSBORO BOYS. Winner of the 2014 Elliot Norton Award for Sustained Excellence, Mr. Daigneault’s SpeakEasy directing credits include productions of Significant Other, Violet, Mothers & Sons, Big Fish, The Color Purple, In the Heights, and Next to Normal.

THE SCOTTSBORO BOYS will run for five weeks, from October 21 through November 20, in the Roberts Studio Theatre in the Stanford Calderwood Pavilion at the Boston Center for the Arts, 527 Tremont Street in Boston’s South End.