Held A Prime Joe Louis To A Fifteen Round Split Decision

In 1937 Joe Louis won the World Heavyweight Championship from James J. Braddock. Over the next 12 years he defended the title 26 times, a record. Of those 26 defenses only three went the full 15 round distance, and out of the three opponents who took him to the closing bell, two were kayoed in rematches. The third, Tommy Farr, only fought Joe once.

Farr is remembered for the courageous and tough battle he put up against Joe. There have been some who have said he deserved the decision, but that is not true. In Tommy’s own account of the fight he said Louis clearly beat him. Unfortunately, Farr never got a rematch and the big payday it would have brought him. Louis was willing, and actually wanted to fight him again, but as I have written in an earlier column, the sleazy people who populate boxing sabotaged Tommy’s shot. Most notably, Joe Gould who took over his management in the United States.

In Joe’s last two title defenses he fought Jersey Joe Walcott. In their first fight Walcott took Louis the entire fifteen rounds decking the champion on the way to losing a split decision. In the rematch Louis kayoed Walcott in the 11th round and then retired after the fight.

There was one other man who managed to take Louis the fifteen round route. This man also was the only man other than Walcott to hold Joe to a split decision. While the Louis that Walcott faced was nearing the end of his career and was past his prime, the man who gave the champ such a difficult time of it did so in 1940 when Joe was at the peak of his career.

Oddly, out of the three men who took Louis the distance this man is the least remembered. His name was Arturo Godoy and he was quite the fighter.

Godoy was a seasoned veteran when he fought Louis. Hailing from Chile, Arturo had a long run and was fighting his 71st fight when he stepped in to challenge for the title. with two wins over Tony Galento as well as victories over Luis Firpo, Jack Roper, and Tommy Loughran, Godoy had a reputation for being a tough customer. He also was extremely strong and had a very unorthodox style. This combined with unending stamina made him a force to be reckoned with.

When the fight was announced it was not considered to be a difficult one for the champion. It was held at Madison Square Garden on February 9, 1940 before a crowd of 15,567 people. What that crowd got to see was a fight that wasn’t pretty to look at but turned out to be Louis’s toughest challenge up to that point. 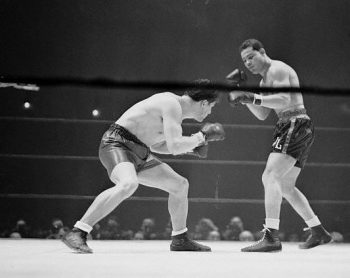 Godoy fought from a very, very low crouch while crowding Joe and not giving him punching room. At times Arturo crouched so low that he was practically sitting on the canvas. It is no secret Louis had trouble with opponents who fought out of a crouch. Max Schmeling had kayoed hims a few years earlier fighting in that way, and Tony Galento had decked him when he threw a left hook from a crouch.

At the end of 15 rounds the scorecards were announced and the decision was split with Joe coming out on top. The referee and one judge had it in Joe’s favor 10-5 and 10-4 respectively white the other judge had Arturo on top by 5-10. United Press saw it as a draw. The crowd booed the decision, but that may have been more about the poor performance from Louis as it was from the feeling that Godoy actually won.

No matter the fairness of the decision, the fact is Godoy gave Joe a very tough night. So, why is this bout not remembered in the way the Farr fight is? Well, for one thing, Joe never fought Tommy again while he stepped right back into the ring with Arturo just four months later. Louis called the first Godoy fight “The worst fight I ever had”, and he wanted to show he was better than how he performed that February evening.

One thing about Louis, he always performed better in rematches, and the Godoy fight was no exception. Joe and trainer Jack Blackburn went to work in the gym and came up with a strategy for dealing with Godoy’s awkward style, and when the bell rang at Yankee Stadium on June 20, 1940 before a crowd of 27, 286 fans it was a different Joe Louis who came out against the challenger.

Employing a lethal right uppercut and keeping his punches very short and inside, Joe went to work busting up the game Chilean challenger. By the 8th round Godoy’s face looked like what the Associated Press called “barbecued beef”. Godoy had been dropped once near the end of the 7th round and again twice in the 8th before the referee called a halt to the carnage. Godoy tried to push past the referee and continue fighting and had to be restrained, but then went over and congratulated Louis. After the fight Joe said “That’s the worse beating I ever gave a man”.

So, to answer the question of why Arturo is not remembered in the way Tommy Farr is for his galant 15 round go against Joe Louis is because Farr never fought Joe again so, as most likely would have happened, he did not get kayoed by him. While Joe got revenge on Arturo just 4 months later and proved beyond a doubt who the superior fighter was.

Never the less, Godoy deserves to be remembered for the incredible battle he gave Joe Louis on a February night in 1940. He was the only man to take the prime Louis fifteen rounds to a split decision, and that was a monumental feat.

Godoy was a popular and exciting personality who lit up a room. He was well liked in the states and loved in Chile. I’m sure Joe Louis never forgot him.