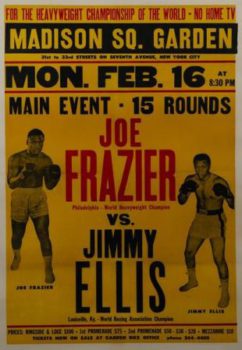 It was 1970 and Muhammad Ali was still in boxing exile. Ali had been deprived of a license to box by the commissions in all fifty states. The Ring Magazine continued to recognize Ali as the champion arguing a title can only change hands in the ring.

Meanwhile, two other fighters laid claim to a portion of the title. the argument being since Ali could not fight they were deprived of a shot at the championship. In 1967 the WBA sponsored a tournament to find a successor to Ali. Joe Frazier was invited to participate but declined. Jimmy Ellis did take part though he was considered a long shot at winning. He proved the pundits wrong when he went on to win the tournament by defeating Leotis Martin, Oscar Bonavena, and Jerry Quarry. If memory serves me right, Jimmy was the underdog in all three fights.

Frazier went on to win his share of the title with a knock out win over Buster Mathis. Joe’s portion of the crown was sanctioned by the New York State Athletic Commission and a few other governing bodies.

Five months after winning the WBA title Jimmy Ellis traveled to Sweden to defend it against Floyd Patterson. Patterson had taken part in the original tournament but lost a close decision to Jerry Quarry in a semi final match. Ellis, fighting with a broken nose sustained in the first round, won a hard fought 15 round decision over the former two time champion. Because of the damage to his nose Jimmy had to take some time off. When he was better there were proposals for fights against Henry Cooper and Gregorio Peralta, but neither materialized.

The public, now not sure if Ali would ever return to the ring, began to clamor for a unification bout between Frazier and Ellis. You see, back then people were used to there being only one heavyweight champion at a time and having the title divided up just didn’t seem right.

At some point in late 1969 Ali had made a statement that he would never fight again. It was at this point Nat Fleischer, the editor at Ring Magazine, announced he would recognize the winner of an Ellis Frazier fight the undisputed champion.  Fleischer was the most respected voice in boxing and what he said carried a lot of meaning.

The bout was set for February 16, 1970 to take place at Madison Square Garden. As was the norm at the time it was to be a fifteen round affair, fifteen rounds or less. 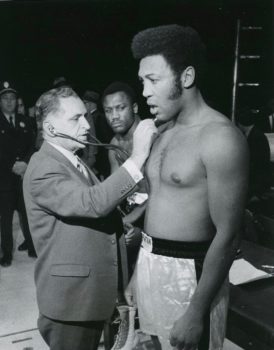 Ellis entered the ring weighing 201 pounds to Joe’s 206 pounds. This was the heaviest weight Jimmy had ever fought at. Frazier was a 6 to 1 favorite though many in the press gave Ellis a very good chance at winning; after all, he had overcome the odds time and again. He also had something else going for him. Jimmy had tremendous power and speed in his right hand. He had dropped the iron jawed Bonavena twice with that punch. In two fights against Frazier lasting a total of 25 rounds Bonavena was never even staggered.

Both contestants entered the ring looking confident and fit. Ellis did look bigger than in previous encounters, but also looked strong. Frazier was lean and energized.

When the bell rang for the first round it was apparent what Ellis’s strategy was and why he came in at the heavier weight. Jimmy came out with a puncher’s stance. He feet were wider apart than usual, and even though he was moving, he was more setting himself up to be able to throw power shots as Joe came at him. 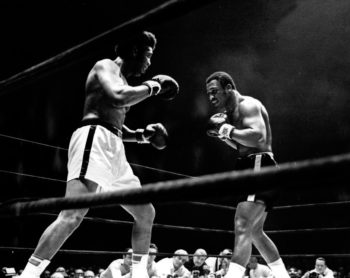 During that first round Ellis threw dynamite at the bobbing and weaving Frazier. Joe was hit on a number of occasions by the one/two combos Jimmy threw but none of the shots caught him squarely on the chin. While Ellis won the opening stanza Frazier had landed some telling left hooks to the body. Yank Durham, Joe’s trainer had taught his pupil years earlier the old boxing adage, “If you kill the body the head will die” and Joe learned the lesson well.

In the second round Frazier came out on fire. He was extremely aggressive and started crowding Jimmy. Ellis was able to tie him up but it took a lot of strength to do so. He was also taking more hooks to the body from Joe. It is also interesting to see Frazier throwing and landing the occasional left jab. 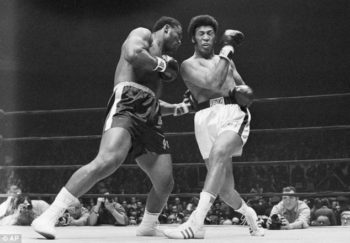 By round three Frazier was running on all cylinders. While Jimmy was still trying to land the one/two combos he was being kept busy just fending off Joe’s murderous assault. Frazier was firing off brutal combinations to the head and body. His attack was furious and by the end of the round Ellis had been staggered and his legs were very heavy.

Between rounds Jimmy was taking deep breaths while Joe looked like he had hardly broken a sweat.

The fourth round saw Frazier at his murderous best. Jimmy came out and immediately threw two right leads in a desperate attempt to turn the tide of battle. Frazier rolled under both of them and then went to work. He started with a vicious body attack and then moved to the head. At this point Ellis had lost the ability to move much on his legs. With about a minute left in the round Joe backed Jimmy up against the ropes and dropped him with a left hook. Ellis was up at nine and was now fighting on sheer courage. 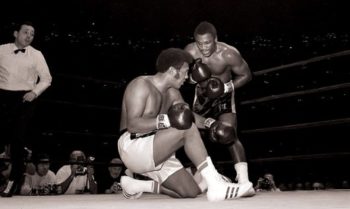 Jimmy was trying hard to land that one good punch but he had nothing left. As the fighters moved to mid ring Joe stepped to his right and unleashed a brutal left hook to Jimmy’s chin. Ellis went down flat in his back. As the referee, Tony Perez, counted over him the bell rang. By some miracle Ellis staggered to his feet and walked to his corner. It was at this point, against protests from Ellis, that Angelo Dundee called the fight off. It was the right and decent thing to do. Jimmy’s courage could have gotten him killed.

Frazier would go on to defend his title against Bob Foster and then Muhammad Ali. Jimmy Ellis would continue fighting taking on Ali and much later have a rematch with Frazier. He would never again fight for the title.