The Ring Was His Stage 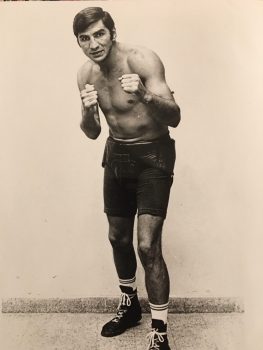 Argentina has not exported a lot of boxers, but the ones that have come from the land of Carnival have been very talented. In 1923 Lus Angel Firpo traveled to New York City to challenge Jack Dempsey for the heavyweight title. The Wild Bull of the Pampas was knocked out by Jack in the second round, but before being stopped he managed to knock Jack clean out of the ring.

All of these boxers were very skilled, with  Monzoon and Perez often mentioned as all time greats. Each of them either won or challenged for world titles.

Gregorio Peralta was another Argentine who knew his way around a boxing ring. Born in 1935, Goyo began boxing as an amateur while in the navy. He won numerous titles before turning pro in 1958. Gregorio was immediately a rising star and very popular. In his first 16 bouts he was only defeated once and that was by decision to Justo Benitez. He would go on to defeat Benitez three times.

In his 17th bout, Peralta was matched with Peruvian Mauro Mina. Mina was arguably the greatest fighter to come from South America. Goyo was stopped in the 8th round. This was only one of three times he was stopped in what would be a career that consisted of 116 fights. He went on to defeat Mina in a rematch, being one of only three men to beat Mina and the only one to defeat Mina in his prime.  His other stoppages were on cuts to Willie Pastrano in a title fight, and in the 10th round against George Foreman in their second fight. In almost 20 rounds against the much larger Foreman, Gregorio was never knocked off his feet.

Peralta had an educated left hand, that he put to good use while throwing jabs and hooks.

Gregorio Peralta was a very cagy boxer. He moved around the ring in a very relaxed fashion and used feints and head movement. Peralta had an educated left hand, that he put to good use while throwing jabs and hooks. He would often lead with the hook firing it from a straight up position similar to what Conn did in his first fight with Louis. Another tactic he used was to move in behind a jab and then step forward moving his right foot ahead of his left. This would put him into a southpaw stance for just a moment where he would unleash a combination. It was quite an effective strategy which he used in his first fight with Foreman. Always remaining loose, it was very difficult to hit him with a solid shot.

In 1963, after compiling a very solid record in South America, Peralta made his debut in the United States where he was matched against World Light Heavyweight Champion Wille Pastrano. The bout, held in Miami, was a non-title affair. Gregorio was very impressive while easily defeating Willie over ten rounds.

He would then go on to defeat top contender Wayne Thornton twice before getting another match with Pastrano, this time for the title. The fight was held in the champion’s home town of New Orleans, and there was some controversy over how it ended. Peralta was reportedly ahead on points when he was cut over his left eye. The referee stopped the bout at the end of the fifth round. Peralta’s manager claimed the referee, while examining the cut, used his fingers to make it worse. Gregorio never made any excuses for the loss, only saying he felt he could have gone on.

In his next 43 fights Peralta suffered only one loss (to heavyweight Oscar Bonavena) but never got another chance at the title. It was a case of being too talented for his own good. Though he had begun to grow out of the light heavyweight division, he never became a full fledged heavyweight. Today he would be a cruiserweight.

He and Bonavena fought to a draw in a rematch which led to talk of  getting a fight with then WBA Heavyweight Champion Jimmy Ellis. That certainly would have been an interesting fight and Goyo would have had a real shot at winning the title. Instead, he was matched with up and coming contender George Foreman. Big George had only 15 fights at the time, but was winning them in devastating fashion. He was also taller and heaver than Peralta.

On February 16, 1970, when Gregorio stepped into the ring to face Foreman, he looked more like an actor making his entrance onto the stage for a performance in a play by Shakespeare than a man about to engage in the most violent of sports. The Argentine with the movie star good looks had his hair carefully combed. He was calm and walked around the ring smiling. When introduced he took bows while holding his hand out. Maybe he thought he was at one of the Broadway Theaters. His performance after the bell rang that night would have certainly gotten him a Tony Award nomination as he put on a brilliant display of boxing skills.

Big George, as was his fashion back then, came out strong looking to end matters quickly. Goyo had other ideas and avoided Foreman’s charge like  a matador avoids a bull. For the first five rounds Peralta relied mostly on his left hand. He was not dancing away from George as much as he was taking steps around him. Gregorio would through quick hooks to the head and body and then clinch when things became dangerous, Peralta used his left hook and his switch to southpaw move to neutralize Foreman’s power. George was getting in good shots, many to the kidneys. Gregorio’s hooks to the body took some of the steam out of big George, but the future champ was still pounding away himself. In another nod to the stage, at the end of a number of rounds Peralta would take a bow and extend his arm out as if expecting an ovation for his performance. He deserved one.

In the fifth round Peralta opened a cut over George’s left eye. In the sixth round, Goyo started landing with his previously dormant right hand. It had turned into a very interesting fight, a classic between a wily old veteran and a powerful up and comer.

In the end, Peralta’s need to use defensive tactics to hold George off cost him the decision, though the crowd booed when Foreman was announced the winner. The decision was fair but the scoring was ridiculously one sided. It was a much closer fight than what the judge’s cards would have you believe. It was a marvelous performance by Peralta. It’s also a very interesting fight to watch.

The two would meet again seven months later, and this time Foreman would stop Peralta in the tenth round, but not before once again having difficulty with him.

Gregorio would continue campaigning as a heavyweight. He moved to Spain where he beat Jose Manuel Urtain and Gerhard Zech among others. There was talk of a fight with Muhammad Ali but that never materialized; however; the two did put on an exhibition match in Barcelona.

As his career was winding down Peralta dropped a decision to Ron Lyle, and in his last fight Goyo fought a draw with Lyle. That was in 1973.

Eventually, he moved back to Argentina where he ran for political office. A soft spoken yet charismatic man, he was well loved in his home country. His final record in the ring stands at 119 total bouts, 98 wins (60 knockouts), 9 losses (3 by stoppage), and 9 draws, a remarkable career. He was one of those fighters who would have easily been a world champion if the timing had been better, though I get the feeling he might have preferred a career on the stage.

Gregorio Peralta answered his final bell on October 3, 2001. He was only 66 years old. The newspapers reported he died from heart failure brought on by other health issues. It was also reported he had been suffering from Alzheimers Disease, though it is more likely it was CET from his years in the ring. He should not be forgotten.