The musical Fun Home now playing at the SpeakEasy Stage Company is deeply moving and complex. Based on the graphic memoir of the same title by Alison Bechdel, it tells the story of of Ms Bechdel’s childhood and her coming out as a lesbian while in college. However, this is not a story simply about a young woman coming to terms with her sexuality. It is much more complicated than that. In reality, her coming out is not the center of the story.

The play opens in, what seems to be, the happy home of the Bechdels (Welcome To Our House on Maple Avenue). Alison’s father, Bruce (Todd Yard), is an English teacher as well as a director of a funeral home. The title of the play is taken from the shortened and more enjoyable name the Bechdel children use for the family business. Alison has two brothers, Christian (Cameron Levesque) and John (Luke Gold).

Alison is played by three actors depicting her at different ages. There is Small Alison (Marissa Simeqi), Medium Alison (Ellie van Amerongen), and present day Alison (Amy Jo Jackson). The play does not follow a chronological order, but rather follows the present day Alison as she looks back on events in her life while drawing cartoons as she relives the various times. Much of the time she is sitting at a writing desk or standing off to the side looking on and drawing as her memories are played out by the others. She makes comments as she observes. I found this very effective as it is common for people to look back on their lives as if they are witnessing a play or a movie. Trying to figure it all out can get complicated, and this story is no different when it comes to complications.

Those complications are not so much in Alison’s coming to grips with her own sexual identity, she does quite well with that, but more with her father’s having to deal with his. It turns out Bruce is gay and has never come out. He has gotten into trouble for “procuring alcohol for underage boys”. Tyler Simahk, last seen at SpeakEasy in Allegiance plays multiple roles as the young men Bruce procures beer for. He is also somewhat controlling, not abusive, of his children, and it is easy to gather that controlling behavior is reflective of his attempts to control his own behavior. It is painful to watch him struggle.

In the song Maps Alison talks about drawing maps of the neighborhood as a child. At one point she says about her father “I can draw a circle, his whole life fits inside”. That line had me thinking of how trapped Bruce must have felt.

Bruce eventually killed himself by stepping in front of a truck. This was not long after Alison came out, and she says “My beginning would be your end”. These words are powerful as they so strongly convey the torment in not being able to live who you are openly. Alison was fortunate, though it still wasn’t easy, to have come of age in a time when she could find support and acceptance. Bruce had to live his life in the shadows and with guilt and anger that was turned within.

One of the most powerful moments in the play is when Alison’s mother Helen (Laura Marie Duncan) sings Days and Days:

”Welcome to our house on Maple Avenue
See how we polish and we shine
We rearrange and realign
Everything is balanced and serene
Like chaos never happens if it’s never seen.”

In which she laments her life, feeling she wasted it in attempting to be the good wife.”

“Don’t you come back here

I didn’t raise you

To give away your days

The song is strong and delivers the message of how living lies is painful to all involved. Fortunately, Alison has learned that difficult lesson.

While this story is one that involves much struggle and pain, it also has its happy moments. Although Bruce was in much pain and controlling, he was also a loving father. The children loved him and Helen, as well as each other. The song Come To Fun Home is a rousing number sung by the three siblings as they pretend to make a commercial for the funeral home. It is somewhat of a cross  between the Osmands and the Jackson Five, and all much fun. Marissa Simeqi, Cameron Levesque, and Luke Gold bring the house down while dancing around a casket, and taking turns singing into a can of Pledge used as a microphone.

Desire Graham plays Joan, the understanding, though edgy, friend Alison makes on campus and who eventually becomes her lover. Joan may be a bit tough but she is kind, and just the supporting figure Alison needed

Amy Jo Jackson in her role as present day Alison comes across as thoughtful and wise. It is interesting watch her expressions as she observes and begins to understand her life as it evolved  Often, when looking back we see ourselves with a more sympathetic eye. It is good when we can cast that view onto our present day selves. We can learn that from Alison Bechdel.

Book and Lyrics by Lisa Kron

Through November 24 at the Calderwood Pavillon

Runs October 19 Through November 24 At The Calderwood Pavilion 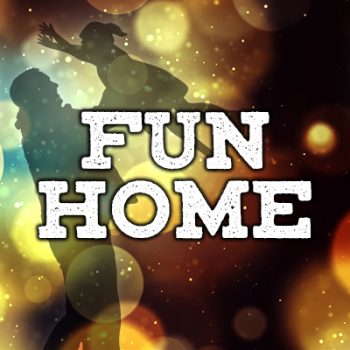 FUN HOME will run from October 19 through November 24 at the Calderwood Pavillon, 527 Tremont Street in Boston’s South End. Featuring music by Tony Award winner Jeanine Tesori and a book and lyrics by Tony Award winner Lisa Kron, FUN HOME is a landmark musical about seeing one’s parents through grown-up eyes. Based on Ms. Bechdel’s best-selling memoir of the same name, this groundbreaking musical introduces us to Alison at three different ages, revealing memories that celebrate the curiosity of childhood, the challenges of coming out, and the complexities of family.

SpeakEasy Founder and Producing Artistic Director Paul Daigneault will direct this production of FUN HOME. Winner of three Elliot Norton Awards including the 2014 Norton Prize for Sustained Excellence, Mr. Daigneault had directed dozens of Boston premieres, including the company’s recent productions of The Scottsboro Boys, The Curious Incident of the Dog in the Night-Time, and Allegiance.

FUN HOME will run for six weeks, from October 19 through November 24, 2018, in the Roberts Studio Theatre in the Stanford Calderwood Pavilion at the Boston Center for the Arts, 527 Tremont Street in Boston’s South End.