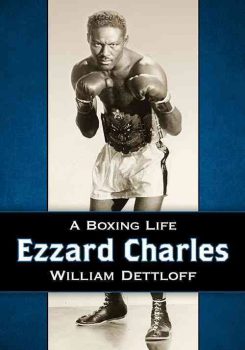 Ezzard Charles was not someone you would look at and think of as vicious fighting machine. He looked more like a member of Duke Ellington’s jazz band. He was also very mild mannered with a gentle air about him. As a kid in Lawrenceville, Georgia and later in Cincinnati, Ohio he was friendly but quiet. He did always love boxing and dreamed of one day becoming a world champion.

In 1949, after an amateur career and almost ten years of fighting pro he attained his dream by beating Jersey Joe Walcott for the title Joe Louis had vacated. Unfortunately for Charles he had two things against him. He was stepping into the shadow of the beloved Louis, and he did not possess the exciting and dramatic style of the Brown Bomber. The public just did not take to him. It’s not like Charles hadn’t earned respect. He had fought and beaten a number of the Black Murder’s Row fighters. He had two wins over the very great Charley Burley as well as a decision win and a knockout over Archie Moore.

It has often been said that Charles is the most underrated of all heavyweight champions.

While Charles may have looked more like a piano teacher out of the ring, when the bell rang he was a brutal competitor. As I was reading William Dettloff’s excellent biography of Charles I couldn’t help thinking that Ezzard had to have a lot of anger in him that he could only express in the prize ring. He could also be erratic in his performances, sometimes not looking motivated enough to win convincingly. Charles would be a ripe candidate  for some psychoanalysis, and in fact, before his rematch with Rocky Marciano the press, in an effort to drum up interest in the fight had a psychiatrist visit the camps of both fighters. The doctor described Charles as “A dreamer type…who loses the spontaneity in his dreams” because of his many “inhibitions”. Interesting insight even if it was just hype to sell tickets.

Mr. Dettloff has done exhaustive research on the life and fighting career of Ezzard Charles. He takes us to the tragic night in 1948 when Charles fought Sam Baroudi. Baroudi would be carried from the ring and die the next day. Ezzard was devastated by this tragedy, but just three months later would step back into that same ring and knock out the very formidable Elmer “Violent” Ray. In fact, he would fight four more times in 1948 including a win over Jimmy Bivins.

Charles would continue winning and fighting often, finally landing a fight with Jersey Joe Walcott for the vacant heavyweight crown. Beating Walcott may have made him champion, but he still had to live in the shadow of Joe Louis. He defended the title numerous times and even went on to defeat his idol Louis in a brutal fifteen round affair that should have removed all doubt to his legitimacy as champion. It did not. The problem was, as Dettloff points out, Ezzard Charles was not Joe Louis.

This lack of public support may have had something to do with his not always being to motivate himself. Another reason was his fighting so often and against such tough competition. Ezzard rarely got an easy opponent. In fact, in reading this biography we are treated to a history of the light heavyweight and heavyweight divsions in the 1940s and 50s. Mr. Dettloff gives brief but very interesting biographies of many of Charles’s opponents; Archie Moore, Walcott, Bivins, Harold Johnson, Bob Satterfield, and many others. This all makes for a very interesting book.

Dettloff also introduces us to many of the characters who occupied the world of boxing during that era. One of the most quotable was Charles’s manager (he had many) Jake Mintz. Mintz could twist the English language in amazing ways. For example, when recounting surgery he had to repair a hernia he said “They thought I had some golf stones there so they took an autograph of my heart and said, ‘One of your ulsters is worn out’. William Shakespeare would be envious.

There are also other interesting facts related here. It turns out a young Charles while serving in the military fought a three round exhibition with Joe Louis. Also, while training for his bout against Bob Satterfield the Charles people brought in a crude young heavyweight by the name of Sonny Liston to be a sparring partner. Liston was not up to the task at that point in his career.

After Charles lost the title to Walcott, and a rematch with Jersey Joe, it looked like his hopes of ever regaining the title were over. He began campaigning for another shot at the title but lost back to back matches against Nino Valdez and Harold Johnson. Charles was getting tired and old, but he did come back to life with wins over Satterfield and Coley Wallace. It was enough to earn him a shot at the new and exciting young champion Rocky Marciano.

Dettloff writes about this fight in detail. He discusses Charles’s training and strategy for the fight, a strategy that at first glance may have sounded foolish but made sense. Ezzard went into the Marciano bout motivated to win but came up short. He did earned the distinction of being the only man to take the Rock the full 15 rounds and came closer than any fighter to taking the title from him, though the decision was clearly in Marciano’s favor.

Charles would get a rematch based on this performance, and even though he severely cut Rocky’s nose, he just did not have anything left. Though he would continue to fight on for another four years it was all downhill from there. He would end up broke, take up professional wrestling, and struggle to make ends meet. His final years were spent suffering from Lou Gehrigs Disease. A very tragic end for such a great fighter.

William Dettloff has written a fine biography of a great champion, and one that Ezzard Charles deserves. Boxing fans should take the time to read this very interesting book and learn about this man who deserves to be remembered. It has often been said that Charles is the most underrated of all heavyweight champions. Mr. Dettloff has down a terrific job in changing that history.