Should Buchanan Have Been Declared The Winner
By Disqualification?

(This piece was first published in the Boston Post Gazette in January of 2014.)
It was June 26, 1972 and the very popular Lightweight Champion from Scotland Ken Buchanan was stepping into the ring to defend his title against the challenger from Panama, Roberto Duran. Buchanan won the title in 1970 by outpointing champion Ishmael Laguna over 15 rounds under a very hot sun in San Juan, Puerto Rico. That same year the New York Boxing Writers’ Association named him Fighter of the Year, the first time a non American was so honored. Ken was an active champion in both defending his title and also participating in non-title matches. He was well liked by fans in the United States. 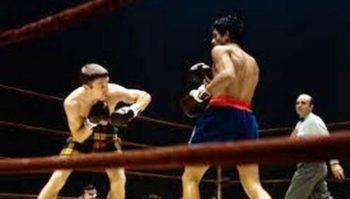 Duran was a relative unknown at the time of the fight. He had built up an impressive undefeated record scoring 28 straight wins with only four lasting the distance and eleven ending in the first round. He had just one fight in the United States scoring a sensational one round knockout over journeyman Benny Huertas in NY on September 13, 1971. Was he a great knock out artist or just another unknown with a padded record? His trainers Ray Arcel and Freddie Brown knew the answer to that. They were two of the best in the business and worked hard to develop Duran’s raw power into savvy boxing skills.

The fight took place in Madison Square Garden before 18,000 fans. From the opening bell Buchanan knew he was in for a rough night as he hit the canvas within the first minute. Duran pressured and hammered the game Buchanan round after round. Bulling him into the ropes and slamming him with everything in his arsenal.

Despite the onslaught, Buchanan fought back gamely.

Despite the onslaught, Buchanan fought back gamely.He used a very fast jab in an attempt to keep Duran at bay, but the challenger was able to counter that with a very sharp and powerful right hand. Duran was rough, tossing in elbows and a number of blows that were low as well as shoving and pushing Buchanan through the ropes. He was warned only once by referee Johnny LoBianco about the low blows, and that wasn’t until the 12th round.

The fight was all Duran with Buchanan maybe winning one or two rounds going into the 11th. This is where I noticed a change in the dynamic of the fight. While the champion certainly wasn’t turning the tide, he was continuing to fight hard and hadn’t slowed down. It was at this point I saw Duran becoming frustrated with his inability to stop or to again floor Ken. He started getting wild with his punches and was talking to Buchanan.

He started getting wild with his punches and was talking to Buchanan.

It was a frustration that I would later see in his rematch with Ray Leonard, the famous No Mas Fight. Duran just had to keep the pressure on and continue with his game plan to win a decision, but he desperately wanted a knock out. In the corner you could see Ray Arcel getting angry with Roberto and urging him to calm down. Duran was starting to turn this into a more difficult fight as Buchanan was beginning to land on him. I am by no means implying Ken was taking charge of the fight, but it was becoming interesting. It also has to be remembered that Buchanan won the title by coming on in the late rounds against Laguna. In boxing it truly ain’t over till it’s over. 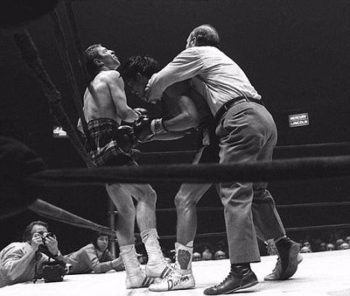 Now for the controversy: The bell rings for the 13th round and Duran comes out with fire in his eyes. He is all over the champion who continues to fight back gamely. Ken still has plenty of life left in his legs and is not going to give up his championship easily. Duran bulls him to the ropes, and fires away at him, but Roberto’s punches are wider now, he is also getting hit with more jabs. He desperately wants to end the fight. He has Buchanan against the ropes when the bell sounds ending the round. After the bell rings Duran fires a right hand to the body that lands well below the belt line. The champion falls to the canvas in great pain. He is taken to his corner where the referee takes a quick look at him and stops the fight giving the title to Duran.

Gil Clancy, who was working Ken’s corner that night, made no protest over the stoppage. That was very odd behavior coming from the usually outspoken Clancy. When referee Johnny LoBianco was interviewed by commentator Don Dunphy immediately after the fight he told Don it was not a low blow, and if it had been it would make no difference as it was “impossible’ to be hurt by a low blow because of the protective cup being worn by the fighter. Look at the photo of the punch being landed and you will clearly see it was low. If it had been called a low blow by the ref, Buchanan would have been given five minutes to recover. Also,

LoBianco did admit the punch landed after the bell.

LoBianco did admit the punch landed after the bell.He said he stopped the fight because of that blow, and if it hadn’t landed he would have allowed the fight to continue. He clearly states he ended the fight because of the blow, which by his own admission, was landed illegally. He states that Buchanan was in no condition to continue because of that punch. Going by LoBianco’s own words, Duran should have been disqualified and Buchanan allowed to retain his title. I know Duran was well ahead in the fight, but this fight ended because of an illegal blow, a fact that was acknowledged by the referee.

Questions linger. Why did Clancy remain silent? At the very least a protest would have ensured a rematch. Why did Duran’s team refuse to fight Buchanan again? Why did LoBianco never referee another championship bout? And finally, did we see a flaw in Duran that night that would lead to his quitting against Leonard years later? I believe Duran was one of the greatest fighters of all time. He was devastating, but as with all great fighters, he had his flaws. He would get frustrated with fast moving boxers, and, even though he would be beating them, he would become impatient if it appeared he was being outboxed.

As controversies go, I am sure this doesn’t rate high on a lot of fight fan’s lists, but I still think there are questions to be answered. I have included video of the 13th round including the interview with referee LoBianco aCheck out the fight and pay attention to the interview with LoBianco as well as footage of the entire fight. See what you think.