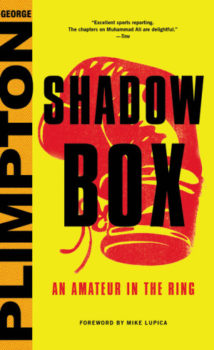 Every young man who steps into a boxing ring for the first time sees himself as a future champion. Appearing so basic in its nature, prizefighting is the one sport where it doesn’t take a lot of imagination to see one’s self as landing that knock out blow against the champion and taking the title. Reality is a bit different.

For many, that first experience getting punched on the nose by a blow that seemed to come out of nowhere is enough to send even the most imaginative packing and leaving the gym never to return. For others, it is just the thing that gets the adrenalin flowing and the desire spiked to move forward in pursuit of the nearly impossible dream.

George Plimpton was the editor of the The Paris Review from 1953 until his death in 2003. He was also a frequent contributor to Sports Illustrated Magazine. Mr. Plimpton earned a reputation as a participatory journalist by stepping onto the mound to throw against a number of MLB All Stars, play quarterback briefly for the Detroit Lions (he lost thirty yards in his few minutes on the field), and being beaten at golf by Jack Nicklaus and Arnold Palmer among other things.

In 1960 he also decided to experience boxing first hand. Now most people would have gone to a boxing gym and taken a few lessons, stepped in with a sparring partner of similar experience and gotten a good taste of what it is like to be in the ring. Not so in Plimpton’s case. His first choice of opponent was Heavyweight Champion Floyd Patterson. When that arrangement failed to materialize he moved down a weight class and sought out Light Heavyweight Champion Archie Moore. The Old Mongoose agreed to meet George in the ring at Stillman’s Gym in New York City.

He recounted his session with Moore in Shadow Box: An Amateur In The Ring first published in 1977 and now reissued by Little Brown as part of a delightful set of the sports books by George Plimpton. This title is one of seven in the group, and it is a wonderful read.

I first read Shadow Box in 1977 while I was still active in the ring. Rereading it now has brought back so many memories of that time when boxing was quite different than it is today.

Mr. Plimpton begins with his bout with Archie Moore. He took this match quite seriously enlisting a professional boxing trainer to prepare him for the fatal day. He also read numerous books on the subject and learned he was not unique among writers in getting into the ring with a champion boxer. The poet Arthur Craven, reputed to be the nephew of Oscar Wilde, fought Heavyweight Champion Jack Johnson in Paris. It should be noted that Mr. Plimpton fared much better in his match against Archie Moore.

George had one fatal flaw as a boxer, something he called the “sympathetic response”. This was an involuntary reaction to being hit that resulted in tears flowing from his eyes giving the appearance he was crying. This reaction was a far cry from the Sonny Liston stare and would hardly send chills done the spine of an opponent.

The three rounds with Moore went well in front of a large crowd that had gathered in Stallman’s for the event, and George was very proud of the bloody nose he came away with.

The book moves on from there to many interesting experiences Mr. Plimpton had in the boxing world as well as some wonderful stories about authors such as Ernest Hemingway, Norman Mailer, and Truman Capote. In one of these tales we learn of how the author attempted to arrange a meeting between Hemingway and Mailer, but it never happened. Perhaps, this was for the better as any restaurant the two would have met in almost certainly would have been busted up. We also learn that Mailer was undefeated at thumb wrestling.

Some of the best parts of the book are about the time Mr. Plimpton spent with Muhammad Ali and his covering both the first Frazier fight as well as the Foreman fight in Zaire.

The author was in Ali’s dressing room immediately after the Frazier bout and describes the pain Muhammad was in after his fifteen rounds with Joe. Most fans are not aware of just how much punishment boxers take in a fight, and this was no ordinary fight. Ali was exhausted and in excruciating pain. He could barely walk. I am sure the situation was as bad if not not worse in the Frazier camp. Mr. Plimpton’s wonderful writing brings this moment in boxing history vividly to life.

The last portion of the book is devoted to Ali’s fight with Foreman in Africa. After the press had arrived the bout was postponed for six weeks due to a cut eye the champion received in training. Being so far from home the writers stayed in Zaire for the six weeks. This leads to a number of tales such as the one where Norman Mailer thought he was going to be eaten by a lion.

Mr. Plimpton spends a number of pages writing about Hunter Thompson. Thompson was sent to cover the fight for Rolling Stone Magazine but didn’t go to the bout. I really don’t know why so many pages are devoted to Thompson as I really never understood why he was ever taken seriously, but it is an insight into the time.

The author talks quite a bit about Drew Bundini, Ali’s sidekick. Mr. Plimpton refers to him as Ali’s trainer. In one depressing scene Ali belittles Bundini and slaps him in the face in front of a roomful of reporters. Mr. Plimpton, who worshiped Ali, says he hated him at that moment.

Shadow Box is a delight. It is a book by an author who is a master with words. A man who brings the enthusiasm of the dedicated boxing fan along with just enough knowledge of the sport to make it all come alive. It is a book about the sport when it was much different and much more exciting. That excitement comes through on every page. If you have not already read Shadow Box, I urge you to do so. if you read it years ago, go to it again. You will not be disappointed.