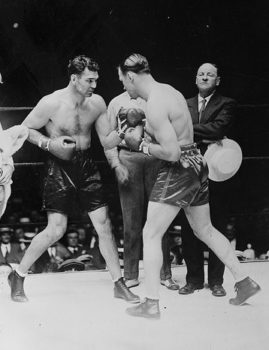 On September 23, 1926 Jack Dempsey lost the Heavyweight Championship of the World to Gene Tunney. Dempsey had been inactive for three years before the bout while Tunney had been racking up wins and staying sharp. After the bout there was a clamor for a rematch, but things were a bit different in those days. Even a former champion had to earn his right to a return title bout.

Dempsey, while champion, had agreed to fight Harry Wills but the fight fell through when the promoters failed to come up with Dempsey’s guarantee. Instead, Dempsey went on to face Tunney. Meanwhile, Boston heavyweight Jack Sharkey was compiling a solid record of wins including beating Harry Wills by disqualification. Though Jack won by a foul because Wills was repeatedly backhanding the him, the outcome was never in doubt as Sharkey had administered a severe beating to Wills before the fight was called in the 13th round. This paved the way for a Dempsey vs Sharkey bout with the winner to face Gene Tunney for the title.

Going into the fight Sharkey had gone unbeaten in his last 13 bouts with wins over such men as George Godfrey, Jimmy Maloney, and Mike McTigue. Sailor Jack was brash, cocky, colorful, and a bit erratic. He was also supremely confident he would beat Dempsey. The oddsmakers agreed with him making Sharkey a 7-5 favorite.

The public was very enthused with this matchup as 82,000 fans showed up at Yankee Stadium on July 21, 1927 to witness the fight. Celebrities were there in abundance including Admiral Richard Byrd, Composer Irving Berlin, Flo Ziegfeld, and theatrical producer David Belasco. The gate was an amazing $1,083,530.00, the largest for a non title fight. Dempsey received $252,759.00 and Sharkey’s share was $208,803.00, huge money for the time.

Both fighters were in great shape, but Sharkey was seven years younger and hungry for a title shot. While Dempsey had showed signs of slowing down he was, well, he was still Jack Dempsey and not one to take lightly. The Manassa Mauler was in there to win.

After receiving instructions from referee Jack O’Sullivan the bout began. Sharkey came out very strong in the first round and had Dempsey hurt almost immediately. Sharkey was fighting beautifully, using a very effective right uppercut and a marvelous jab to keep Dempsey off balance. He continued beating Dempsey to the punch for six rounds and it only appeared to be a question of whether or not Sharkey would win by kayo or decision. It did not look good for the former champ.

Though taking a beating, Dempsey was tenacious. He was also doing a very effective job of going to Sharkey’s body. Jack Dempsey knew he couldn’t stand up straight and trade head shots with Sharkey, so he did what he did best, he fought out of his famous crouched attacking the midsection. While Dempsey was hurting Sharkey with those body shots, he was paying a heavy price having to absorb Sharkey’s uppercut and solid left jab. It is overlooked, but Sharkey had one of the best left jabs in the history of the heavyweight division.

As I have written, it just appeared to be a matter of time until the fight went to Jack Sharkey. However, if you watch closely you can see how the body punches were starting to bother Sharkey. As a matter of fact, he came into the ring wearing his trunks quite high in anticipation of Dempsey banging away to the breadbasket. He could use the high waist line as a way to argue Dempsey’s blows were low and hope the referee would warn him to keep his punches up. Sharkey had won three fights in addition to the Wills fight by disqualification. Was it possible he was using that as an ace in the hole in case things weren’t going well? If he did it certainly backfired on him. 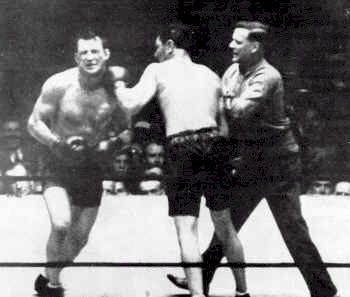 At the bell for the seventh round Dempsey stepped up his attack on Sharkey’s body. If you look closely at the film you can see Sharkey was being bothered by those blows. With about thirty seconds gone in the round Dempsey landed lefts and rights to the body. He landed a right hand to Sharkey’s body that appears to land just about at the belt line. Now remember, Sharkey wore his trunks high so this would be in legal territory. Even if his trunks were worn at normal height the belt line is still fair game.

Here’s my take on this controversial fight; Sharkey was being worn down by Dempsey’s relentless body punching. He had hit the former champ with everything he had and Dempsey just would not slow up. Sharkey had thrown a lot of punches. Combine that with the brutal body punches he absorbed and, even though he was way ahead in the bout, he was wearing down. The final right hand Dempsey landed to the body hurt Sharkey a lot. That’s when Sailor Jack made the fatal mistake of dropping his hands and turning to the referee to complain he had been hit low. The second Dempsey saw that opening he fired off a left hook to the face that floored Sharkey. Referee O’Sullivan counted the Gob out.

Now, that punch may have felt low to Sharkey because it was a brutal shot, but I think Jack had had enough of getting hit to the body and was going to try for the disqualification win. The mistake he made was in complaining to the referee while still on his feet. If he had dropped to the canvas and grabbed his groin he may have gotten somewhere with the complaint. Dropping his hands while within punching range of the great Jack Dempsey was about the dumbest thing he could have done. Sharkey broke the first rule of boxing, “Protect yourself at all times.”

Jack Dempsey would go on to have a rematch wth Gene Tunney in what would turn out to be another controversial fight that became known as The Long Count. Sharkey would also be involved in a controversial fight when he took on Max Schmeling for the title vacated by the retirement of Gene Tunney. In this bout Sharkey would lose by a disqualification when Max claimed to be hit by a low blow. Schmeling was a little smarter than Sharkey as he dropped to the canvas before complaining to the referee. Things may have been different if Jack had one the same with Dempsey.