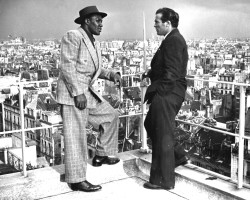 The photo of Holman Williams and Marcel Cerdan which accompanies this article, having a conversation on a Paris rooftop has always fascinated me. I first saw it in the International Boxing Research Organization Journal, and Dan Cuoco, the director of that fine organization shared it with me. On July 7, 1946 Williams and Cerdan fought each other in Paris with Cerdan winning a decision over the American. Holman Williams was one of a group of boxers that came to be known as The Black Murderers’ Row. Others in this elite crowd were Charley Burley, Cocoa Kid, Eddie Booker, Bert Lytell, Loyd Marshall, Jack Chase, and Aaron “Tiger” Wade. All were great fighters who never got a shot at the title partly because of race, and partly because they were just too good. Author Harry Otty has written a fine book chronicling the careers of these boxers who deserve to be recognized by all boxing fans. His book, “Charley Burley and The Black Murderers Row’’, is a must read for anyone interested in the history of the sport.

In this photo, we see Williams who is at this point on the downside of his career, speaking with Cerdan who would two years later win the Middleweight Title from Tony Zale. I don’t know if this was taken before or after the bout, but it is interesting to see how intently they are listening and speaking to each other. This is not a photo of two wise mouth punks talking trash to each other, but of two professionals, of two gentlemen spending some time together. Are they talking about their fight? About boxing in general and the techniques they use? Perhaps they are having a conversation about the cultural scene in Paris. What I find striking is how relaxed they are with each other. These are two great fighters who would, or have already, put on a very tough fight; yet they are completely at ease in each other’s company. In this photo, both men convey class and dignity. The backdrop of Paris further enhances them. Both are impeccably dressed and could easily pass for a couple of writers or actors. It is a snapshot of a very different and interesting time. Take a moment to study this picture and let your mind wander to just what their conversation was about that July afternoon on a rooftop in Paris. 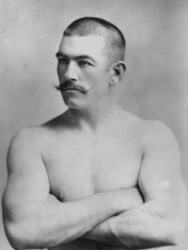 John L. Sullivan was America’s first larger then life sports star, and author Christopher Klein has written a fine account of the Boston Strong Boy. Sullivan, the son of Irish immigrants who had arrived in Boston during the great wave of Irish migration in the mid nineteenth century, was born in Boston’s South End, not Roxbury as many have believed. He made a reputation for himself at an early age with his amazing strength, intimidating stare, and powerful right hand punch.

Klein’s book follows Sullivan’s life in detail and shows just how the Great John L was the right man at the right time to win the adoration of fans nationwide. His fistic talent along with his magnetic personality and booming voice made him an instant celebrity. But, he never would have attained the prominence he did had it not been for the completion of the intercontinental railroad system. This feat of technology, comparable with the internet today, allowed Sullivan to crisscross the country putting on exhibitions and taking on all comers in four round matches. For the first time, Americans were able to see one of their heroes up close, sometimes too close, because Sullivan’s proclivity to drink would make him a very difficult character to control.

I learned much about John L from Klein’s book. Many things I didn’t know, such as the fact that after Gentleman Jim Corbett defeated Sullivan for the crown, the men would later engage in at least two exhibition matches. That Sullivan was a somewhat talented actor who loved performing on the stage, and that he was the first athlete to earn over a million dollars, most of which went to living the high life. The only fault I find in this book is that often times I found myself wanting more details about some of the events, such as the time in Augusta Georgia where Sullivan, who had been drinking heavily grew so verbally abusive that a train hand knocked him out. Surely, this was a big deal, and I would love to have had more details about that incident. I found this book a very interesting read and highly recommend it.

This Sunday a live boxing show will take place out doors at City Hall Plaza in Boston. It is the Neighborhood Youth challenge and will feature a team of young amateurs from the local gyms going up against a team of boxers from Connemara, Ireland. Outdoor boxing in Boston is a bit of a throwback to the days of the Great John L and should be a lot of fun. I hope to see you there.